Statutesandstories.com salutes the service of George H. W. Bush and wishes condolences to the Bush family. 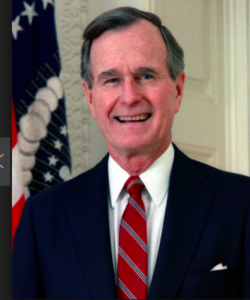 Here is a link to a video of President Bush’s August 18, 1988 acceptance speech at the GOP national convention, the “kinder, gentler” nation speech.

This eight minute obit video does justice to the life of a just man:

Here is a link to the full text of his 1988 acceptance speech, by arguably the most successful one term president who will be missed.