George Washington’s personal copy of the Constitution, the Bill of Rights and the Acts of the First Congress was published by Francis Childs & John Swaine in New York in 1789. The book is annotated by President Washington with margin notations in the sections that discuss presidential power.

It was sold at auction by Christies in 2012 for $9,826,500. At the time of its sale, it set a record price for an American book or historic document. The book is now housed at the George Washington library at Mount Vernon.

George Washington’s copy of the Acts of the First Congress (located at the Mt. Vernon library): 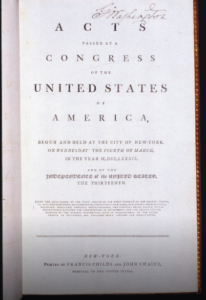 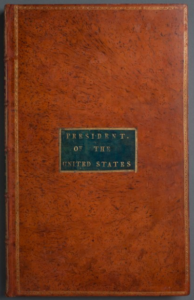 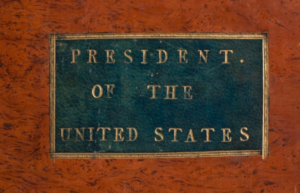 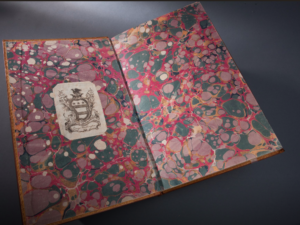 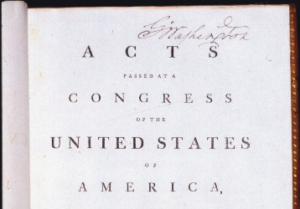 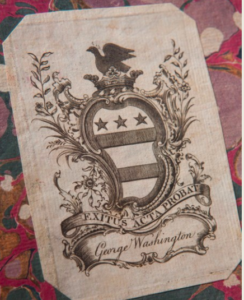 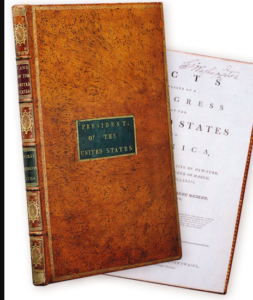 Francis Childs and John Swaine were prominent New York City printers that published several works from the first Congress that met in New York and Philadelphia.

In addition to various individual bills and the Journal of the House of Representatives, Childs and Swaine printed in book form the entire complied set of Acts of the First Congress, including the text of the Constitution along with the first 12 proposed amendments that were submitted to the states. For the next decade, Childs and Swaine continued to print congressional acts and records through 1798 (during the period that Congress was located in New York and Philadelphia).

While Childs and Swaine published The House Journal for the first and second sessions of the first Congress, John Frenno was the early publisher for the Senate. When Congress relocated to Philadelphia in 1790, both publishers moved along with Congress to its new location.

The cost of early Congressional publishing was not insignificant. In 1794, Congress allocated $10,000 for printing, including such expenses as firewood and stationary. GPO, Keeping America Informed, The U.S. Government Publishing Office: A Legacy of Service to the Nation p. 4 (2016)

Other publications by Francis Childs & John Swaine (click on the links below):

• Journal of the House of Representatives (1789)

• Report of the Secretary of State, on the subject of establishing a uniformity in the weights, measures and coins of the United States. Published by order of the House of Representatives

• Report of the commissioners, appointed by the President of the United States of America, to confer with the insurgents in the Western counties of Pennsylvania (Philadelphia : Printed by Francis Childs and John Swaine, 1794)

• Laws passed in the Territory of the United States North-West of the River Ohio: from the commencement of the government to the 31st of December, 1791