The Laws of the United States in three volumes, published with authority (compiled by Zephaniah Swift; published by Richard Folwell)

•  The first official compilation of the Acts of Congress. Clarence E. Carter, “Zephaniah Swift and the Folwell Edition of the Laws of the United States,” American Historical Review 39, no. 4 (1934): 689-95.

•   One of only four compilation ever authorized by Congress.

•   For many years, the work was wrongly attributed to the publisher, Richard Folwell, and is still commonly referred to as “Folwell’s Statutes.”

•    Includes copies of the Constitution, the Bill of Rights and the Treaty of Paris.

•    Contains all the Acts passed by the First through Fourth Congresses.

The Act authorizing publication of the so-called Folwell edition was entitled “An Act for the more general promulgation of the laws.” The Secretary of State was authorized to print 4,500 copies, at public expense, with an index prepared by Zephaniah Swift. All 4,500 volumes bear the imprint date of 1796, even though volume 3 contains the acts passed by the 4th Congress which lasted until March 3, 1797. Five hundred copies were intended for distribution to Congress. The remaining 4,000 copies were to be apportioned among the states and territories on the basis of population.

As the first ever compilation of laws of the United States, Swift’s detailed index was the first index of its kind. As described by Swift, the purpose of the index was to “exhibit under proper and particular heads…a fyftematic abridgment of the laws with a like reference to the pages.”

Interestingly, the the federal government was small enough that the detailed index, 126 page index, was organized around only 33 “general headings.”

Here are links to John Adams’ copies held by the Boston Public Library:

Here are links to another digitized copy at the College of William & Mary: 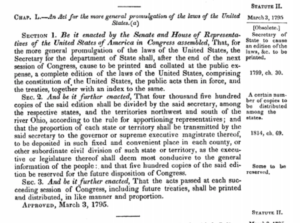 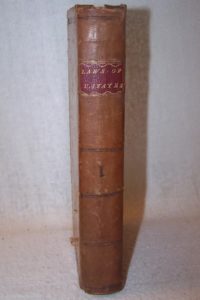 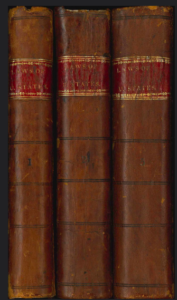 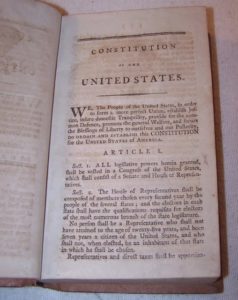 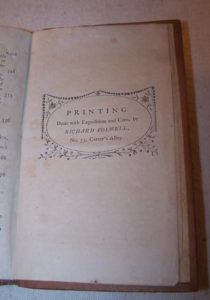 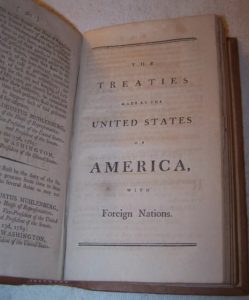 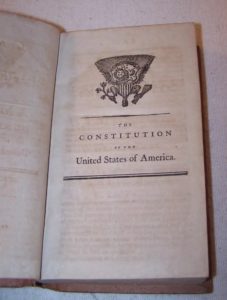 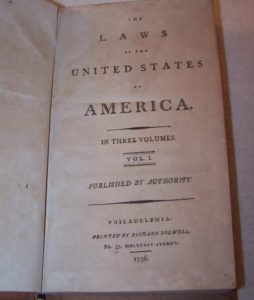 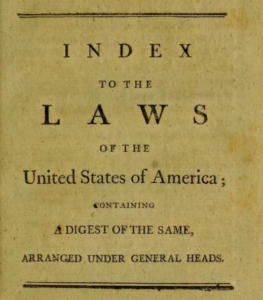 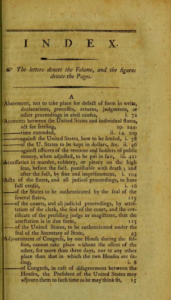 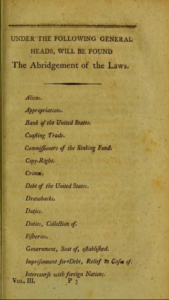 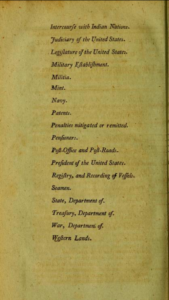 Click here for a discussion of this historic volume, which was one of only four official editions authorized by Congress.

Click here to view the three volume set rebound in modern calf leather with marbled boards, for sale at the following link Abebooks: The Laws of the United States of America. In three volumes

Seller’s description: Ownership signatures of John Pintard, a founder of the New York Historical Society and the Massachusetts Historical Society. He is considered “the father of historical societies in America,” according to the online Sons of Liberty Chapter of the Sons of the American Revolution. These volumes bear the rubberstamp of his New York Historical Society, with superimposed discard. In volume III the owner, perhaps Pintard himself, has tabbed page 345, ‘An Act for the Relief of Persons Imprisoned for Debt,’ a fate that had befallen Pintard. “The third volume though dated 1796 was not printed before 1797. Contains the acts passed by the first, second, third, and fourth Congress. This edition published under an order of the Congress of the United States, has many peculiar advantages. There is one copious, luminous Index (in Volume three), compiled by Zephaniah Swift, esq., referring to all the volumes, and comprising in itself a complete Digest of all the Laws of the United States.” Evans. FIRST EDITION. Evans 32973. Bookseller Inventory # 32408 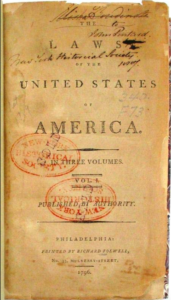 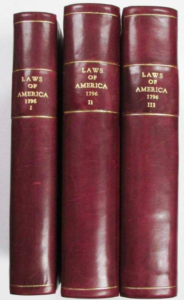