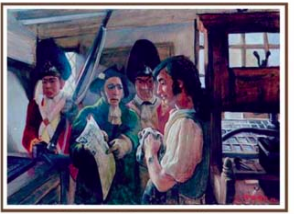 (Copyrighted original artwork reprinted with permission from D. W. Roth.  Images and custom portraits are available at davidwellsroth.com. Here is a link to David Wells Roth’s entire commission of Isaiah Thomas artwork, which is on display in the Union Oyster House in Boston:  http://davidwellsroth.com/artwork/union-oyster-house/).

This entry is not about a particular statute, but rather tells the story of a heroic revolutionary era newspaper printer who went on to become the leading publisher and philanthropist of his generation. As a member of the Sons of Liberty, Thomas worked closely with revolutionary leaders, including John Hancock, Sam Adams, and Paul Revere. A publishing prodigy, Thomas became the “trumpet of the Revolution.” After the War “the father of the press in New England” became one of the wealthiest Americans of his day owning a vertically integrated publishing company, with sixteen presses, its own paper mill, bindery, and bookstores in several states. During his lifetime Thomas printed over 900 books, including law books, textbooks, songbooks, and the first ever illustrated bible published in America. 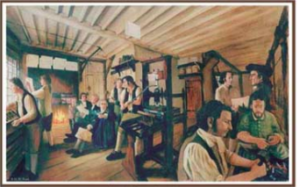 Revolutionary Era: Isaiah Thomas (1749-1831) and his family were abandoned by his father at the age of six. The Overseers of the Poor of the Town of Boston could only image the impact Thomas would have when they indentured him to a childless printer, Zechariah Fowle.

In 1770, Thomas founded what would become one of the most politically important colonial newspapers, the Massachusetts Spy (also known as Thomas’ Boston Journal). His print shop became known as the “Forge of Sedition” because it served as a meeting place for the Sons of Liberty. The unapologetically patriotic publication was considered treasonous by the British, leading royal governor Thomas Hutchinson to order that Thomas be prosecuted for malicious libel in 1771. Thomas continued his work undeterred when the grand jury refused to indict him. It is claimed that John Adams was prepared to represent Thomas.

Loyalists attempted to intimidate Thomas by burning him in effigy. He likewise refused to be silenced by Red Coats marching past his office who threatened that he would be the next to be tarred and feathered. When four additional regiments of British troops and royal artillery landed in Boston on July 7, 1774, Thomas was only further emboldened. He revised the masthead on his paper to display Paul Revere’s depiction of Benjamin Franklin’s famous 1754 “Join or Die” segmented snake battling a giant dragon (symbolizing Britain). Silversmith and engraver Paul Revere was a lifelong friend and professional colleague of Thomas. The new masthead continued to be displayed on all subsequent editions of the paper until the Spy ceased operations in Boston on April 6, 1775. The Spy later resumed operations in Boston in 1788 with its new motto borrowed from the new Massachusetts Constitution proclaiming that “The Liberty of the Press is essential to security and freedom.” To read more about the Massachusetts Constitution click here. 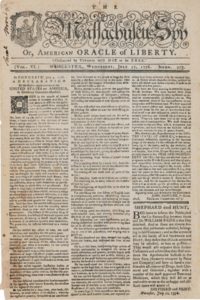 Thomas reported the first eyewitness account of the battles of Lexington and Concord, after escaping Boston with the assistance Dr. Joseph Warren (the President of the Massachusetts Provisional Congress, author of the Suffolk Resolves, and future “hero of the Battle of Bunker Hill”). Thomas was advised by John Hancock to remove from Boston immediately, which he did on April 16, 1775. He left Boston “during the dead of night” for Worchester with his printing press and family.

Thomas fled to the Tory stronghold of Worcester just as General Gage was preparing to strike through Lexington to destroy colonial munitions in Concord. When Warren received word from highly placed informants that Gates had issued orders to arrest Sam Adams and John Hancock, he dispatched Paul Revere and William Dawes on their famous “midnight rides” to warn Adams and Hancock. Thomas used his network of post riders (who normally delivered papers), to “alarm the countryside” about the movement of British troops toward Lexington on April 18. On the the fateful day of April 20, 1775, Thomas “joined the provincial militia in opposing the King’s troops” at Lexington. 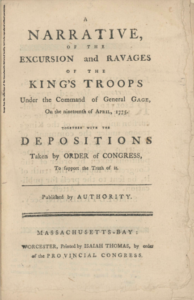 Thomas personally reported and printed a series of depositions by eyewitnesses to the battles of Lexington and Concord entitled, A Narrative of the Excursion and Ravages of the King’s Troops Under the Command of General Gage, On the Nineteenth of April, 1775. Together with the Depositions Taken by Order of Congress, To Support the Truth of It. Click here for a link. This short publication – with a long title – would publicize the depravity of the British and solidify resistance by the colonies. The narrative publication was rushed to England ahead of the royal governor’s official report of the battle.

After the War:  In the 1780s Thomas branched out to become a book publisher and arguably the most important early American printer alongside Benjamin Franklin.

Thomas printed the first American dictionary, bibles, educational works, songbooks and books for children.  His literary works included The Power of Sympathy published in 1789 by William Hill Brown, the first novel by a native American author.  Thomas also published magazines. His New-England Alamanck was enormously profitable, growing from three thousand copies in 1781 to twenty-nine thousand by 1797. 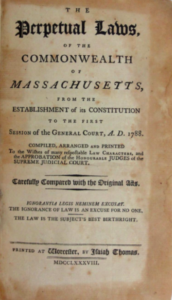 Thomas printed the first collection of Massachusetts statutes up to the year of the ratification of the U.S. Constitution. The Perpetual Laws of the Commonwealth of Massachusetts, including the U.S. and Massachusetts Constitutions (the world’s oldest functioning constitution) was purposely printed in a smaller size and at a lower price to facilitate wide scale distribution. Click here for a link to the 1788 edition of the Perpetual Laws. Other legal publications included an early American edition of Blackstone’s Commentaries on the Laws of England.

His History of Printing in America, with a Biography of Printers, and an Account of Newspapers (1810) was the first book of its kind, surveying  printing between 1640 and 1800. The book remains a reliable primary source on early American publishers and publications. The work is included in the Grolier Club’s One Hundred Influential American Books Printed Before 1900.  Click here for a link to the History of Printing in America, Vol. I. (1810).  Click here for Vol. II. 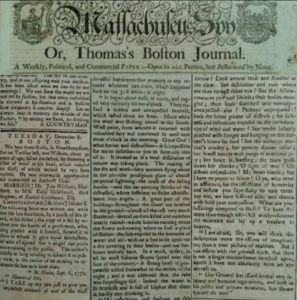 Alexander Hamilton fans are familiar with the hurricane that struck the island of St. Croix in 1772. Thomas’ newspaper republished young Alexander Hamilton’s “first refrain” about how “devastation reigned” and the “testament to his pain,” as immortalized by Linn-Manual Miranda. Click here for a discussion of Hamilton related materials housed at the American Antiquarian Society, including Hamilton’s reprinted letter published in Thomas’ Massachusetts Spy newspaper. 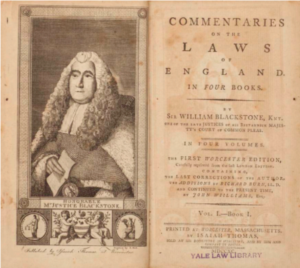 Reporting the War: Freedom of the Press from the America Revolution to the War on Terrorism, John Byrne Cooke (2007)

Paul Revere and the World He Lived In, Esther Forbes (1942) 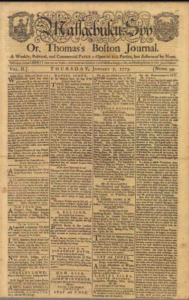 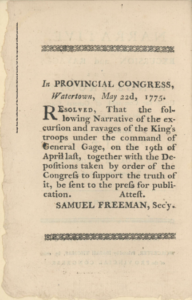 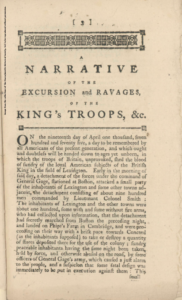