“An Act establishing the temporary and permanent seat of the government of the United States.”

Alexander Hamilton, the nation’s first Secretary of Treasury, was directed by the newly 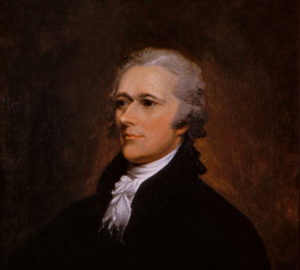 elected Congress to evaluate the country’s accumulated Revolutionary War debt.  In January of 1790, Hamilton detailed in his Report on the Public Credit that federal debt exceeded $54 million and the states owed an additional $25 million. Hamilton devised a comprehensive strategy for the debt to be “funded,” but he need political support for his plan.  (For a discussion of Hamilton’s Report on the Public Credit and the Assumption of State Debt click here).

The portrait on the right was painted in 1806 by John Trumbell.

Hamilton argued that all revolutionary debt should be consolidated together, with the new federal government assuming state debt (whether owed to Americans or foreigners). Hamilton’s plan called for the creation of a national bank, the restoration of national credit and the issuance of new federal bonds paying regular interest at definite dates. The states had fought the Revolutionary War for the nation’s independence, Hamilton argued, so the federal government should cover the cost. Yet, the southern states had made progress paying down their colonial debt and did not want to be taxed to pay off the outstanding northern and federal debt. South Carolina, for example, had paid down 83% of its war debt. 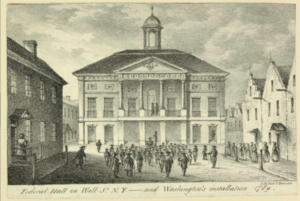 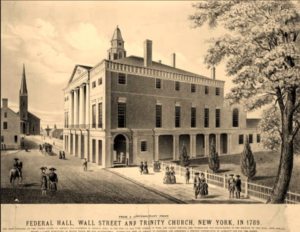 To overcome southern opposition Hamilton, negotiated to move the nation’s new capital to Virginia in exchange for James Madison’s support. Hamilton, Madison and Jefferson are believed to have arrived at the grand compromise during dinner on June 20, 1790 at Jefferson’s residence in New York located at 57 Maiden Lane (in the Financial District near Wall Street).  As recounted in Lin-Manuel Miranda’s musical, the deal was struck “in the room where it happened.” Click here for the lyrics (from Aaron Burr’s perspective).

At the time, Virginia was the nation’s most populous and influential state and strongly desired to have the capital located nearby. Additional political support was generated by agreeing to temporarily relocate the national capital from New York to Philadelphia, where the Continental Congress had originally met. The Act narrowly passed with a vote of 32 to 29.

The Residence Act originally intended to cover construction costs with the proceeds from the sale of  land in the District of Columbia. The lack of demand led to funding shortages and construction delays. Nevertheless, Congress moved to Washington ahead of schedule. President John Adams believed that doing so would assist with his re-election, but he was defeated by his Vice President, Thomas Jefferson.

Background: Article I, Section 8, Clause 17 of the Constitution authorized Congress to create a new district as the federal government’s permanent seat of government as follows: “To exercise exclusive Legislation in all Cases whatsoever, over such District (not exceeding ten Miles square) as may, by Cession of Particular States, and the Acceptance of Congress, become the Seat of the Government of the United States, and to exercise like Authority over all Places purchased by the Consent of the Legislature of the State in which the Same shall be, for the Erection of Forts, Magazines, Arsenals, dock-Yards, and other needful Buildings.”

Primary documents, including debates and maps (Library of Congress) 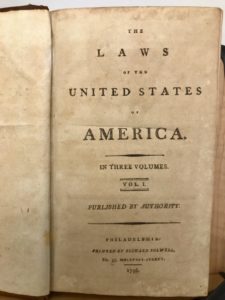 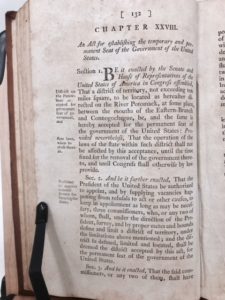 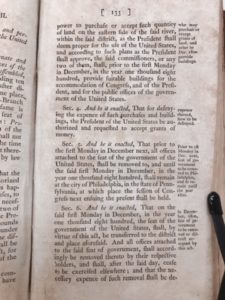 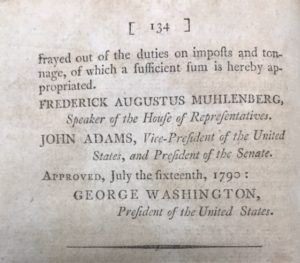