In honor of Veterans Day, statuesandstories.com has compiled below several posts which tell the story of the laws establishing the finest fighting force in the history of the world.

To all veterans and their families: We salute you and thank you for your service. 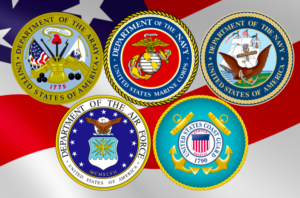 Act Establishing the War Department (1789): The War Department was established by one of the first acts of the First Congress. Henry Knox was appointed by President Washington as the first Secretary of War. Despite Anti-Federalist fears of a standing army, Washington and Knox oversaw the growth of military forces which had largely been disbanded after the Revolutionary War. This post provides background about the Continental Army which was created by the Second Continental Congress and its re-establishment by the First Congress in 1789.

The Militia Act of 1792: President George Washington understood that “[t]o be prepared for war is one of the most effectual means of preserving peace.” President Ronald Reagan would later popularize the same concept of “peace through strength.” This post describes the early efforts by the Second Congress to provide for a well regulated militia, in response to horrific military losses at the Battle of the Wabash River.

The Act Establishing the Navy (1798) tells the story of the re-establishment of the Navy by President Adams and the Fifth Congress, at a time when America was gearing up for war with France. The Continental Navy had been disbanded following the American Revolutionary War and needed to be rebuilt from the ground up. The construction of six frigates was authorized by Congress, including the USS Constitution (known as Old Ironsides).

The Marine Corp Act (1798) was also established by President Adams who recognized that the military had degraded and was ill-equipped to successfully defend the nation during the undeclared Quasi-War with France. Further hostilities were avoided when President Adams concluded the Treaty of Morfontaine with Napoleon, which opened the door for President Jefferson to later negotiate for the Louisiana Purchase.

The Act Providing for More Effective Collection of Duties, creating the Coast Guard (1790). After the Continental Navy was dismantled following the American Revolution, the Coast Guard (also known as the Cutter Service/Revenue Marine) was the nation’s only naval force during the first decade after establishment of the U.S. Constitution. The first cutter, the Massachusetts, was commissioned in 1791.

The Conscription Act (1863) was the nation’s first military draft imposed by President Lincoln when it became clear that a purely volunteer army was incapable of winning the Civil War and preserving the union.

The history of military benefits for our veterans is told in a series of posts about the inadequate Revolutionary War Pensions. In 1776, at the request of General George Washington, the Continental Congress simultaneously attempted to encourage military enlistment while limiting desertion by granting half pay for life in cases of loss of limb or other serious disability. The first Federal Military Pensions were made possible by Alexander Hamilton’s financial plan to restore federal credit and assume state debt. During the Battle of Yorktown the combined American and French forces defeated the British to end the Revolutionary War.

Hamilton’s Whiskey Tax (the first internal revenue law) led to rioting in Western Pennsylvania and the Whiskey Rebellion. In 1794, George Washington invoked the Militia Act of 1792 and personally led 13,000 troops from Virginia, Maryland and New Jersey to arrest the protestors, who were later pardoned. As recognized by historian Joseph Ellis, this would be the “first and only time a sitting American president led troops in the field.”

The holiday of Veterans Day originally began to celebrate “Armistice Day,” the anniversary of the end of World War I. Congress formally recognized the national holiday in 1926. While Memorial Day honors those who made the ultimate sacrifice for their country, Veterans Day pays tribute to all veterans who served. The story of the U.S. entrance into World War I is told here, along with a discussion of the wartime laws that were adopted by the 65th Congress.