On May 26, 1836, the House passed a resolution that automatically tabled all anti-slavery petitions. For the next eight years, from 1836 to 1844, Congressman (and former President) John Quincy Adams sought to repeal the so-called “gag rule” which was reintroduced at each Congress until Adams succeeded in repealing it on December 3, 1844.

The first version of the gag rule, otherwise known as the Pinckney Resolutions, provided that “All petitions, memorials, resolutions, propositions, or papers, relating in any way, or to any extent whatsoever, to the subject of slavery or the abolition of slavery, shall, without being either printed or referred, be laid on the table and … no further action whatever shall be had thereon.”

When the gag rule was adopted the First Amendment’s right “to petition the government for a redress of grievances” was taken seriously. Constituent petitions were read aloud during the first month of each new session of Congress. After the first thirty days, petitions were read aloud every other Monday. Each petition was then printed and assigned to the appropriate committee, which would decide whether and how to address it.

Beginning in 1834, the American Anti-Slavery Society and other abolitionist groups began antislavery petition drives. By 1838, more than 130,000 petitions were sent to Congress proposing the abolition of slavery in Washington, DC.

In subsequent sessions of Congress, as the volume of petitioners grew, stricter versions of the gag rule were adopted. In turn, this prompted more support for Adams’s argument that the gag rule violated constitutional rights of all Americans, regardless of one’s view on slavery. In 1840, the House of Representatives passed its most extreme version of the gag rule, banning the very acceptance of antislavery petitions.

Adams did everything in his power to oppose the gag rule, which had to be reintroduced at each new Congress. For example, in February of 1837 Adams incurred the wrath of many in the House when he submitted a petition from 22 slaves. Adams’ opponents attempted to strip him of a committee chairmanship and tried to censure him. Eventually, his Southern colleagues realized that censuring him would only draw more attention to Adams’ cause. Ultimately, such efforts only convinced growing numbers of Northerners that slavery was an affront to the civil liberties of all Americans.

After his term as President, Adams served 17 years in the House of Representatives. To “gag” citizens who petition their government, he asserted, was a “direct violation of the Constitution of the United States, of the rules of this House, and of the rights of my constituents.” For eight years Adams used every parliamentary procedure available to challenge the gag rule, gaining popularity in the process, which encouraged even more antislavery petitions. Adams began receiving death threats in 1837 and was receiving approximately three per week in 1839. Referred to as Old Man Eloquent for his rhetorical abilities, Adams finally succeeded in suspending the gag rule on December 3, 1844.

Here is a link to the Congressional journal entry on December 3, 1844 memorializing the repeal of the gag rule:

Click here for images of a gag rule motions and petitions: http://recordsofrights.org/events/7/the-gag-rule-silencing-abolitionists

John Quincy Adams is believed to be the first former president to be photographed. The daguerreotype pictured below can be found in the National Portrait Gallery. 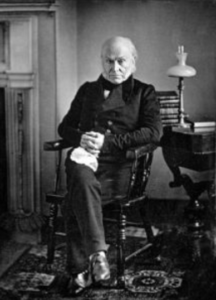