Act Prohibiting the Importation of Slaves of 1807

The 1807 Act prohibited the importation of slaves into the United States from abroad. Yet, the Act did nothing to reduce the domestic slave trade within American borders, which continued without limitation. Historians believe that the 1807 Act had the perverse effect of strengthening the domestic slave market rather than leading to a gradual demise of slavery as abolitionists had hoped.

One of many constitutional compromises was contained in Article 1, Section 9, of the Constitution which prevented Congress from outlawing the “importation” of slaves until 1808. This constitutional provision placed a minimum twenty-year grace period on the international slave trade, but also provided a possible mechanism to end it. While Congress could not ban the slave trade during this twenty-year period, individual states were free to do as they thought “proper.”

Abolitionists at the Constitutional Convention believed that ending the foreign slave trade was a necessary first step to ending slavery in America. Yet, they could not have been more wrong. During the twenty years between 1787 and 1807 record numbers of slaves were imported. The children of slaves automatically became slaves, thus guaranteeing a self-sustaining slave population.

The first anti-slavery law adopted by Congress was the Slave Trade Act of 1794. Because the domestic slave trade was constitutionally protected through at least 1807, the 1794 act merely prohibited the making, loading, outfitting, equipping, or dispatching of any ship to be used in the trade of slaves “to any foreign country.”

Copied below are links to the Slave Trade Act of 1794:

To his credit, President Thomas Jefferson proposed enactment of a prohibition on the slave trade during his 1806 State of the Union Address on December 2, 1806. Despite holding contradictory beliefs, Jefferson had supported the idea of abolishing the slave trade since the 1770s. In his widely reported December 1806 address to Congress President Jefferson denounced the “violations of human rights” attending the international slave trade and called for its criminalization as soon as possible by withdrawing from “all further participation in those violations of human rights which have been so long continued on the unoffending inhabitants of Africa, and which the morality, the reputation, and the best interests of our country, have long been eager to proscribe.”

The Act Prohibiting the Importation of Slaves was adopted in March of 1807 but did not become effective until January 1, 1808, thus providing slave traders nine months to cease operations. The Act imposed heavy penalties on international slave traders but lax enforcement drove the slave trade underground. If a slave trading ship was apprehended, it was not uncommon for the slaves to be resold rather than freed. The underfunded U.S. Navy ships charged with enforcing the 1807 were referred to as the “African Squadron.” 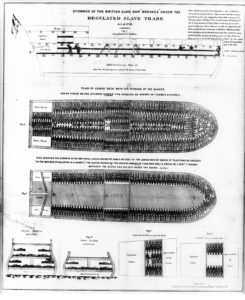 By the 1850s, annual “Southern Commercial Conventions” were calling for the repeal of the 1807 Act. It was argued by southern pro-slavery extremists  (“Fire-Eaters”) that if “it is right to buy slaves in Virginia and carry them to New Orleans why is it not right to buy them in Cuba, Brazil, or Africa and carry them here?” Fire-Eaters believed that repealing the foreign slave trade would lower prices for slaves, make the South more competitive, help counterbalance immigration into the North, and help preserve Southern representation and power in Congress. The 1858 Convention voted to recommend the repeal of all laws against importation of slaves, with only delegates from the upper South opposed to the foreign competition. It is noteworthy that the upper South heavily benefited from the domestic slave trade.

More slaves were imported between 1787 and 1807 than during any prior 20 year period. Arguably this was an unintended consequence of Article I, Section 9’s twenty year ban on anti-slavery legislation. During the half century after the 1807 Act, the slave population of the United States exceeded that of any other country in the Western Hemisphere.

In 1807, the Southern slave population exceeded four million. By 1865, some 12 million Africans had been shipped across the Atlantic. It is estimated that more than one million died during the horrific voyage known as the “middle passage.”

The publication shown below is from a soft cover original blue-grey “wraps” copy with a paper spine over stitched binding as issued, of the Acts of the Second Session of the 9th Congress.

Text of the Act 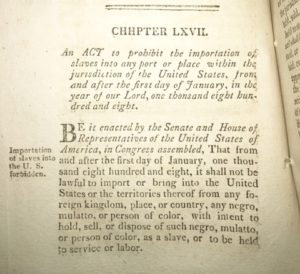 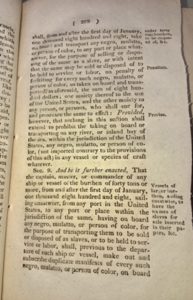 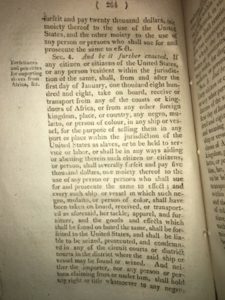 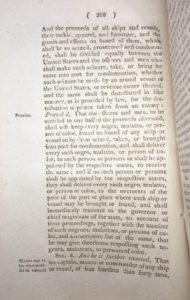 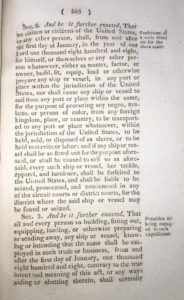 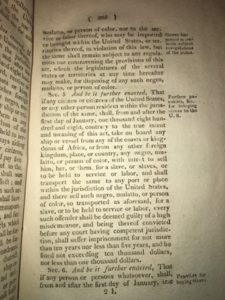 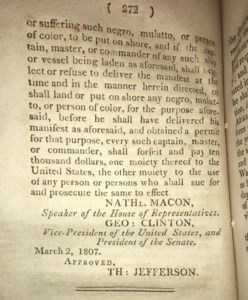 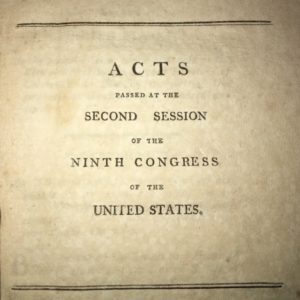 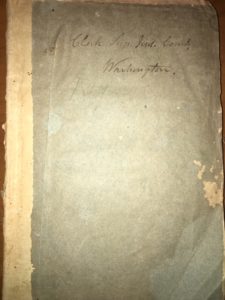