Background: In conjunction with Alexander Hamilton’s bill to create the Bank of the United States, Hamilton also submitted to Congress a detailed Report on Establishing the Mint. As described by historian Ron Chernow, “a week after after the Senate approved his bank bill, Hamilton handed beleaguered legislators yet another hefty document.” Hamilton’s exhaustively researched report proposed the use of a silver dollar as the basic unit of monetary value, the implementation of a decimal system, and placing the United States on a bimetallic standard using both gold and silver. 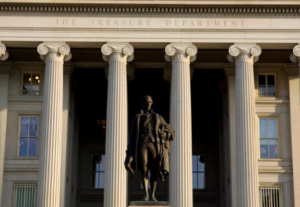 In preparing his report, Hamilton consulted economic texts including Adam Smith’s The Wealth of Nations and Malachy Postlethwayt’s Universal Dictionary of Trade and Commerce  (vol 1 and volume 2), each of which had written about monetary policy. Hamilton also heavily relied on Sir James Steuart’s Principles of Political Economy. Although less well known today, Steuart was the most widely read economist in colonial America. Hamilton also referred to Sir Isaac Newton’s 1717 Report on the Value of the Guinea. While many are aware that Newton was a leading figure in the Scientific Revolution, it is less widely known that he was the “Master of the Mint” in England for thirty years. 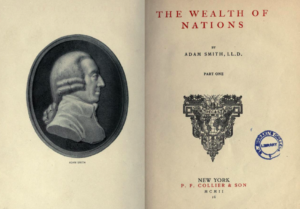 Hamilton was also able to build upon proposals for a national system of coinage that had been submitted to the Continental Congress. In particular, Hamilton was able to borrow from prior proposals by Thomas Jefferson. Thomas Jefferson’s 1790 “Report on Cooper Coinage” recommended the use of a decimal based system rather than the cumbersome British system (which used the guinea, pound, half guinea, half pound, double crown, crown, half crown, shilling (known as a “Bob”), six pence, half groat, two pence, penny, half penny, farthing/quarter penny). Click here for Jefferson’s “Report on Weights and Measures.” It is clear that both Hamilton and Jefferson became experts in this field and cooperated in their early days in Washington’s cabinet. Click here for correspondence between Hamilton and Jefferson in April of 1791.

After reading a draft of Hamilton’s report, Jefferson replied with high praise:

I return you the report on the mint which I have read over with a great deal of satisfaction. I concur with you in thinking that the unit must stand on both metals, that the alloy should be the same in both, also in the proportion you establish between the value of the two metals. As to the question on whom the expence of coinage is to fall, I have been so little able to make up an opinion satisfactory to myself as to be ready to concur in either decision.

A decade earlier, Robert Morris and Gouverneur Morris submitted their own proposal for a mint. The framers of the Constitution recognized the importance of a national currency and empowered Congress in Article I, Section 8, “To coin Money, regulate the Value thereof, and of foreign Coin.”

In his Third State of the Union Address on October 25, 1791, President Washington explained his reasons wanting to mint American coins. In particular, Washington and Hamilton believed that wider availability of lower denomination currency would benefit the poor:

The disorders in the existing currency, and especially the scarcity of small change, a scarcity so peculiarly distressing to the poorer classes, strongly recommend the carrying into immediate effect the resolution already entered into concerning the establishment of a mint. Measures have been taken pursuant to that resolution for procuring some of the most necessary artists, together with the requisite apparatus.

Hamilton wanted to encourage the use of a national currency and reduce inefficient bartering, as part of his plan for a unified national economy. To promote patriotism, Hamilton proposed that National Coins feature presidential and emblematic designs with great beauty and workmanship. “The perfection of the Coins is a great safeguard against counterfeits. And it is evident that the colour as well as the excellence of the workmanship is an ingredient in that perfection.”

Act Establishing the Mint: The Act adopted by Congress agreed with Hamilton’s proposal that the new federal government would benefit from its own national currency. At the time, the capital of the United States was temporary located in Philadelphia while Washington, D.C. was being built. Nevertheless, Section 1 of the Act provided that the Mint shall be situated at the seat of government in Philadelphia, where it remains to this day. 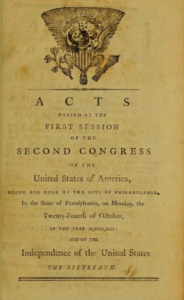 Section 1 of the Act identified five officers that were responsible for operating the Mint, a Director, Assayer, Chief Coiner, Engraver and Treasurer. The Director was authorized to employ “as many clerks, workman and fervants, as he fhall from time to time find neceffary, subject to the approbation of the President.” As a result, the U.S Mint Police traces its origin back to 1792, as one of the oldest federal law enforcement agencies. 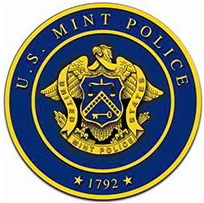 All officers and employees were required to take an oath before a federal judge that they would faithfully and diligently perform their duties. Officers were also required to post a $10,000 surety bond. The penalty for embezzlement from the Mint was severe. Section 19 of the Act provided that if an officer or employee debased any coins or embezzled from the Mint they “shall suffer death.”

The Act specified that the “proportional value” of gold to silver in currency should be 15 to 1 (making one troy ounce of gold equivalent to 15 ounces of silver). The denominations, values and descriptions of the coins were specified in Section 9 of the Act.  The gold Eagle coin was to contain 247.5 grains of pure gold compared to the silver dollar which the Act specified should contain 371.25 grains of pure silver.

Section 10 of the Act required that one side of the coin should contain “an impression emblematic of liberty, with an inscription of the word Liberty, and the year of the coinage.” On the reverse of each gold and silver coin the Act called for a figure or representation of an eagle with the inscription United States of America. The Lincoln penny, issued in 1909 to commemorate the centenary of President Lincoln’s birth, was the first U.S. coin to depict a real person. Prior coins displayed various depictions of “Lady Liberty” or the Roman Goddess of “Liberty.” Nevertheless, it was rumored that Martha Washington was the inspiration for the  half dime minted in 1792.

Pursuant to Section 14, any person could bring gold or silver bullion to the Mint to be assayed and coined free of charge. A half percent charge was incurred if the owner wanted an immediate exchange of bullion for coins. This policy of “free coinage” continued for many years while the U.S. was using a bi-metallic standard to value currency.

Section 16 provided that all gold and silver coins struck at the Mint shall be lawful tender in all payments whatsoever. The Act further specified that the silver dollar should be pegged to the value of the Spanish silver dollar. At the time Spanish reales were the most commonly used and trusted currency in America.  To make change, it was not uncommon to cut the Spanish dollar into eight pieces or “bits” (which were known as “pieces of eight”). To Hamilton, the use of a domestically minted currency would not only be more convenient, it would also be a hallmark of American independence.

To “better secure a due conformity of said gold and filver coins to their refpective standards”  quality control measures were specified. For example, from each separate mass of gold or silver, three coins were required to be set aside by the treasurer. Every year on the last Monday in July, the Act provided that the Chief Justice, the Secretary of Treasury, the Comptroller of the Treasury, the Secretary of State, and the Attorney General would supervise as sample coins were assayed and tested.  These annual meetings would later be formalized into the U.S. Assay Commission. 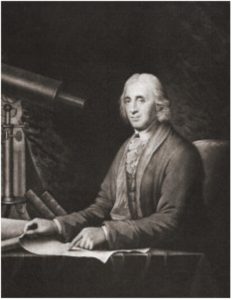 The Act was adopted on April 2, 1792. Less than two weeks later, Washington nominated David Rittenhouse of Pennsylvania to be director of the Mint. The salaries for officers was specified by Section 6, ranging from $2,000 per year for the Director, $1,500 per year for the Chief Coiner and Assayer, $500 for clerks, and “customary and reasonable” wages for subordinate workman and servants according to their respective stations and occupations.

Rittenhouse was a well respected scientist, mathematician and philosopher who had built America’s first astronomical observatory. In nominating Rittenhouse, Washington followed Hamilton’s recommendations, which were contained in a list of 40 names provided by Hamilton, organized by state. Both Hamilton and Jefferson urged Rittenhouse to accept the Director position.

Rittenhouse paid $4,266.67 to purchase two lots for the Mint in Philadelphia on July 18, 1792.  Not wasting any time, the very next day Rittenhouse began demolition of an abandoned whiskey distillery on the property. Within three months the first building was ready for installation of a smelting furnace. The Philadelphia Mint was the first public building constructed by the federal government. The three-story brick structure housed its gold and silver holdings in basement vaults. On the first floor the building contained weighing rooms and a press room (where coins were minted). Staff offices were located on the second floor. The assay office was located on the third floor. 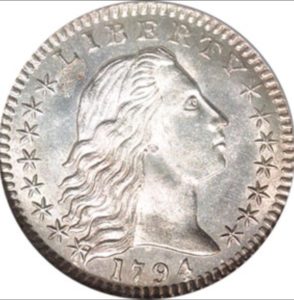 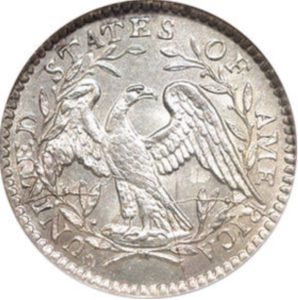 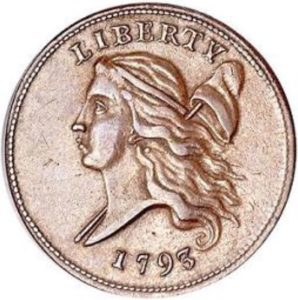 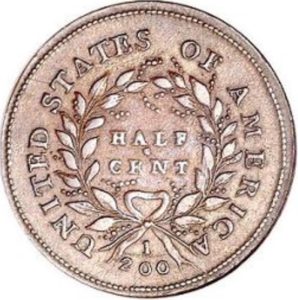 The first coins struck by the Mint were silver “half dimes,” which may have been made from silverware provided by George and Martha Washington. The first coins put into circulation were copper cents. Hamilton recognized that poor Americans, who were forced to barter, would greatly benefit from wider availability of cooper coins. According to Hamilton, coins “of very small value are a great accommodation and the means of a beneficial economy to the Poor; by enabling them to purchase, in small portions, and at a more reasonable rate, the necessaries of which they stand in need.” At the time, the daily wage for workers was less than $1 per day. By comparison, members of Congress were paid 50 cents per day, which was increased to $1 per day in 1795 and $6 per day in 1796.

In his first two years as Treasury Secretary Hamilton worked at a frantic pace to produce the following thoroughly researched, exhaustive reports for Congress with accompanying legislative proposals. Click here for Hamilton’s Report on Public Credit; Report on Defects in Existing Revenue Laws; Report on a National Bank;  Report on Establishing a Mint; Report on Manufactures; and Report on Marine Hospitals.

Prior to leaving office as Secretary of Treasury, the ever dilligent Hamilton summarized additional recommendations for the Mint. Click here for Hamilton’s January 31, 1795 letter to Washington.

Today the U.S. Mint has facilities in Philadelphia, Denver, San Francisco, West Point, New York, and of course, Fort Knox, Kentucky, which are protected by the U.S. Mint Police.

Click here for a link to John Adams’ copy of the Act.

History of the Monetary Legislation and of the Currency System of the United States (John McVey, 1896)

Notes on Hamilton’s Report on the Mint (Founder’s Archive)

History of the Bank of New York (BNY-Mellon)

State of the Union History 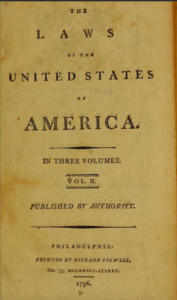 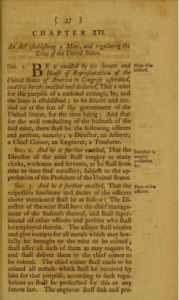 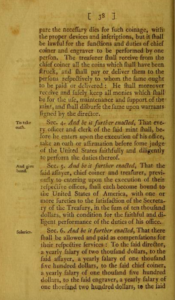 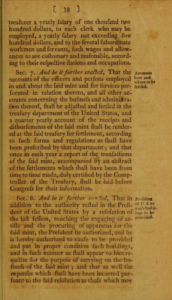 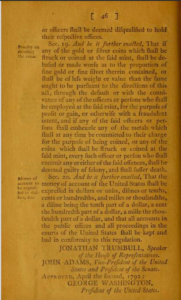