The Statutes at Large of South Carolina, edited under the Authority of the Legislature (Thomas Cooper, ed. 1836-1840) 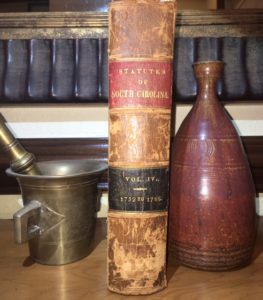 Cooper was one of the leading public intellectuals of his generation, among a very crowded field. John Adams described Cooper as “a learned, ingenious, scientific and talented madcap.” Click here for a link to Adams’ letter of July 22, 1813 to Thomas Jefferson. Jefferson was a good friend and admirer of Cooper, who served as the first professor of natural science at the University of Virginia. Click here for a link to Jefferson’s letter of 9/1/1817 to Cooper describing Jefferson’s plans for the University of Virginia. Cooper was also personal friends with President James Madison and was recognized by Madison for his work on “Congreve” rockets which were used by the British during the War of 1812. Click here and here for letters from Cooper to Madison summarizing his analysis.

According to Jefferson “Cooper is acknowledged by every enlightened man who knows him, to be the greatest man in America, in the powers of mind, and in acquired information; and that, without a single exception.” Click here for a link to Jefferson’s letter of March 1, 1819 to Joseph Carrington.

Cooper studied law and medicine at Oxford. It is believed that he didn’t graduate because he refused a religious test required at the time. Cooper came to America in 1794 with chemist Joseph Priestly (who is credited with having identified ten gases and discovered oxygen). Cooper was the first to develop a commercially feasible method of producing chlorine and hypochlorite for bleaching. Cooper collaborated with James Watt on the use of autoclaves. Cooper emigrated to America rather than returning to England where his outspoken views and support of the French Revolution subjected him to persecution. Cooper had spent time in France during the French Revolution but became disillusioned when the Revolution turned violent.

Cooper was an agitator by nature. During his career he was a professor of Chemistry and Chair of the Chemistry Department at the University of Pennsylvania and Dickinson College. He resigned and/or was expelled from multiple positions, including the University of Virginia, for his outspoken stands and religious views. Apart from his expertise in law, medicine, chemistry, mineralogy, and geology, Cooper was also a political philosopher. 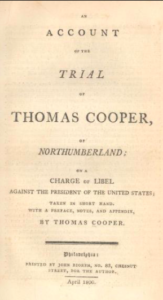 When he arrived in America Cooper was a vocal supporter of the Anti-Federalists and agitated against the Sedition Act. In 1799, Cooper was critical of President John Adams. He was convicted, fined and imprisoned for libel, serving a six month prison term which only made him more popular with the emerging Democrat-Republican party. 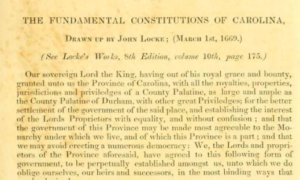 In his college classes, during public lectures, and in numerous pamphlets, Cooper railed against protectionist tariffs and in favor of free trade and states rights. Cooper argued among other things that the “Tariff of Abominations” of 1828 was discriminatory against the South and justified nullification. Cooper argued that each state was a sovereign power, duty bound to protest against tyrannical acts of the Federal government.
In a letter to Thomas Jefferson, John Adams commented on Cooper’s relationship with Joseph Priestly:
If Priestley had lived, I Should certainly have corresponded with him. His Friend Cooper, who unfortunately for him and me, and you, had as fatal an influence over him as Hamilton had over Washington; and whose rash hot head led Priestley into all his Misfortunes and most his Errors in Conduct could not have prevented explanations between Priestley and me.
Interestingly, Adams felt that Cooper exercised undue influence of Priestly similar to the influence that “Hamilton had over Washington.” Click here for a link to Adams’ July 22, 1813 letter to Jefferson. This observation is particularly interesting coming from Adams, who arguably shared personality traits in common with Cooper. The fact that Adams expressed this opinion to Thomas Jefferson also noteworthy.
His works include the first American treatise on bankruptcy law, written while Cooper was in prison for sedition in 1800. Click here for a link to THE BANKRUPT LAW OF AMERICA, COMPARED WITH THE BANKRUPT LAW OF ENGLAND (Thomas Cooper, 1801). 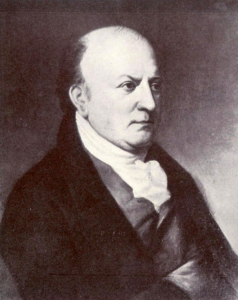 His other works include Political Essays (1800); An English Version of the Institutes of Justinian (1812); Lectures on the Elements of Political Economy (1826); A Treatise on the Law of Libel and the Liberty of the Press (1830); a translation of Broussais’ On Irritation and Insanity (1831), various essays including, “The Scripture Doctrine of Materialism,” “View of the Metaphysical and Physiological Arguments in favour of Materialism,” and “Outline of the Doctrine of the Association of Ideas.

Cooper’s biographer, Dumas Malone, argues that “Perhaps no man of Cooper’s generation did more than he to advance the cause of science and learning in America.” Click here for a link to Dumas Malone’s THE PUBLIC LIFE OF THOMAS COOPER 1783–1839 (AMS Press 1979)

The Libel Trial of Thomas Cooper

An Account of the Trial of Thomas Cooper of Northumberland on a Charge of Libel against the President of the United States (Thomas Cooper, 1800)

An Early History of the University of Virginia (Nathaniel Cabell, 1856)

A Treatise on the Law of Libel and the Liberty of the Press (Thomas Cooper, 1830)

Copied below are links to Coopers’s nine volume Statutes at Large of South Carolina (the last few volumes were completed by David McCord):

Volume 1 (Acts of a Constitutional Character)

Volume 8 (Acts relating to Corporations and the Militia) 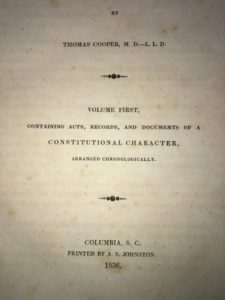 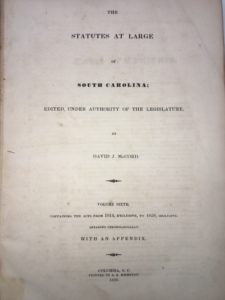 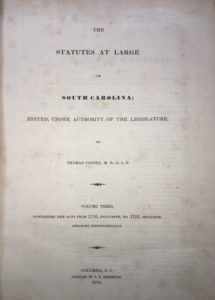 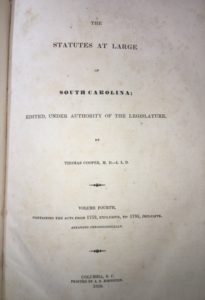 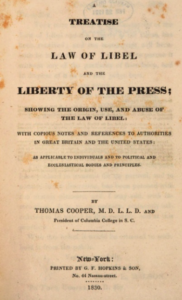 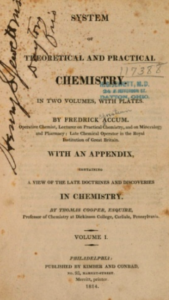