Alexander Hamilton and the abolition of slavery in New York

Alexander Hamilton is best known for his role promoting a strong central government as a leading framer of the Constitution and the nation’s first Treasury Secretary. Hamilton also deserves credit for the gradual abolition of slavery in New York between 1799 and 1827. While historians may disagree over Alexander Hamilton’s tactics and priorities opposing slavery, it is clear that Hamilton was one of New York’s leading abolitionists, who before his death put his home state on the track to peacefully eliminate slavery. As described below, New York banned the importation of slaves into the state in 1788. A decade latter, in 1799, New York began the gradual process of manumitting all slaves, a process that would last until 1827.

Historian Ron Chernow writes that, “[f]ew, if any, other founding fathers opposed slavery more consistently or toiled harder to eradicate it than Hamilton.” For example, while defending Jay’s Treaty, Hamilton wrote that the abandonment of freed slaves “to fall again under the yoke of their masters and into slavery is as odious and immoral a thing as can be conceived.” Click here for a link to Hamilton’s July 1795 pamphlet, which was critical of efforts to force the British to return runaway slaves.

Years earlier, while a student at King’s College, Hamilton wrote that slavery is “fatal to religion and morality; that it tends to debase the mind, and corrupt its noblest springs of action. I might shew, that it relaxes the sinews of industry, clips the wings of commerce, and introduces misery and indigence in every shape.” Click here for Hamilton’s 1774 pamphlet, A Full Vindication of the Measures of Congress. According to Chernow, during his life Hamilton “expressed an unwavering belief in the genetic equality of blacks and whites,” which stood in stark contrast with his slave owning colleagues.

Click below to purchase Chernow’s biography of Alexander Hamilton.

In his famous Cooper Union Address in 1860, Lincoln cited to Dr. Franklin, Alexander Hamilton, and Gouverneur Morris as among “the most noted anti-slavery men of those times.”

Hamilton was born on the island Nevis. He grew up as an orphan on the island of St Croix. Because slavery was endemic in the brutal sugar plantations in the Dutch West Indies, Hamilton had first hand knowledge of the horrors of slavery. Hamilton’s mother owned five slaves that she hired out to earn income for the family. It is likely that Hamilton’s childhood experiences informed his anti-slavery views.

The fact that many of Hamilton’s proposals were initially unsuccessful only serves to demonstrate the hard fought, uphill battle to eliminate the entrenched institution. Ultimately, slavery was finally eliminated from New York in 1827, due in part to the persistent efforts of Hamilton and his colleagues in the New York Manumission Society.

Under New York’s gradual emancipation program, slaves born prior to 1799 were finally emancipated by July 4, 1827. Under the Laws of 1799, Chapter 62, children born to a slave mother after July 4, 1799 were declared legally free, but not until the child turned 25 (for females) and 28 (for males). The decades long but peaceful process was the largest emancipation in North America before the Civil War. Click below for a link to the March 20, 1799 Act for the Gradual Elimination of Slavery. 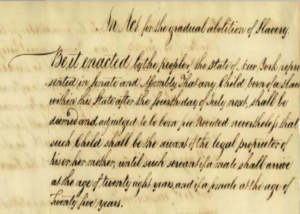 New York Manumission Society: The New York Manumission Society was founded in 1785 by thirty-one luminaries including John Jay and Alexander Hamilton. The society was modeled after the first antislavery society launched by the Quakers in Philadelphia in 1775. Invoking the Declaration of Independence, the Society’s minutes record the reasons for its creation as follows:

The benevolent Creator and Father of Men having given to them all an equal Right to Life, Liberty and Property, no Sovereign Power on Earth can justly deprive them of either…It is our Duty therefore, both as free Citizens and Christians, not only to regard with compassion the injustice down to those among us who are held as slaves but endeavor, by lawful ways and means, to enable them to share equally with us in that civil and religious Liberty with which an indulgent Providence has blessed these States; and to which these, our Brethren are by nature, as much entitled as ourselves.

Click here for the minutes of the Society at the New York Historical Society. 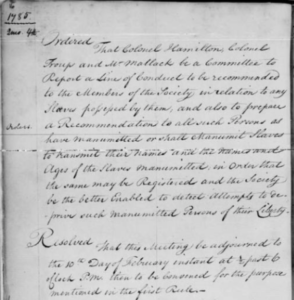 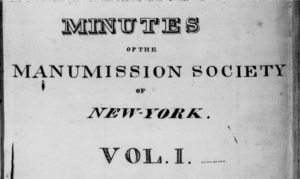 Following the Revolutionary War, slave owners came to New York City searching for runaway slaves who had escaped behind British lines. Click here for a discussion of the British occupation of Manhattan during the Revolutionary War, which lasted until “Evacuation Day” in November of 1783. One of the reasons for the founding of the Society was to safeguard former slaves who had already secured their freedom. Chernow describes that the members of the Society were “especially roiled by the rampant kidnapping of free blacks on the New York streets, who were then sold into slavery.”

One of the first decisions facing the Society was how to address the contradiction that many of its members were themselves slaveowners. Hamilton and two other members were tasked as a ways-and-means committee with formulating a proposal. In November of 1785, Hamilton’s committee recommended a bold timetable for members to commit to freeing their slaves. Hamilton’s aggressive proposal was rejected in favor of a less ambitious plan whereby members would be free to emancipate slaves on their own schedule. Hamilton was undeterred.

Three months later, as a member of the Society’s standing committee, Hamilton lobbied the state legislature to halt the export of slaves from New York. Among other things, the committee issued to both the state legislature and the Continental Congress a pamphlet entitled, “A Dialogue on the Slavery of the Africans, etc.” Hamilton also helped draft a petition that urged the New York legislature to end slave trading in the state. Hamilton’s petition decried the plight of slaves who were exported “like cattle and other articles of commerce” and demanded the end of a practice “so repugnant to humanity and inconsistent with the liberality and justice which should distinguish a free and enlightened people.” The signers of the petition included John Jay, Robert Livingston, James Duane, and Hamilton’s friend, Hercules Mulligan.

In 1788, the New York Manumission Society successfully prevailed upon the New York Legislature to end the importation of slaves into New York. The 1788 law made it illegal to “purchase or buy” or “as a factor or agent to another [to] take or receive any slave with intent to remove, export, or carry such slave from this State…to be sold…” Click here for the Acts of the 11th Legislature, Chapter 40 at p. 676 (1788). It was believed, perhaps too optimistically, that abolishing the slave trade would lead to the abolishment of the institution of slavery. The minutes of the Society record the expectation that the import ban “has much the same Effect as a Prohibition, and will prevent the Increase of Slavery amongst us.”

Chernow describes the founding of the Manumission Society and similar antislavery societies in other states as a “hopeful moment in American race relations,” which preceded the Constitutional Convention of 1787 and its inherent compromises over slavery.

In 1799, the Society’s lobbying convinced the Legislature to gradually abolish slavery in New York state. The imperfect Act of 1799 provided that children of slaves born after July 4, 1799 would be legally free, but would be required to serve as indentured servants until age 28 for males and age 25 for females. Slaves born prior to 1799 were treated as indentured servants for life. In 1817, New York finally freed all slaves born before July 4, 1799. The 1817 law would become fully effective ten years later in 1827. Thus, the Revised Statutes of the State of New York (1829) was the first codification to fully extirpate the odious institution from New York law, in Section 16, of Title VII, which is copied below:

Click here for a discussion of the codification of the Revised Statutes of New York in 1829.

In addition to its public campaign against slavery, the Manumission Society was also a philanthropic organization. In 1787 the Society established the African Free School, which was open to the children of both free and enslaved New Yorkers. The Society also resisted the kidnapping of freed slaves and organized boycotts against those involved in the slave trade. 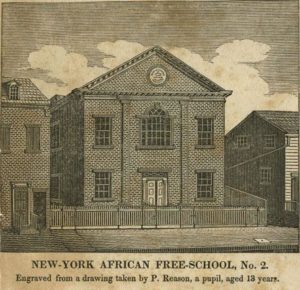 When Hamilton returned to New York in 1798 he resumed his work with the Society. He was elected one of its four legal advisors and helped defend free African Americans when out-of-state slave owners or bounty hunters tried to reclaim them with bills of sale and other legal documentation.

As depicted in Lin-Manuel Miranda’s musical, Hamilton supported his friend John Laurens’ proposal to raise four battalions of southern slaves who would be emancipated after the war.  The following lyrics are sung by John Laurens in the song, My Shot:

But we’ll never be truly free
Until those in bondage have the same rights as you and me
You and I. Do or die. Wait till I sally in
On a stallion with the first black battalion…

Slavery and Freedom in New York (Longreads.com), an excerpt from Gateway to Freedom, Eric Foner

For Sale on eBay

The Laws of the Fourtieth Session of the New York Legislature, which includes the 1817 law gradually emancipating slaves (An Act Relating to Slaves and Servants) can be purchased on ebay from Americana Books for $113 using the following Ebay link: 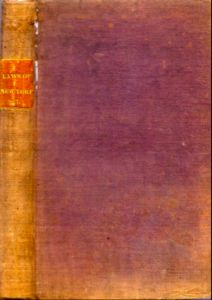 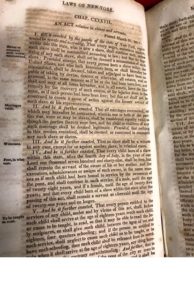 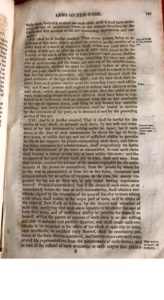