Background: Newly inaugurated President George Washington called for a national day of thanksgiving on November 26, 1789 to celebrate the end of the Revolutionary War and the ratification of the U.S. Constitution.

President John Adams issued a similar proclamation, but President Thomas Jefferson declined to continue the practice. For Jefferson, the wall of separation of church and state precluded religious declarations of thanksgiving. From 1815 until 1863, official thanksgiving proclamations were not issued until Lincoln re-instituted the practice. Three months after the Union victories at Gettysburg and Vicksburg, Lincoln was optimistic that the Civil War had reached a turning point.

Lincoln’s declaration: Exactly 74 years after President Washington proclaimed a day of national thanksgiving, on October 3, 1863 Lincoln officially declared the last Thursday of November “as a day of Thanksgiving and Praise.” Click here for a link to the text of Lincoln’s Proclamation which is also copied below.

In the Thanksgiving Proclamation Lincoln recognized that the theatre of battle had been “greatly contracted by the advancing armies and navies of the Union.” Against this backdrop, Lincoln observed that, “[t]he year that is drawing towards its close, has been filled with the blessings of fruitful fields and healthful skies.” In concluding the Proclamation, Lincoln hoped to “heal the wounds of the nation and to restore it as soon as may be consistent with Divine purposes to the full enjoyment of peace, harmony, tranquility and union.”

A month before his death, in his Second Inaugural Address, Lincoln would repeat the theme of national reconciliation. The following immortal words are inscribed on the walls of the Lincoln Memorial:

With malice toward none; with charity for all; with firmness in the right, as God gives us to see the right, let us strive on to finish the work we are in; to bind up the nation’s wounds; to care for him who shall have borne the battle, and for his widow, and his orphan—to do all which may achieve and cherish a just, and a lasting peace, among ourselves, and with all nations.

Sarah Josepha Hale and the national Thanksgiving holiday:  Sarah Josepha Hale, a 74-year-old magazine editor, had written to Lincoln urging him to establish a “day of our annual Thanksgiving” which would be a “National and fixed Union Festival.” She explained, “You may have observed that, for some years past, there has been an increasing interest felt in our land to have the Thanksgiving held on the same day, in all the States; it now needs National recognition and authoritative fixation, only, to become permanently, an American custom and institution.”

Years earlier, Hale had recognized in an 1859 editorial the promise of a national Thanksgiving holiday to bind the country together. “Everything that contributes to bind us in one vast empire together, to quicken the sympathy that makes us feel from the icy North to the sunny South that we are one family, each a member of a great and free Nation, not merely the unit of a remote locality, is worthy of being cherished.” Lincoln, who understood the power of symbolism and the need to unite and heal the country, agreed and found it “fitting and proper” to act.

The fact that Lincoln was the President who made Thanksgiving a national holiday is thus not surprising. In his First Inaugural Address Lincoln had spoken about “the mystic chords of memory” and the “better angles of our nature.” With a little prodding by Sarah Hale, Lincoln came to recognize the capacity of symbols and shared traditions to bind the country together.

Pictured below is Thomas Nast’s engraving illustrating Thanksgiving scenes, published in Harper’s Weekly in December of 1863. It is also noteworthy that the Emancipation Proclamation was issued on January 1, 1863, as depicted at bottom of the engraving. 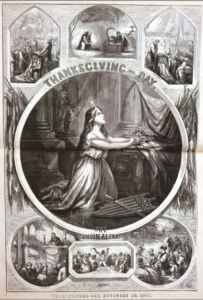 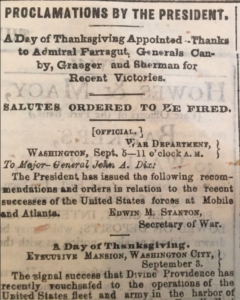 Although today we may not recognize Sarah Hale by name, her work speaks for itself. In 1830 she wrote the famous children’s poem “Mary Had a Little Lamb.” She was also a founder of American Ladies Magazine, which she used as a platform to promote women’s issues.

Prior to Lincoln’s 1863 Proclamation, each state scheduled its own Thanksgiving holiday at different times during the year. For example, earlier in his term Lincoln has ordered government departments closed for a local day of thanksgiving on November 28, 1861.

The concept of a national Thanksgiving did not originate with Sarah Hale, who re-popularized the idea. During the American Revolution, the Continental Congress issued proclamations in honor of military victories and declaring days of thanks. President Washington had also proclaimed a Thanksgiving in December 1777 to honor the defeat of the British at Saratoga. 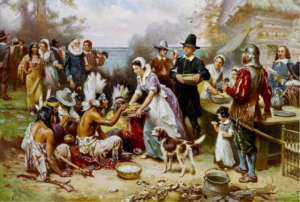 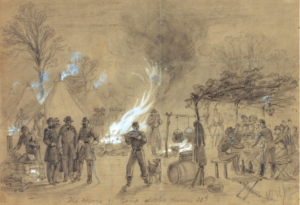 Pictured above is the “First Thanksgiving 1621” by Jean Leon Gerome Ferris, which depicts the idealized Thanksgiving scene which has evolved into a bedrock of American popular culture. Also pictured  is Alfred Waud’s sketch of a Union Thanksgiving camp on November 28, 1861.

The Lincoln’s Proclamation is copied below:

By the President of the United States of America.

The year that is drawing towards its close, has been filled with the blessings of fruitful fields and healthful skies. To these bounties, which are so constantly enjoyed that we are prone to forget the source from which they come, others have been added, which are of so extraordinary a nature, that they cannot fail to penetrate and soften even the heart which is habitually insensible to the ever watchful providence of Almighty God.

In the midst of a civil war of unequalled magnitude and severity, which has sometimes seemed to foreign States to invite and to provoke their aggression, peace has been preserved with all nations, order has been maintained, the laws have been respected and obeyed, and harmony has prevailed everywhere except in the theatre of military conflict; while that theatre has been greatly contracted by the advancing armies and navies of the Union.

Needful diversions of wealth and of strength from the fields of peaceful industry to the national defence, have not arrested the plough, the shuttle or the ship; the axe has enlarged the borders of our settlements, and the mines, as well of iron and coal as of the precious metals, have yielded even more abundantly than heretofore. Population has steadily increased, notwithstanding the waste that has been made in the camp, the siege and the battle-field; and the country, rejoicing in the consciousness of augmented strength and vigor, is permitted to expect continuance of years with large increase of freedom.

No human counsel hath devised nor hath any mortal hand worked out these great things. They are the gracious gifts of the Most High God, who, while dealing with us in anger for our sins, hath nevertheless remembered mercy.

It has seemed to me fit and proper that they should be solemnly, reverently and gratefully acknowledged as with one heart and one voice by the whole American People. I do therefore invite my fellow citizens in every part of the United States, and also those who are at sea and those who are sojourning in foreign lands, to set apart and observe the last Thursday of November next, as a day of Thanksgiving and Praise to our beneficent Father who dwelleth in the Heavens. And I recommend to them that while offering up the ascriptions justly due to Him for such singular deliverances and blessings, they do also, with humble penitence for our national perverseness and disobedience, commend to His tender care all those who have become widows, orphans, mourners or sufferers in the lamentable civil strife in which we are unavoidably engaged, and fervently implore the interposition of the Almighty Hand to heal the wounds of the nation and to restore it as soon as may be consistent with the Divine purposes to the full enjoyment of peace, harmony, tranquillity and Union.

In testimony whereof, I have hereunto set my hand and caused the Seal of the United States to be affixed.

Done at the City of Washington, this Third day of October, in the year of our Lord one thousand eight hundred and sixty-three, and of the Independence of the United States the Eighty-eighth.

By the President: Abraham Lincoln 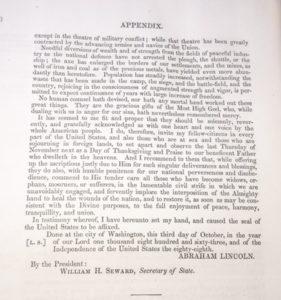 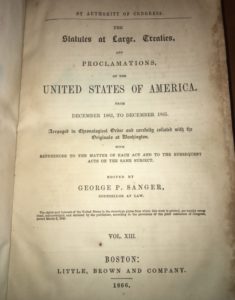 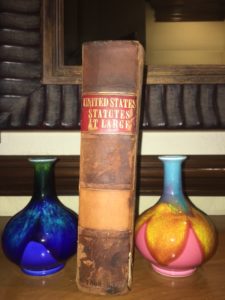