It can hardly be debated that one of the most shameful laws in American history was the Indian Removal Act of 1830. The Act authorized President Andrew Jackson to grant land west of the Mississippi in exchange for Native American land within existing state borders. The Act appropriated $500,000 for negotiating treaties and relocating the Southern tribes. 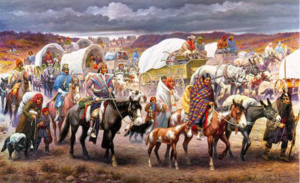 The Choctaws suffered the first forced removal beginning in the winter of 1831-1832. The Choctaws’ westward journey from Mississippi/Alabama was memorialized by Alexis de Tocqueville who witnessed the Trail of Tears in Memphis, Tennessee. “[T]he wounded, the sick, newborn babies, and the old men on the point of death…I saw them embark to cross the great river.” According to de Tocqueville, “the sight will never fade from my memory. Neither sob nor complaint rose from their silent assembly. Their afflictions were of long standing, and they felt them to be irremediable.”

The Creeks were forcibly removed from eastern Alabama and western Georgia beginning in 1836. The Chicksaw of northern Mississippi followed from  in 1837. The Cherokee and Seminoles held out the longest, but with only limited success. A witness in Kentucky to the Cherokee expulsion wrote that “Even aged females, apparently nearly ready to drop in the grave, were traveling with heavy burdens attached to their backs, sometimes on frozen ground and sometimes on muddy streets, with no covering for their fee.” It is estimated that nearly one-quarter of the relocated Native American Indians died during the journey.

The Seminole, led by Chief Osceola, decided that war was a better option. Osceola combined forces with fugitive African Americans who had escaped slavery. Using guerrilla tactics and the inhospitable Florida Everglades as a sanctuary, Osceola fought the American army to a standstill during the Second Seminole War from 1835 – 1842, when the federal government relented and allowed some Seminole to remain in Florida. Only a handful of the 110 U.S. soldiers under the command of Major Francis Drake survived the December 1835 ambush known as the “Dade Massacre.”

In all, nearly 100,000 expelled Native Americans were forced to trade roughly 100 million acres of land east of the Mississippi for 32 million acres west in Oklahoma, plus $68,000,000. The “Indian Territory” was formally created in Oklahoma by the Indian Intercourse Act of 1834.

On December 6, 1830, in his second Annual Message to Congress, President Jackson summarized his Indian removal policy as follows: 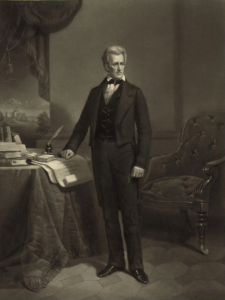 “It gives me pleasure to announce to Congress that the benevolent policy of the Government, steadily pursued for nearly thirty years, in relation to the removal of the Indians beyond the white settlements is approaching to a happy consummation. Two important tribes have accepted the provision made for their removal at the last session of Congress, and it is believed that their example will induce the remaining tribes also to seek the same obvious advantages.” While popular in the South, the Indian Removal Act was opposed by the Whig party and many north easterners. 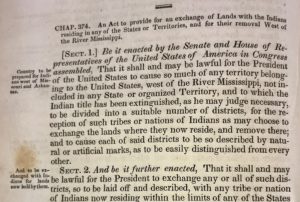 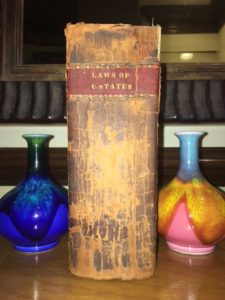 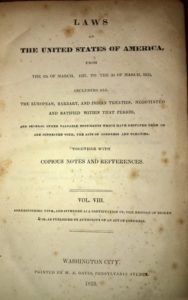 Further reading (primary sources from the Library of Congress)