As we celebrate the 50th anniversary of the moon landing on July 20, 1970, it is noteworthy that NASA is only celebrating its 60th anniversary. In other words, NASA put an astronaut on the moon only ten years after it was created.

NASA officially opened for business on October 1, 1958, but was not created from whole cloth. It was built on the foundation established by the National Advisory Committee for Aeronautics (NACA) which NASA succeeded. Prior to NASA’s creation, the responsibility for space exploration under NACA was primarily treated as a military program, in line with the Soviet model.

Beginning in 1946, NACA had been experimenting with rocket planes, including the supersonic Bell X-1. After the Russians launched the world’s first artificial satellite (Sputnik 1) on October 4, 1957, the United States accelerated its space program during the Sputnik crisis.

After NASA was created in 1958, it absorbed the 43-year-old NACA, along with its 8,000 employees, annual budget of $100 million, and three major research laboratories (the Langley and Ames Aeronautical Laboratories and the Lewis Flight Propulsion Laboratory).

NASA’s Project Mercury initiated America’s first human space program, with the objective of learning if humans could survive in space. Yet, on April 12, 1961, Russian cosmonaut Yuri Gagarin became the first person in space. Less than a month later, American astronaut Alan Shepard became the first American in space, making the first suborbital flight on May 5, 1961.

Before a joint session of Congress, on May 25, 1961, President Kennedy gave his historic moon shot speech declaring that we would put a man on the moon within a decade. Click here for a text of the Kennedy’s moon shot speech. In September of 1962, in a speech intended to persuade Americans to support the Apollo program, Kennedy characterized space as a new frontier. Kennedy explained that “We choose to go to the moon in this decade and do other things, not because they are easy, but because they are hard.”  Click here for a text of Kennedy’s Rice Stadium speech.

Kennedy was correct. Gus Grissom, the second American in space, died in January 1967 during a pre-launch test for Apollo 1. In February 1962, John Glenn became the first American to orbit the Earth.

Project Mercury was followed by Project Gemini, which laid the foundation for the Apollo moon program. The larger, two crew Gemini rockets improved the capabilities needed for a moon landing. Ten Gemini missions flew low Earth orbit missions in 1965 and 1966, placing the United States in the lead during the space race.

On July 20, 1969, Neil Armstrong and Buzz Aldrin reached the moon during the Apollo 11 mission. After the Eagle had landed, Commander Neil Armstrong took “one small step for man and one giant leap for mankind,” stepping out onto the moon on July 21. He was joined by Buzz Aldrin 19 minutes later. During their two hours on the moon they collected 47.5 pounds of moon rock. Michael Collins orbited the moon alone in the Columbia command module during the 21 hours and 31 minutes that Armstrong and Aldrin spent on the lunar surface at Tranquility Base. Altogether, the Apollo project successfully landed a total of six lunar missions through 1972. 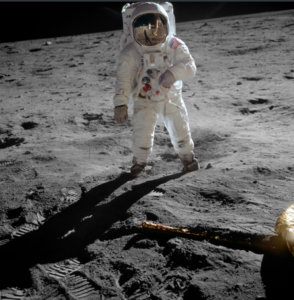 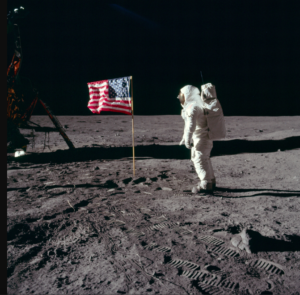 The message “We came in peace for all mankind” is inscribed on the plaque that Armstrong and Aldrin left on the Moon during the Apollo 11 mission. 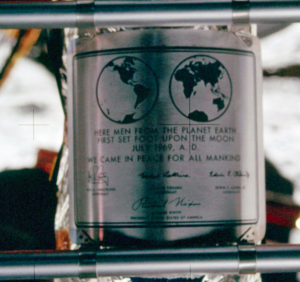 The phrase “We came in peace” is taken from the National Aeronautics and Space Administration Act’s declaration of NASA’s policy and purpose:

The Congress hereby declares that it is the policy of the United States that activities in space should be devoted to peaceful purposes for the benefit of all mankind.

The Act was subsequently amended and now reads:

Devotion of Space Activities to Peaceful Purposes for Benefit of All Humankind.–Congress declares that it is the policy of the United States that activities in space should be devoted to peaceful purposes for the benefit of all humankind.

The 1958 Act charged NASA with the mission of conducting the aeronautical and space activities of the United States “so as to contribute materially to one or more of the following objectives:”