Following the Civil War, the Thirteenth Amendment formally abolished slavery and involuntary servitude. Nevertheless, the practice of “debt slavery,” “debt servitude,” or “peonage” continued for many years, particularly in the South. The most glaring example was a loophole contained in the Thirteenth Amendment which contained an exception for “punishment for crime whereof the party shall have been duly convicted.”

In 1867, Congress passed the Anti-Peonage Act in an attempt to prohibit peonage and related practices, which were particularly widespread in the New Mexico territory, which had previously been a Spanish colony.

AN ACT To abolish and forever prohibit the System of Peonage in the Territory of New Mexico and other Parts of the United States.

Be it enacted by the Senate and House of Representatives of the United States of America in Congress assembled, That the holding of any person to service or labor under the system known as peonage is hereby declared to be unlawful, and the same is hereby abolished and forever prohibited in the Territory of New Mexico, or in any other Territory or State of the United States; and all acts, laws, resolutions, orders, regulations, or usages of the Territory of New Mexico, or of any other Territory or State of the United States, which have heretofore established, maintained, or enforced, or by virtue of which any attempt shall hereafter be made to establish, maintain, or enforce, directly or indirectly, the voluntary or involuntary service or labor of any persons as peons, in liquidation of any debt or obligation, or otherwise, be, and the same are hereby, declared null and void; and any person or persons who shall hold, arrest, or return, or cause to be held, arrested, or returned, or in any manner aid in the arrest or return of any person or persons to a condition of peonage, shall, upon conviction, be punished by fine not less than one thousand nor more than five thousand dollars, or by imprisonment not less than one nor more than five years, or both, at the discretion of the court.

Sec. 2. And be it further enacted, That it shall be the duty of all persons in the military or civil service in the Territory of New Mexico to aid in the enforcement of the foregoing section of this act; and any person or persons who shall obstruct or attempt to obstruct, or in any way interfere with, or prevent the enforcement of this act, shall be liable to the pains and penalties hereby provided; and any officer or other person in the military service of the United States who shall so offend, directly or indirectly, shall, on conviction before a court-martial, be dishonorably dismissed the service of the United States, and shall thereafter be ineligible to reappointment to any office of trust, honor, or profit under the government. 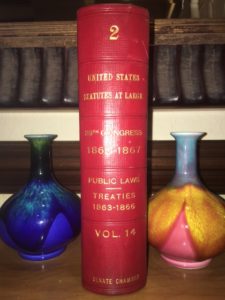 Background: Peonage occurs when an employer compels an “employee” against their will to pay off a debt with work. The Peonage Act of 1867 attempted to outlaw peonage based on Congress’ enforcement powers under the Thirteenth Amendment.  Nevertheless, after Reconstruction, many former slaves were effectively re-enslaved by a corrupt system of peonage in the Jim Crow South until the practice was finally outlawed. The institution of peonage overlapped with segregation, the convict lease system and sharecropping. Historians believe that in Alabama, Mississippi, and Georgia, as many as one-third of all sharecropping farmers were being held against their will in 1900. The practice was also commonly used in the mining, railroad and lumber industries.

Notwithstanding the 1867 Anti-Peonage Act, Southern states found ways to retain peonage restrictions without incurring technical violations of federal law, including “criminal surety statutes” that allowed employers to pay court fines for indigent “employees” charged with minor offenses in exchange for a commitment to pay off the debt. The practice provided tax revenue for local government  – and a lucrative source of income for corrupt officials. Examples of workers’ “debt records” being subsequently “lost” were not isolated. Even after debts were paid off, workers would become further indebted to their “employer” when surety contracts were systematically extended for unspecified “breaches” by unwitting workers. 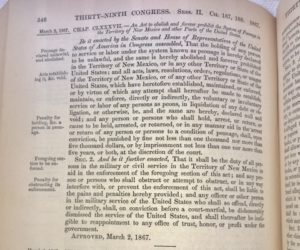 In the Slaughterhouse Cases (1873), the Supreme Court recognized that the definition of involuntary servitude comprehended “something more than slavery in the strict sense of the term” and necessarily included “serfage, vassalage, villenage, peonage, and all other forms of compulsory service for the mere benefit or pleasure of others.“ As a result, the Court held that the 13th Amendment applied to “Mexican peonage and the Chinese coolie labor system.” Yet, the Slaughterhouse Cases interpreted the “privileges and immunities” clause of the newly adopted 14th Amendment to only narrowly protect “federal citizenship” of the United States, not the privileges and immunities of “state citizenship.”

In the early years of the twentieth century, the Progressive Era Justice Department finally began prosecuting peonage cases. The constitutionality of the Act was tested before the Supreme Court in the case of Clyatt v. U.S. (1905). The case involved the forcible return of workers from Florida to Georgia.  At the time, a Florida statute permitted imprisonment of workers who breached their employment contracts while still owing money to their employers.

The Clyatt court defined peonage as “a status or condition of compulsory service, based upon the indebtedness of the peon to the master.”  Yet, the Clyatt decision narrowly interpreted the law as only applying to the act of “holding, arresting, returning” another in a state of peonage. Because the testimony did not prove that the defendants had unlawfully held, arrested or returned the subjects to a “prior” condition of peonage, the Court ruled that a new trial was required.

Justice Harlan dissented. Notwithstanding the technical reading by his colleagues, Harlan reasoned that there was sufficient evidence that the subjects were taken against their will, by force, “to work out a debt.” Harlan concluded his dissent by pointing out that the case disclosed “barbarities of the worst kind.” Because the witnesses could not be located, the case was never retried and was eventually dismissed. As alluded to by Pete Daniel in The Shadow of Slavery: Peonage in the South, 1901 – 1969 (Pete Daniel, 1972), poet Langston Hughes may have had the Clyatt case in mind when he wrote:

That Justice is a blind goddess

Is a thing to which we poor are wise:

That once, perhaps, were eyes

Subsequently, in Bailey v. Alabama (1911) the Supreme Court invalidated laws criminalizing simple contractual breaches, which Southern states had used to circumvent the Peonage Act. According to Justice Hughes, although the statute purported to punish fraud, its “natural and inevitable effect is to expose to conviction for crime those who simply fail or refuse to perform contracts for personal service in liquidation of a debt.” As described by Justice Hughes’ majority decision:

Peonage is a term descriptive of a condition which has existed in Spanish America, and especially in Mexico. The essence of the thing is compulsory service in payment of a debt. A peon is one who is compelled to work for his creditor until his debt is paid. And in this explicit and comprehensive enactment, Congress was not concerned with mere names or manner of description, or with a particular place or section of the country. It was concerned with a fact, wherever it might exist; with a condition, however named and wherever it might be established, maintained, or enforced.

Although the debtor had contracted to perform labor, the 13th Amendment and the Anti-Peonage Act prohibited involuntary servitude and peonage. The Court refused to permit this constitutional protection to be defeated “through the guise of contracts under which advances had been made.”

In United States v. Reynolds (1914), the Supreme Court held that an Alabama criminal surety statute violated the Thirteenth Amendment. Under the Alabama surety statute, fines assessed for criminal convictions could be paid by a third party (surety). After criminal fines were paid by the surety, the convict was obligated to work for a period of time determined by the court. An indigent worker’s failure to complete the contract was itself a new criminal act that could perpetuate the cycle of forced labor.

While these decisions extended the protections of the Peonage Act, the decisions by themselves ultimately had little impact in the South. Peonage persisted in one form or another until after World War II.  For example, employers advanced worker pay or initial transportation costs until the loan was was “paid off.” When employers controlled company towns and company stores, it could be difficult for indebted workers to purchase their freedom or repay sharecropping loans.

Arguably the most corrupt and abusive examples of peonage occurred in concert with Jim Crow laws and state sanctioned peonage. “In the south, many black men were picked up for minor crimes or on trumped-up charges, and, when faced with staggering fines and court fees, forced to work for a local employer who would pay their fines for them. Southern states also leased their convicts en mass to local industrialists. The paperwork and debt record of individual prisoners was often lost, and these men found themselves trapped” in an “ever-turning wheel of servitude.” Click here for the PBS documentary Slavery by Another Name.

Click here for a discussion in the New York Times of the growing awareness of how peonage was used to enslave native American populations in the South West.

The Wheel of Servitude: Black Forced Labor After Slavery (Daniel A. Novack, 1978) 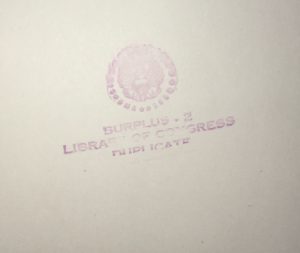 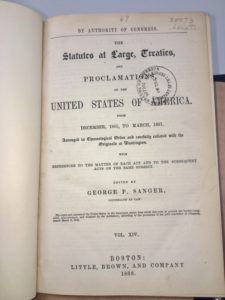