Laws of the United States, Chapter LXXI, Second Session of the 10th Congress, 1, 7, 1809. Published by Authority, Washington City, for the Department of State.

In 1808-1809, Congress passed several acts extending pension benefits to all soldiers who had been disabled during or following the Revolution War. Based on the success of Hamilton’s funding mechanism, Congress was able to assume not only state Revolutionary War Debts, but also state pension obligations.

Upon application to the Secretary of War the pension obligation was “transferred from the books of the state in which it was originally ‘in-registered’ to a register, to be opened for that purpose at the War Office of the United States.”

As illustrated by the pictures, the two hundred year old pamphlet has been rebound with maroon textured cloth, gilt fillets and titles on the spine. The original binding would have been blue-gray paper “wrappers,” “stab-stiched” together, as was customary at the time. The paper edges are “untrimmed.”

After the Constitution was written in Philadelphia during the summer of 1787, the new Congress met in 1789 to replace the ineffectual Confederation Congress. Under the leadership of President Washington, Secretary of Treasury Alexander Hamilton, Secretary of War Henry Knox and the “first man of the House,” James Madison, the unpaid pension obligations were assumed by the new federal government, which for the first time would have the resources to make good on the nation’s promises to its veterans. 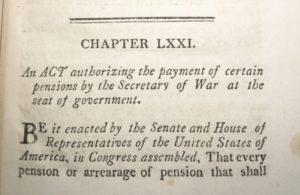 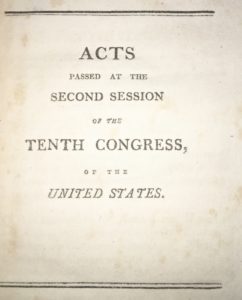 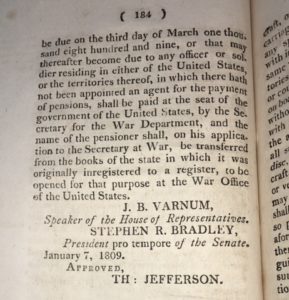 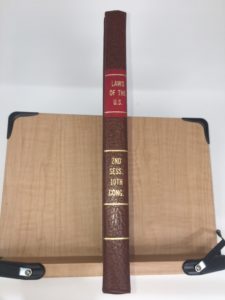