THE FIRST AMERICAN LAW BOOK: A System of the Laws of the State of Connecticut by Zephaniah Swift, published in two volumes from 1795-1796. 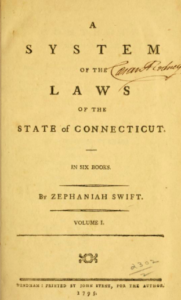 The first legal treatise published in America. The book is a comprehensive analysis of the powers and limits of government, legal rights, the nature of property, torts, crimes, and the principles of equity. The book presents Swift’s observations on government and differences between English and American common law.

In colonial times, law books were sold by subscription. Only after enough purchasers had subscribed would the book be printed.

The prestigious “subscriber list” includes President Washington, Vice President Adams, the Cabinet and half of the U.S. Supreme Court, along with James Madison, John Monroe, Aaron Burr, and other founding fathers (Edmund Randolph – First Attorney General and presenter of the Virginia Plan at the Constitutional Convention; Robert Morris – “Financier of the Revolution”; Oliver Ellsworth – future Chief Justice and presenter of the Connecticut Plan; Charles Lee – Third Attorney General) and signers of the Declaration of Independence.

One of the greatest American jurists, Zephaniah Swift studied at Yale. He was a member of the General Assembly of Connecticut from 1787 to 1793, rising to the position of Speaker in 1792. He was elected to the Third and Fourth U.S. Congress as a Federalist, where he served from 1787 to 1793. From 1801 to 1823 he served as a Justice on the Connecticut Supreme Court and as Chief Justice from 1806 – 1822. 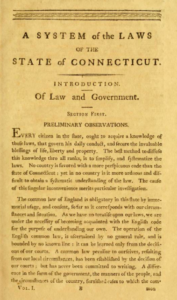 Swift’s influence extended well beyond Connecticut with subscribers in all 16 states – the 13 original colonies plus Vermont, Kentucky and Tennessee (which became the 16th state in 1796).

Swift was selected by his Congressional colleagues, who were no doubt impressed with his treatise, to compile the first official set of U.S. statutes in 1797. Although commonly cited as “Folwell’s Statutes” based on the name of the publisher (Richard Folwell), the collection of U.S. Statutes was organized and edited by Swift.

His other works included the Digest of the Laws of the state of Connecticut, modeled after Blackstone’s Commentaries, and A Digest of the Law of Evidence, the first American treatise on the subject of evidence. 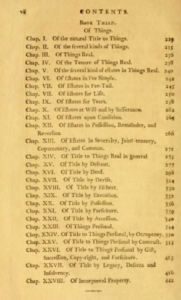 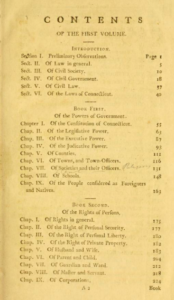 Click on the link below to purchase a softcover copy on Amazon:

Click on the links below to review John Adams’ copy, held at the Boston Public Library: 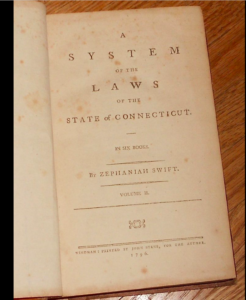 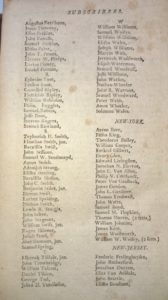 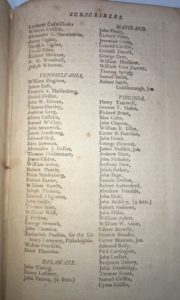 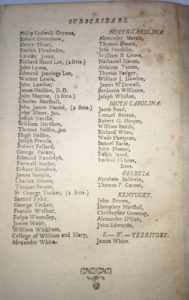 You can purchase a rare copy of A System of the Laws of the State of Connecticut by Zephaniah Swift, published in two volumes from 1795-1796.  The books are offered for sale for $950 on at AbeBooks.com.

Click on the following link to view or purchase the this rare copy. 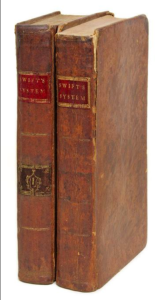 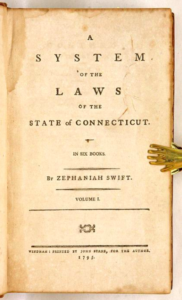 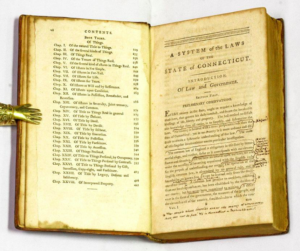