The state of Virginia played a central role in the creation of the United States Constitution. In fact, it can be argued that Virginia was the most supportive, pro-reform state when the Constitutional Convention began its deliberations in May of 1787. This supplemental post continues the discussion of the compensation paid to Virginia’s delegates to the Constitutional Convention. In addition to sharing dozens of images, this supplemental post discusses insights – and as yet unanswered questions – that arise from the primary sources collected below.

At the outset, it is important to recognize that this work would not have been possible without the invaluable assistance of Kevin D. Shupe, Reference Archivist at the Library of Virginia, and Ben Steck, Digital Collections Specialist. Thanks to their efforts StatutesandStories.com is pleased to provide online access to the these records.

It is hoped that these materials will be of assistance to future researchers and scholars who may be able to dive deeper into these archival records to answer remaining questions posed below. In addition to the images provided by Kevin and Ben, other images were copied from microfilm obtained by interlibrary loan from the Library of Virginia (“Auditor of Public Accounts, Receipts and Disbursement Journals,” Reels 6257-6259). The availability of interlibrary loans (in this case delicate microfilm) during a pandemic is much appreciated, which justifies a special thanks to Amy Miller, the Interlibrary Loan Manager for Broward County’s Main Library.

As described in the preceding post about Virginia Delegate Compensation (Part I), Virginia helped blaze a path by calling on the states to send delegates to Philadelphia. Virginia’s “Act for appointing Deputies” to Philadelphia provided a template for other states to follow. Moreover, the reputation of the Virginia delegation, including George Washington, signaled to the nation that the Convention should be taken seriously. In turn, Virginia compensated its delegates commensurate with their station.

Part I further suggests that the compensation package offered by Virginia encouraged its delegates to remain in Philadelphia. For example, Governor Randolph and George Mason are rare examples of holdout delegates, who remained in Philadelphia despite their misgivings. Randolph and Mason contrast with Robert Yates and John Lansing (of New York), Luther Martin and John Francis Mercer (of Maryland), and other “proto-Anti-Federalists” who simply left town when they disagreed with the direction that the Convention was taking. Delegate compensation paid by the other twelve states is discussed here.

Pictured below is a request by James Madison for an advance of $550 for one quarter of his annual Congressional salary. Because Governor Randolph was attending the Convention, he was able to personally sign the expedited request in Philadelphia on 2 August 1787, writing that “[t]his bill will certainly be paid on sight.” The $550 corresponds to approximately 90 days of pay to Madison, at the rate of $6 per day. 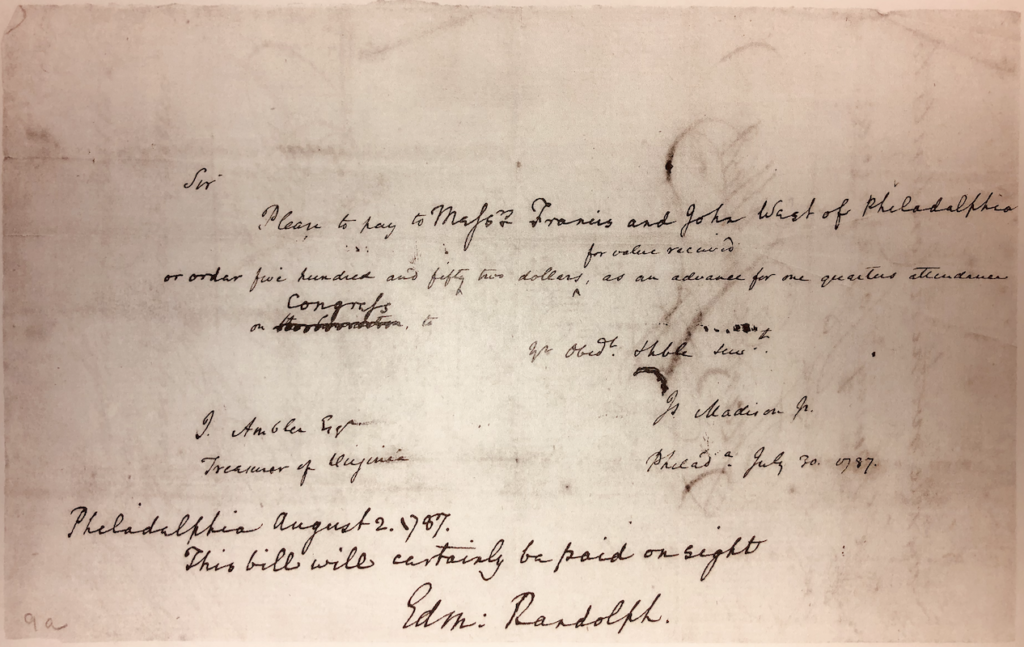 A future blog post will explore the implications of a curious “revision” to this document. It appears that it was important for Madison and/or Randolph to distinguish between Madison’s work as a delegate to Congress versus his work as a member of the Federal Convention.

The journals and ledgers pictured below are particularly useful when viewed in their totality and contrasted with similar financial records from other states. The difficulty of gaining access to this material in twelve separate state archives may help explain why the observations/questions below may have been overlooked by prior generations of historians. StatutesandStories invites other researchers and scholars to follow this research trail.

Pictured below is the £100 per delegate advance that was paid to all of Virginia’s delegates in April/May, but not paid to Madison. Mason was the first to receive an initial advance of £60 on April 7. Wythe and Blair received a full advance of £100 on April 17. Mason was paid the balance of £40 on May 2. 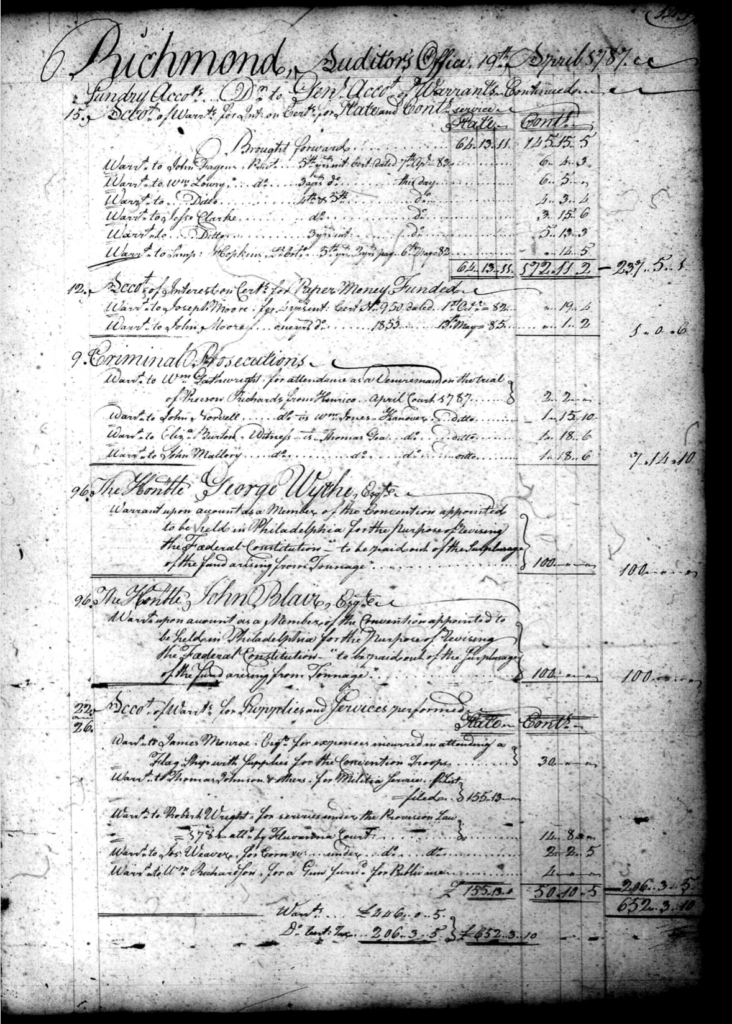 The remaining Virginia delegates were paid £100 in May, except for Madison. Mason received a second installment of £ 40 on or about May 2, resulting in a full advance to Mason of £ 100. 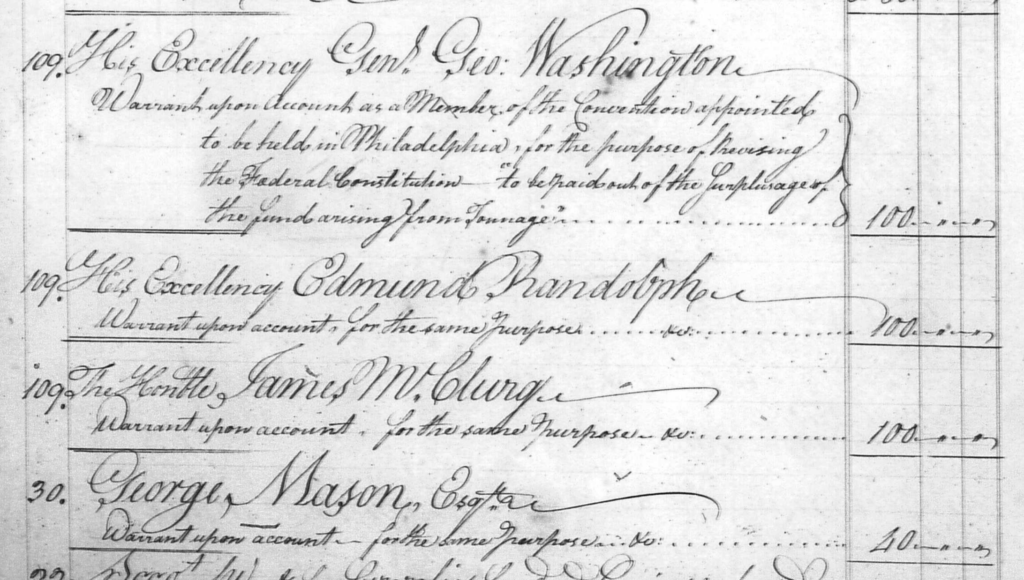 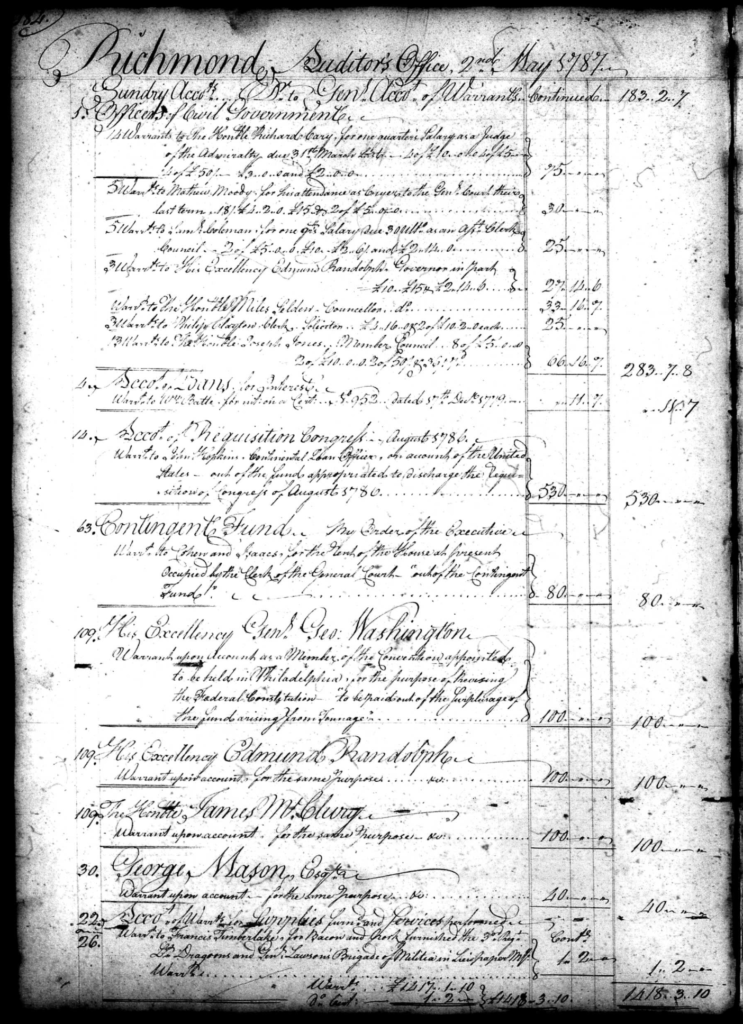 Pictured below is a second round of £100 advances that were paid in August of 1787. At the time, it was clear that the Convention’s work would continue into September. Unlike the other Virginia delegates, Madison didn’t receive an initial £100 advance. Instead, he was paid £165 and 12 shillings “[f]or attendance as a Delegate in Congress from 20th of April to the 20th of July.” 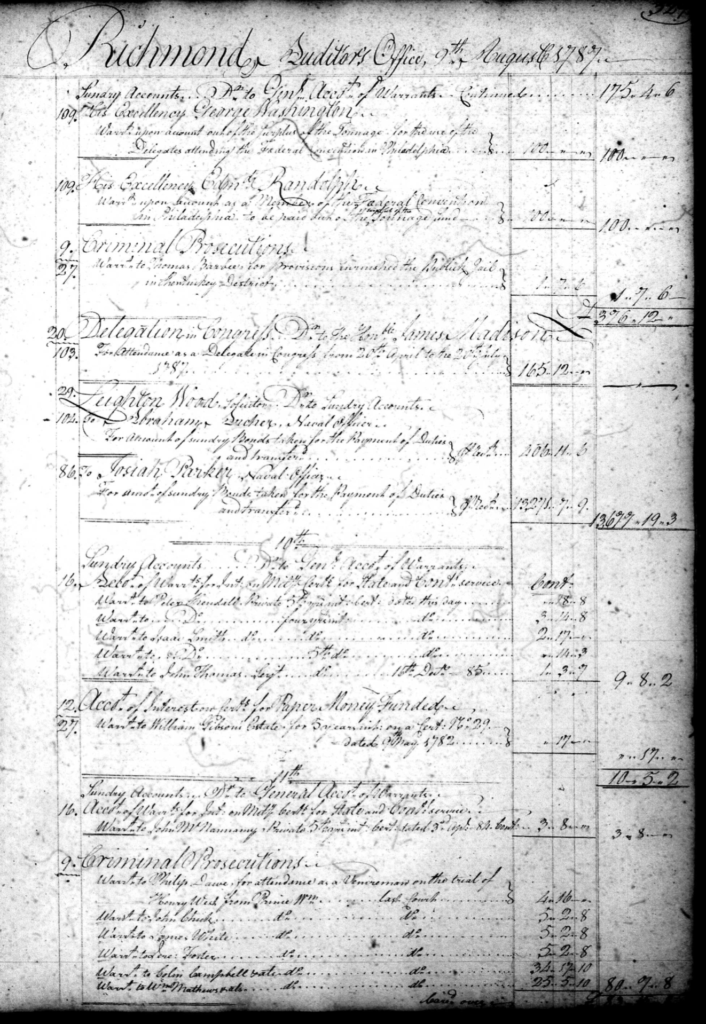 The prospect of a very long sojournment here has determined me to bring up my family. They will want about thirty pounds for the expense of travelling. The Executive will therefore oblige me by directing a warrant in my favor, to be delivered to Mrs. R. for that amount.

Twenty-three or four days more will overrun this sum, and will have elapsed before my family can arrive, so that I trust there will be no difficulty with the advance.

The first ledger pictured below reflects payments of £230 to Governor Randolph for service as a “Member of the Federal Convention.” The second, updated ledger, reflects a final payment of £50 on October 9, increasing his total Convention pay to £280.

Copied below are journal entries reflecting quarterly installments of Governor Randolph’s £800 per year salary. Interestingly, he was paid over £400 pounds in November and December, suggesting that he did not find it necessary to draw his salary earlier in the year. Presumably, Governor Randolph didn’t need the funds since he was also receiving the $6 per day delegate pay, which totaled £280 when converted to pounds. Thus, for the year, Randolph was paid approximately £1,080 (£800 salary and £280 delegate pay). 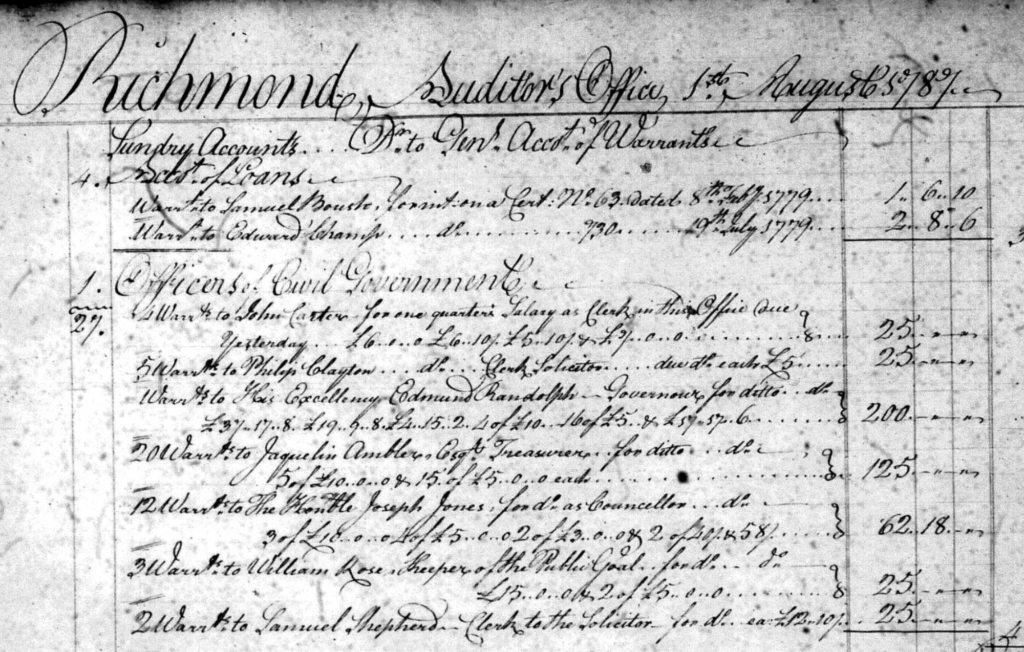 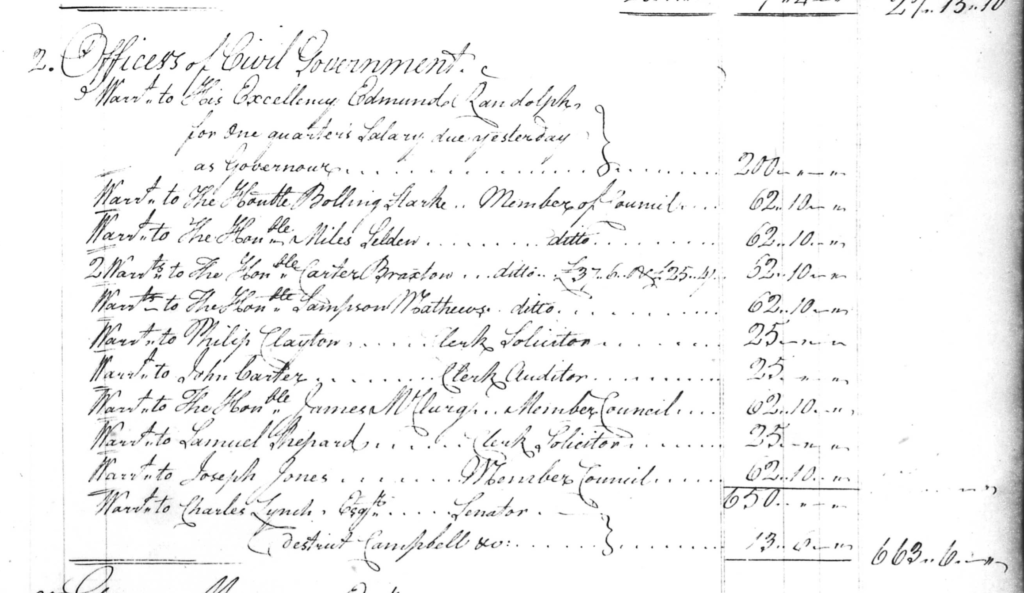 Dr. James McClurg, a medical doctor, was a member of the Governor’s Privy Council. Members of the Privy Council were not paid a salary. Instead, they were paid a per diem for each day that they attended Council meetings, which was similar to the method of compensating members of Congress.

This post continues with a supplemental discussion of the compensation paid to James Madison (Pending). Was James Madison, the hardest working delegate in Philadelphia, underpaid during the summer of 1787?

The Constitutional Convention of 1787: A Comprehensive Encyclopedia of America’s Founding, John Vile (2005)