A prior post discussed the important federal district court decision in Trump v. Wisconsin Elections Commission by Judge Ludwig. The following post is intended to provide a quick update that the Seventh Circuit Court of Appeals unanimously affirmed Judge Ludwig’s decision on the merits. Click here for a link to the 7th Circuit’s decision, released on Christmas Eve, which is discussed below. 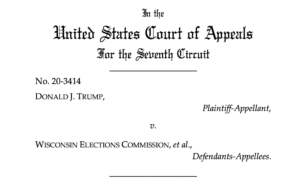 Normally it is irrelevant who appointed a particular judge. Nonetheless, in 2020 it is not inappropriate to point out that today’s 7th Circuit decision was reached by a three judge panel who were all appointed by Republican presidents. The opinion was written by Senior Circuit Judge Flaum, a Reagan appointee, joined by Judge Rovner (a George H. W. Bush appointee) and Judge Scudder (a Trump appointee). While it is also irrelevant, some would note that the 7th Circuit is the former home of recently appointed Supreme Court Justice Amy Coney Barrett. 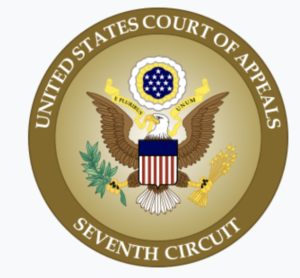 According to the 7th Circuit:

We agree that Wisconsin lawfully appointed its electors in the manner directed by its Legislature and add that the President’s claim also fails because of the unreasonable delay that accompanied the challenges the President now wishes to advance against Wisconsin’s election procedures.

As discussed in the prior post, President Trump’s lawyers argued that the procedures adopted by the Wisconsin Elections Commission were not authorized by the Wisconsin Legislature and were a violation of the U.S. Constitution’s Electors Clause.

To implement the obligation imposed by the Electors Clause, Wisconsin’s Legislature has directed that the State’s electors be appointed “[b]y general ballot at the general election for choosing the president and vice president of the United States.” WIS. STAT. § 8.25(1). It has further assigned “responsibility for the administration of … laws relating to elections and election campaigns” to the Commission. Id. § 5.05(1). . . .

The President alleges that the Commission and municipal officials so misused the power granted to them by the Legislature that they had unconstitutionally altered the “Manner” by which Wisconsin appointed its electors. His allegations challenge three pieces of guidance issued by the Commission well in advance of the 2020 election.

The 7th Circuit noted that after an evidentiary hearing, the district court below rejected the President’s arguments on the merits.

Even if the Electors Clause was read more broadly to address the “Manner” in which Wisconsin conducted the election, the district court determined that the Legislature had authorized the Commission to issue the guidance now challenged by the President. None of that guidance, the district court reasoned, reflected such a deviation from the Wisconsin Legislature’s directives as to violate the Electors Clause.

Agreeing with the district court, the 7th Circuit held that the doctrine of laches applied based on the late filing of the case which should have been brought prior to the election:

The President had a full opportunity before the election to press the very challenges to Wisconsin law underlying his present claims. Having foregone that opportunity, he cannot now—after the election results have been certified as final— seek to bring those challenges. All of this is especially so given that the Commission announced well in advance of the election the guidance he now challenges. Indeed, the witness address guidance came four years ago, before the 2016 election. The Commission issued its guidance on indefinitely confined voters in March 2020 and endorsed the use of drop boxes in August.

Allowing the President to raise his arguments, at this late date, after Wisconsin has tallied the votes and certified the election outcome, would impose unquestionable harm on the defendants, and the State’s voters, many of whom cast ballots in reliance on the guidance, procedures, and practices that the President challenges here. The President’s delay alone is enough to warrant affirming the district court’s judgment.

Addressing the merits, the Court rejected the President’s argument that the Wisconsin election procedures violated the U.S. Constitution’s Electors Clause:

Defining the precise contours of the Electors Clause is a difficult endeavor. The text seems to point to at least two constructions, and the case law interpreting or applying the Clause is sparse. This case does not require us to answer the question, as the Commission’s guidance did not amount to a violation under the two most likely interpretations. . . . .

The Wisconsin Legislature expressly assigned to the Commission “the responsibility for the administration of … laws relating to elections,” WIS. STAT. § 5.05(1), just as Florida’s Legislature had delegated a similar responsibility to its Secretary of State. See Bush, 531 U.S. at 116 (Rehnquist, C.J., concurring). Florida’s legislative scheme included this “statutorily provided apportionment of responsibility,” and three Justices found a departure from that scheme when the Florida Supreme Court rejected the Secretary’s interpretation of state law. And it was the Minnesota Secretary of State’s lack of a similar responsibility that prompted two judges of the Eighth Circuit to conclude that he likely violated the Electors Clause by adding a week to the deadline for receipt of absentee ballots. By contrast, whatever actions the Commission took here, it took under color of authority expressly granted to it by the Legislature. And that authority is not diminished by allegations that the Commission erred in its exercise. (internal citations omitted)

Summarizing its conclusions, the Court indicated that it is not the job of federal courts to rewrite state election law:

We are not the ultimate authority on Wisconsin law. That responsibility rests with the State’s Supreme Court. Put another way, the errors that the President alleges occurred in the Commission’s exercise of its authority are in the main matters of state law. They belong, then, in the state courts, where the President had an opportunity to raise his concerns. Indeed, the Wisconsin Supreme Court rejected his claims regarding the guidance on indefinitely confined voters, see Trump v. Biden, 2020 WI 91 ¶ 8 (Dec. 14, 2020), and declined to reach the rest of his arguments on grounds of laches.

For our part, all we need to say is that, even on a broad reading of the Electors Clause, Wisconsin lawfully appointed its electors in the manner directed by its Legislature.