GOODBYE TO A HISTORY MAKING YEAR

The purpose of this post is to provide a quick holiday message to our readership and best wishes to the extended StatutesandStories.com family. This post will also summarize the growing content on StatutesandStories, which now exceeds 200 blog posts organized in the INDEX. 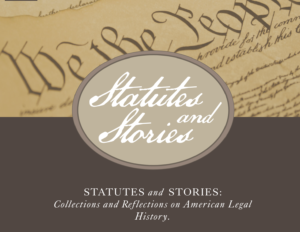 When middle school students studying American history read about the Stamp Act, Tea Act, Boston Harbour Act and the Quartering Act (which precipitated the American Revolution), they can now view the acts themselves.

For example, is hoped that students studying civics can now gain a deeper understanding of the Constitution by reading about the Constitution’s forgotten “Cover Letter” signed by Washington on September 17, 1787. Students of history can also engage with debates over the ratification of the Constitution, the adoption of the Bill of Rights, and the seminal work of the First Congress in 1789.

The StatutesandStories.com website witnessed exciting growth in 2020 in no small part due to a renewed interest in foundational principles underlying American democracy. It is also suspected that quarantines and social distancing in 2020 provided opportunities for students of history to question assumptions and re-examine primary sources.

As new posts are added, the content is made available in the both the BLOG and the INDEX on StatutesandStories. The INDEX is organized chronologically, listing important laws by date of adoption. Or, readers can scan the INDEX by topic as follows:

In 2020, the following posts were particularly popular:

THE AMERICAN MUSEUM (Mathew Carey’s literary magazine that chronicled the adoption of the Constitution, the Bill of Rights, and the First Congress)

JOHN LEWIS AND THE VOTING RIGHTS ACT OF 1965