Presidential succession and the workings of the Electoral College are foundational concepts that underlie the American System of constitutional government. Yet, the first Congressional legislation addressing these topics is easily overlooked and not widely understood.

The Presidential Succession Act of 1792 (hereinafter the 1792 “Act”) was adopted by the Second Congress. The Act was necessitated by the upcoming presidential election, which would unanimously re-elect George Washington. Click here for a link to the Act (contained in the three volume Laws of the United States published in 1796).

This post is divided into two parts to discuss both components of the Act. Part I of this post discusses the Electoral College procedures left by the framers of the Constitution to be fleshed out by Congress. Part II (pending) discusses the related issue of Presidential Succession.

The Act’s legislative history will also be reviewed, including the fact that James Madison and the House of Representatives disagreed with the Federalists in the Senate over the order of succession contained in the 1792 Act. It is likely that Federalist fears over placing Jefferson too close to the reins of power may have been at play when Congress selected the President Pro Tempore of the Senate and Speaker of the House to fill presidential vacancies, rather than cabinet officers. Subsequent amendments will also be discussed, along with modern proposals to replace the Electoral College.

Background about the Electoral College:

a Number of Electors, equal to the whole Number of Senators and Representatives to which the State may be entitled in the Congress: but no Senator or Representative, or Person holding an Office of Trust or Profit under the United States, shall be appointed an Elector.

The phrase electoral “college” was first codified in the law in 1845. Click here for a link to the Presidential Election Day Act of 1845. The phrase Electoral College was likely borrowed from the Catholic Church’s College of Cardinals, who elect the Pope.

Members of the Electoral College are selected by the respective states, “in such Manner as the Legislature thereof may direct…” Originally, the majority of states did not use the popular vote in presidential elections. Rather, state legislatures commonly voted for President on behalf of the state. By 1832, popular elections replaced state legislatures voting for President.

While Article II, Section I, outlines the process of Presidential elections, it did not answer all procedural questions for the Electoral College. Thus, the 1792 Act fills the gaps that the Constitution left open for Congress to resolve.

Electoral College provisions of the 1792 Act

The First Congress debated the subject of Presidential Succession in 1791, but was unable to approve a bill (as discussed in Part II). With the election of 1792 scheduled for later in the year, the Second Congress resumed work on the matter in early 1792.

The 1792 Act addressed the details left open by the Constitution, including the appointment process for electors, the timing of the meeting of the Electoral College, the governors’ role in national elections, and the surprisingly controversial matter of  Presidential Succession.

The 1792 Act established the following procedures for the Electoral College: 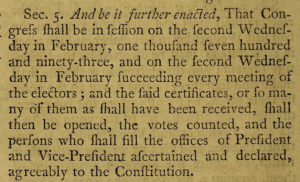 According to the Constitution, each elector would cast two votes for President. The candidate receiving the largest number of votes was elected President, while the recipient of the second highest number of votes was elected Vice President. This procedure did not contemplate the emergence of political parties and was primarily focused on elevating the most qualified candidates to national office.

This process would be revised a decade later by the Twelfth Amendment (which recognizes the reality of party politics and provides for electors to cast separate votes for President and Vice President). Click here for a discussion of the Twelfth Amendment and the Election of 1800 which initially resulted in a tie between Thomas Jefferson and Aaron Burr.

Nevertheless, the basic procedures detailed in the 1792 Act remain the same today, including the recording of three sets of certificates, sending one set by special delivery, one set by mail, and sending a third to the judge of the closest federal district court for safekeeping. It is comforting that in over 200 years, the Electoral College certificates have always arrived on time, and thus the courts have never been called upon to produce their backup copies. 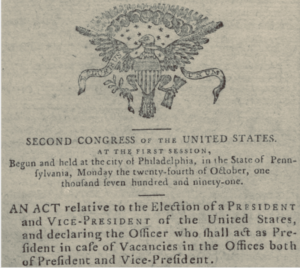 Pictured above is the masthead of one of the leading newspapers in 1792, which printed the entire 1792 Act. Click here for a link to the Gazette of the United States.

As described above, Section 7 of the Act authorized payment of 25 cents per mile for the special messenger delivering the Electoral College certificates to Congress. As Secretary of Treasury in 1792, Alexander Hamilton detailed the precise payments for all 16 states in a “Supplementary estimate” of appropriations that he prepared for Congress. The estimated mileage reimbursements ranged from $7.50 (New Jersey) to $234.25 (Kentucky). At the time, Philadelphia was the nation’s temporary capital in 1792.

Legislative History of the 1792 Act

The Act was adopted in the closing days of the First Session of the Second Congress, on March 1, 1792. The Act was signed into law by President Washington and Vice President Adams, who of course would be the two successful candidates in the upcoming election. The results of the 1792 election were “declared” at a joint session of Congress by Vice President John Adams, as the President of the Senate, on February 13, 1793. Click here for a link to the Annals of Congress.

Unlike the controversial Presidential Succession provisions which are described in Part II (pending), the Electoral College procedures of the Act did not generate much debate. The only objection noted in the Congressional record was the concern by Representative Nathaniel Niles (VT) that requiring the governors to certify the list of electors involved “a blending of respective powers” between the states and the federal government that was “degrading to the Executives of the several states.” For Niles, who was protective of states rights, it was “not warranted by the Constitution” for the federal government to make these specific demands on the states.

Representative Theodore Segdwick (MA) observed that if Congress were not authorized to call upon the governors, “he could not conceive what descriptions of persons they were empowered to call upon.”  Representative Abraham Clark (NJ) opined that the Committee was “creating difficulties where none before existed.” For Clark, the selection of electors was a privilege and would “create no uneasiness whatever.” Click here for a link to the Annals of Congress on December 22, 1791.

In fact, Massachusetts Governor John Hancock dutifully complied with the Act, but sent a note to the Massachusetts legislature protesting the purported right of Congress to force governors to certify lists under section 3 of the 1792 Act. In other words, while Hancock was was wiling to comply with the Act’s certification requirements, he did not want to concede powers to Congress. Click here for a discussion of the first presidential elections by historian Edward Stanwood.

Another topic of interest involved the timing of apportionment of electors. The Constitution merely allocates to each state the number of electors based on the number of Senators and Representatives to which each state was “entitled.” The Constitution is silent on the timing of apportionment in the context of presidential elections. The Act answered this question by providing that the allocation shall be based on the new (and more accurate) apportionment of an incoming Congress.

According to historian David Currie, this was “an eminently sensible provision”, but it was not obvious how Congress would resolve this issue. James Madison discussed the issue in a letter to Edmund Pendleton dated February 21, 1792. Madison explains that the northern states stood to lose seats in Congress under the 1790 census and strongly favored using the existing apportionment of the lame duck Congress. Nevertheless, the “intrinsic rectitude” of using the most recent allocation carried the day:

The Bill concerning the election of a President & Vice President and the eventual successor to both, which has long been depending, has finally got thro’ the two Houses. It was made a question whether the number of electors ought to correspond with the new apportionment or the existing House of Reps. The text of the Constitution was not decisive, and the Northern interest was strongly in favor of the latter interpretation. The intrinsic rectitude however of the former turned the decision in both houses in favor of the Southern. 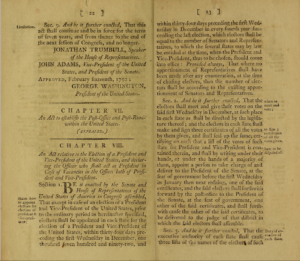 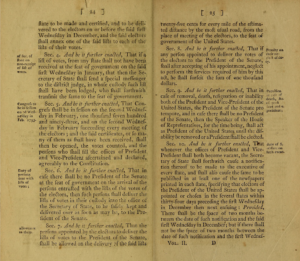 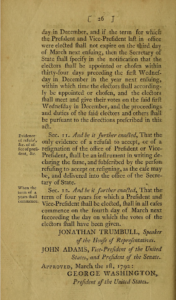 Discussion of the Electoral College in 1792

The Presidential election of 1792 was the first contested Presidential election in American history. George Washington was unanimously re-elected by the Electoral College to a second term. While Washington effectively ran unopposed, the newly emerging political parties contested the Vice Presidency. Federalist John Adams was re-elected Vice President. Yet, Adams was opposed by New York Governor George Clinton, who ran as the Democratic-Republican party candidate.

By 1792, the original 13 colonies had grown to 15 states with the addition of Kentucky, and Vermont. At the time, only 6 of the 15 states selected electors by popular election (Virginia, Pennsylvania, Massachusetts, Maryland, New Hampshire and Kentucky). In the remaining 9 states the state legislatures selected the Presidential electors and instructed them how to cast their vote for President.

Proposals to Replace the Electoral College

Several presidents, including Andrew Jackson, Richard Nixon, and Jimmy Carter have proposed replacing the Electoral College. In his first annual message to Congress in 1829, President Jackson observed that, “[t]o the people belongs the right of electing their Chief Magistrate.” Jackson argued that, “[a] President elected by a minority can not enjoy the confidence necessary to the successful discharge of his duties.” Almost 150 years later, in 1977 President Carter proposed a constitutional amendment for the direct popular election of the President which would “ensure that the candidate chosen by the voters actually becomes President.”

Five time in American history the candidate who won the popular vote lost the presidential election:

In 2004, the Congressional Research Service found that reform of the Electoral College has generated more proposed constitutional amendments than any other subject.  In 1969, the proposed Bayh-Celler amendment would have replaced the Electoral College with a two-round (or runoff) system under which a second ballot is used if the winner of the first round does not obtain 40% of the vote. The Bahy-Celler proposal (H.J. Res. 681) passed in the House by a vote of 339 to 70.  Even though President Nixon supported the amendment, the proposed amendment failed to pass in the Senate in 1970 after it was filibustered by Southern Senators and small state conservatives.

Counting Electoral Votes: An Overview of Procedures at the Joint Session, Including Objections by Members of Congress (Congressional Research Service, 2020)

Presidential Election of 1792: A Resource Guide (Library of Congress)

A History of the People of the United States, John Bach McMaster (1915)