How did Alexander Hamilton (and James Madison) intend the Joint Session of Congress to Operate?

After the Presidential election of 2020, the Joint Session of Congress meeting on January 6, 2021 generated breathless headlines. The largely ceremonial Joint Session is ordinarily a perfunctory exercise when the already ascertained Electoral College votes are officially “counted.” After a dozen Senators announced on January 2, 2021 that they would be objecting to certified electoral votes for President-Elect Biden, it is natural to ask what would Alexander Hamilton, one of the fathers of the Electoral College, think? 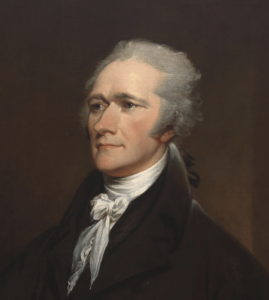 For the first time since the disputed election of 1876, President Trump is attempting to set aside properly certified Electoral College votes. Congress adopted the Electoral Count Act of 1887 to avoid a repeat of Hayes – Tilden election of 1876. While it is unlikely that Hamilton and the framers of the Constitution could have imagined electronic voting in 2020, it is nevertheless useful to review Hamilton’s intended operation of the Electoral College.

Background: What does the Constitution say?

After Electoral College votes are formally certified by the governors of all 50 states, the duly certified Electoral College votes are sent to Congress to be officially counted. Article II, Section 1, Clause 3 of the Constitution provides that the Vice President shall “in the Presence of the Senate and House of Representatives, open all the Certificates, and the Votes shall then be counted.”

In the event of an Electoral College tie (or if no candidate has a majority), the Constitution provides that the House shall pick a President in what is referred to as a “contingent election.” The House votes by “delegation” during a contingent election and each state has only one vote, regardless of population. It is important, however, not to confuse the specified procedure governing contingent elections with the ordinary procedures governing objections to electoral votes.

Objections by members of Congress to electoral votes are governed by the Electoral Count Act of 1887 (which is codified in Title 3, Chapter 1, of the United States Code). Among other things, the Electoral Count Act requires written, signed objections to be made “clearly and concisely, and without argument.” If at least one member of the House and one Senator submit proper objections, the House and Senate are required to separately consider the objections, with each Senator or Representative limited to five minutes and the debate not exceeding two hours per objection. 3 U.S.C. §15.

Unless the House and Senate both agree with an objection, the Electoral Votes timely certified by a state’s governor are deemed “conclusive.” 3 U.S.C. §5.  For this reason, where the House of Representatives is committed to voting down rouge objections, the January 6 outcome is all but certain. Moreover, Senate Majority Leader Mitch McConnell publicly congratulated President-Elect Biden in a speech on the Senate floor on December 15. In a private meeting with the GOP caucus, Senator McConnell asked his Republican colleagues not to force a vote, which would be futile and a “terrible vote.” Nevertheless, it appears likely that a sizable number of Senators led by Josh Hawley and Ted Cruz will submit written objections on January 6.

What would Hamilton say?

While recognition of President-Elect Biden’s victory on January 6th is inevitable, the question remains: What would Alexander Hamilton think about an effort to set aside properly certified electoral votes at the January 6th Joint Session of Congress? What would James Madison have to say about an effort to disregard the will of the electorate, after the courts have dismissed scores of cases brought by or on behalf of a defeated Presidential candidate.

While we cannot read Hamilton’s mind, we have access to the Federalist Papers, Madison’s notes of the Constitutional Convention, ratification debates and other primary sources. 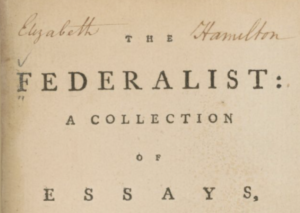 At the Constitutional Convention, Pennsylvania delegate James Wilson described the manner of selecting president as “in truth, one of the most difficult of all we have to decide.” While some delegates advocated for the direct election of the President, others preferred selection by state legislators, or by Congress. Ultimately, as was the case with many provisions, the Electoral College was the result of a variety of compromises.

James Madison and fellow Virginia George Mason argued against granting Congress the power to pick a President due to separation of powers concerns. Alexander Hamilton was particularly concerned with the disadvantages of allowing state legislatures to weaken the Presidency. In his six hour long speech on June 18, 1787, Hamilton initially proposed an Electoral College model under which the President would be selected by “electors, chosen by electors, chosen by the people” in electoral districts. Ultimately, the Committee of Eleven on Postponed Mattes (which included Madison, Roger Sherman, and Gouverneur Morris) formulated the final Electoral College compromise.

Ratification of the Constitution was vigorously contested by the Anti-Federalists. During the Virginia Ratification Convention, Madison spoke at length about “the method of electing the President” on June 18, 1788. Madison emphasized that “the people” choose the electors. According to Madison, “the choice of the people ought to be attended to.” 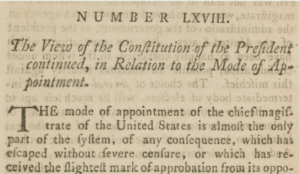 Hamilton’s views can perhaps best be summarized as follows:

In Federalist 68 Hamilton explained the purpose of the Electoral College and argued that the framers purposely excluded members of Congress from serving as electors to protect the integrity and independence of the electoral  process:

Hamilton expressed the concern that Presidential elections could generate dangerous passions which would be minimized by the autonomy provided by the “intermediate body of electors”:

Hamilton also worried about cabals, intrigue and corruption that might arise from “deadly adversaries of republican government”:

Hamilton also had a profound respect for the rule of law. In his Tully No. III letter to the American Daily Advertiser dated August 28, 1794 Hamilton wrote:

Hamilton also had a deep respect for the role of the courts as “faithful guardians of the Constitution” and would not have wanted to see the judiciary’s role circumvented, as has been proposed by anti-Biden objectors. In Federalist 78 Hamilton famously described the judiciary as the least dangerous of the branches of government, but recognized that judicial independence was the “citadel of the public justice and the public security.”

Hamilton explained that properly functioning and independent courts were necessary:

After the contested Election of 1800, Hamilton proposed amending the Constitution to permit the direct election of Electors. Hamilton’s January 29, 1802 resolution declared that:

In sum, Alexander Hamilton would not have supported an effort to set aside properly certified Electoral College votes representing the “sense of the people” – and millions of popular votes – during the January 6th Joint Session of Congress. Nor would Hamilton have looked kindly at efforts to circumvent the courts and the rule of law, as officially certified by 50 governors in accordance with the Electoral Count Act.

Federalist 68 as originally published in the New York Packet

Why is the so-called “Pence Card” a canard?