In late December of 2020, the factually and legally challenged hashtag “Pence Card” went viral on social media. It was re-tweeted by President Trump on December 23, 2020. This post will explain why the so-called “Pence Card” legal strategy is based on a basic misreading of the U.S. election law.

The Pence Card “theory” wrongly asserts that Vice President Mike Pence holds the power to unilaterally reject the certified election results contrary to the safe harbor provisions of the Electoral Count Act of 1887, as amended in 1948. Click here for a discussion of the 1887 Act and the Election of 1876.

For a discussion of the legislative history of the first act of Congress addressing the Joint Session of Congress that formally recognizes Presidential election results, click here for the “Act Relative to the Election of the President and Vice-President…” (generally referred to as the “Presidential Succession Act of 1792”). This original legislation governing the Joint Session of Congress assigned no substantive role to the Vice President. In fact, the 1792 Act is a compelling indication of the intent of the framers of the Constitution since many of them were members of the Second Congress in 1792.

Like all good conspiracy theories, the “Pence Card” rumor is grounded in a thin veneer of truth. The Pence Card even has its own purported Presidential Memorandum, seemingly using White House stationary to describe “Operation” Pence Card. The likely fraudulent memo cites to various legal authorities including 3 U.S.C. § 12.

Section 12 of Chapter 3 of the United States Code provides as follows:

Failure of certificates of electors to reach President of the Senate or Archivist of the United States; demand on State for certificate

When no certificate of vote and list mentioned in sections 9 and 11 of this title from any State shall have been received by the President of the Senate or by the Archivist of the United States by the fourth Wednesday in December, after the meeting of the electors shall have been held, the President of the Senate or, if he be absent from the seat of government, the Archivist of the United States shall request, by the most expeditious method available, the secretary of state of the State to send up the certificate and list lodged with him by the electors of such State; and it shall be his duty upon receipt of such request immediately to transmit same by registered mail to the President of the Senate at the seat of government.

To state the obvious, the House is controlled by Democrats and Senate Majority Leader Mitch McConnell publicly congratulated President-Elect Biden in a speech on the Senate floor on December 15. While individual senators can submit objections, a full vote of both houses of Congress is required to set aside any electoral votes. In a private meeting with his caucus, Senator McConnell asked his Republican colleagues not to force a vote, which would be futile and a “terrible vote.”

The closest swing states in the 2020 election were Georgia (.2% margin for Biden), Arizona (.3%), and Wisconsin (.7%). By way of example, the Electoral College vote in Georgia was not only certified by Georgia Governor Brian Kemp on November 3, 2020, the Georgia vote was re-certified by Governor Kemp on December 7, 2020 following a hand recount. 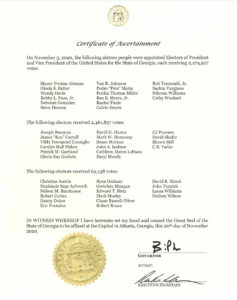 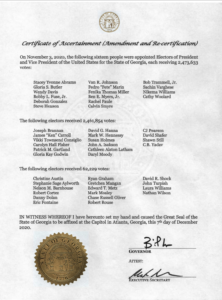 Thus, the “Pence Card” is not merely a losing hand, it is a fabricated canard. It is absolutely true that Vice President Pence, as the president of the Senate, will formally preside over a joint session in Congress to count the electoral votes. Nevertheless, his role is simply ceremonial – to open and count the votes. The Vice President does not rule on their validity.  The Twelfth Amendment merely provides that the Vice President “shall, in the presence of the Senate and House of Representatives, open all the certificates and the votes shall then be counted…”

Section 12 of the 1887 Act governs the procedure when the votes have not arrived in Washington. Section 12 provides that if the certificates have not “been received,” the Vice President shall simply “request” by the most expeditious method available, that the secretary of state of the respective state “send up the certificate and list lodged with him by the electors of such State…” In other words, Section 12 contains backup procedures if the electoral certificates were “lost in the mail.”

Yet, the Electoral College “certificates” not only arrived, they arrived in triplicate. They are also certified by the governors of all 50 states, prior to the “safe harbor” deadline contained in 3 U.S.C. §5. According to law, these votes are “conclusive.” The certified votes may only be overruled by both houses of Congress on January 6 (which simply put is not going to happen).

The suggestion that the Vice President holds the power to unilaterally reject electoral college votes is directly contrary to the constitutional procedures created by the founders. Article II, Section 2, Clause 2 of the Constitution carefully limited who could serve as members of the Electoral College by specifying that “[n]o Senator or Representative, or Person holding an Office of Trust or Profit under the United States, shall be appointed an Elector.”

As explained by Alexander Hamilton in Federalist 68, the reason why the Constitution barred members of Congress and federal officials from serving as electors was that they “might be suspected of too great devotion to the president in office.” According to Hamilton, the Electoral College would be “intermediate agents” who would enter into their task “free from any sinister bias.” Indeed, as the Presiding officer of the Senate, the Vice President is only permitted to vote to break ties.

Thus the “Pence card” is a canard. To use a poker phrase, those who are betting on any other result are “drawing dead.” Using gambling math, a “sucker’s bet” is a low odd bet with a high potential payoff, but an enormous house edge. Accordingly, given the unambiguous legal requirements and the composition of the House, the Pence Card doesn’t even qualify to make a wager, notwithstanding the House odds.