Hening’s Statutes at Large: A Collection of the Laws of Virginia from the First Session of Legislature in the Year 1619, published by an act of the General Assembly of Virginia (Richmond 1809). 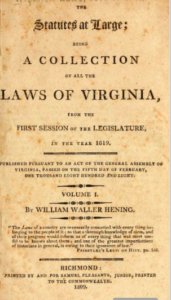 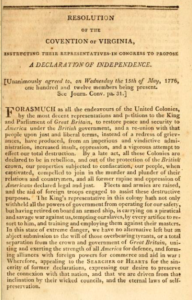 In the preface Hening summarizes his work with Jefferson and quotes from correspondence with the former President about the project. Henning also provides a brief overview of Virginia history. In addition to the charters and statutes of Virginia, volume 1 also contains a list of Virginia Governors.

Volume 1 begins with the May 15, 1776 Resolution of the Fifth  Virginia Convention which advised Virginia’s delegates to the Second Continental Congress to declare independence from Britain. This Resolution provided authorization and instructions for Henry Lee to propose the “Resolution for Independence” – also known as the Lee Resolution – which led to the Declaration of Independence.

On May 15, the Convention declared that the government of Virginia was “totally dissolved” in light of the King George’s repeated injuries and his “abandoning the helm of government and declaring us out of his allegiance and protection.” Interestingly, the only delegation to the Continental Congress that had been affirmatively instructed to declare independence was Virginia. A month earlier North Carolina had adopted the Halifax Resolves on April 12, 1776, which was the first official colonial action calling for independence. The Resolves were unanimously adopted in Halifax, NC and encouraged all encouraged delegates to the Continental Congress from all the colonies to push for independence.

Volume 1 also contains the U.S. Constitution, the Bill of Rights, the Virginia Declaration of Rights, and the Article of Confederation. 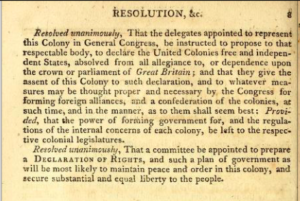 In 1823, the Virginia General Assembly determined that the proceeds from the sales of Hening’s Statutes at Large would be used to fund a public library, which became the Virginia State Library.

All remaining volumes can be found on the Archive.org website using this link 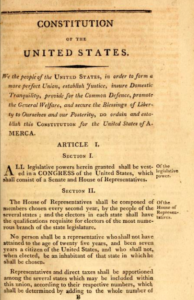 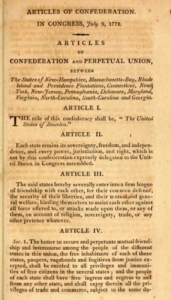 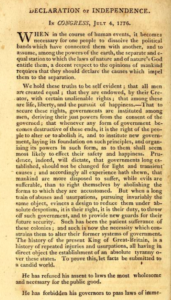 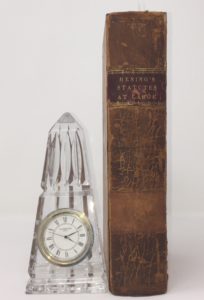 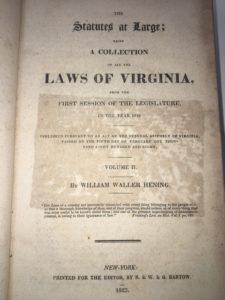 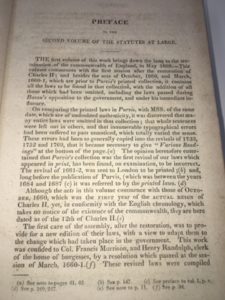 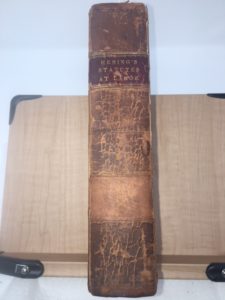