Questions and Issues for Further Investigation

Before exploring the issues and questions discussed below, readers are invited to review prior posts about the Hamilton Authorship Thesis (the HAT) and the Committee on Style Division of Labor Hypothesis (the DLH).

Part I introduces the Constitution’s Cover Letter and the Hamilton Authorship Thesis. Part I provides background about the cover letter and describes its objectives. Part I also explains how the cover letter has largely been “forgotten,” despite its importance during the late 1780s.

Morris never claimed authorship of the cover letter, but he did proclaim in 1814 that his were the fingers that wrote the Constitution. In 1831, Madison agreed and acknowledged that, “the finish given to the style and arrangement of the Constitution, fairly belongs to the pen of Mr. Morris.” Again, neither Morris nor Madison ever spoke to the authorship of the cover letter.

The HAT offers a ready explanation: Hamilton wanted it this way. The HAT asserts that Hamilton succeeded in concealing his identity for over 230 years. Nonetheless, signature Hamiltonian fingerprints can be found all over the cover letter.

Beginning in 1780, Hamilton wrote detailed proposals along with the popular Continentalist essays that began to make the case for systematic reform of the Articles of Confederation. In 1786, Hamilton authored the report of the Annapolis Convention which called for the convening of the Constitutional Convention in Philadelphia. In many respects, it could be argued that Hamilton had been “drafting” the cover letter for almost a decade.

Part II sets forth a detailed presentation of the HAT. In a nutshell the HAT argues that Hamilton was the principal author of the Constitution’s cover letter, which is replete with Hamilton’s linguistic and thematic “fingerprints.” The HAT contends that Hamilton, more than any other delegate, understood the uphill battle that the Constitution would face, particularly in New York. The HAT further suggests that Hamilton, as one of the nation’s foremost polemicists, appreciated the importance of what the cover letter represented.

Hamilton understood the symbolic and political value of a cover letter signed by the beloved former Commander in Chief. Ultimately, the cover letter would launch the opening salvo in a national public relations campaign that would grip the nation until the Constitution was successfully ratified in 1788. The HAT also argues that Hamilton used the cover letter as a vehicle to specifically refute objections by Robert Yates and John Lansing. Hamilton’s two co-delegates from New York departed the Philadelphia Convention due to their vocal opposition to the Great Compromise (otherwise known as the Connecticut Compromise between the New Jersey and Virginia plans).

Admittedly, the biggest hurdle for the Hamilton Authorship Thesis is the fact that the only extant draft of the cover letter is not in Hamilton’s handwriting. Assuming for the sake of argument that Morris “wrote” the working draft, the HAT argues that Morris was not the “author” of the cover letter. Rather, the HAT theorizes that Hamilton purposely concealed his identify as the letter was intended for Washington’s signature. As was the case with other Washington letters, Hamilton never publicly revealed his work. He also knew that if his identity became public it would weaken the value of the cover letter during the ratification debates, particularly in New York.

This post, Part IV, is intended to set forth a range of unanswered questions for historians and researchers. Others, including collectors and archivists might have access to records which are not digitized on the National Archive’s founders.archive.gov website.

There are several ways to contribute to what is intended below to be a “community” project. Statutesandstories welcomes ideas and contributions and wants to afford full credit to others:

What we know: We know the identity of the five members of the Committee on Style (Morris, Madison, Hamilton, King and Johnson). We know when the Committee was created (9/8/1787) and when it submitted its report (9/12/1787). Based on Johnson’s diary, we know that the Committee met on at least three occasions (the evening of 9/8, 9/10 and 9/11), but minutes were never taken of Committee meetings. How the Committee operated is thus unclear.

The oldest member of the Committee on Style, William Samuel Johnson, was appointed Chairman. According to Madison, Johnson assigned the “task” of finalizing the Constitution to Morris. This suggests that other “tasks” were assigned to other Committee members.

Meeting date and the Society of the Cincinnati

What we know: The Declaration of Independence and the Articles of Confederation each had cover letters. Thus, there was a tradition of using transmittal letters to the states/colonies for important political documents. 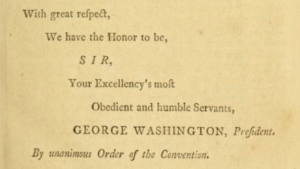 Final copy of the cover letter

Washington’s circular letter to the states 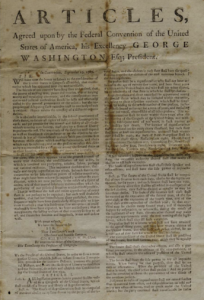 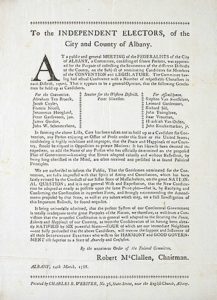 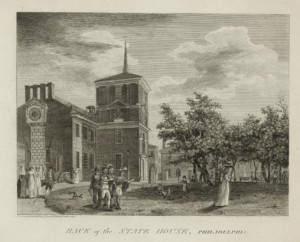 In 1787, Philadelphia was the nation’s largest city. Pictured above is the back of Independence Hall, which is approximately 5 blocks from Robert Morris’ house (pictured below) where Washington stayed during the summer of 1787.  Other committee members lodged within easy walking distance of one another and Philadelphia’s famous taverns. 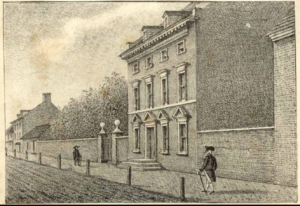