For over two hundred and thirty years historians were unaware of important behind-the-scenes details of the last days of the Constitutional Convention. New York delegates Robert Yates and John Lansing left the Convention on July 10, 1787. Following their departure from Philadelphia, it was universally assumed that they were “never to return again.”

Judge Robert Yates’ aborted effort to return to the Convention was discovered in late 2021. This post, Yates Returns Part V, provides additional evidence of the “Yates Returns” timeline, based on court records and published legal notices from the late summer and early fall of 1787.

Until last year’s discovery, first revealed here, and updated here, historians had no reason to doubt the “conventional” narrative. As described by Maryland Anti-Federalist delegate Luther Martin, “[t]he Honourable Mr. Yates and Mr. Lansing of New-York left us – They had uniformly opposed the system, and I believe, despairing of getting a proper one brought forward, or of rendering any real service, they returned no more.…” (emphasis added).

In their December 1787 report to New York Governor George Clinton, Yates and Lansing themselves acknowledged that, “We were not present at the completion….but before we left the convention, its principles were so well established as to convince us, that no alteration was to be expected….our further attendance would be fruitless and unavailing, rendered us less solicitous to return.”

Following the Yates Returns discovery in November of 2021, Statutesandstories.com has been carefully examining overlooked archival records that might shed light on Robert Yates’ schedule in August and September of 1787. This post provides an update on the ongoing process of reviewing court records and files.

Background about the New York Supreme Court of Judicature

By way of background, today’s New York Supreme Court (formerly the Supreme Cort of Judicature) was established in 1691, making it one of the oldest courts of general jurisdiction in the United States. Unlike other states, New York’s Supreme Court was and remains a lower level, trial level court.

Pursuant to legislation adopted by the New York Assembly, the Supreme Court of Judicature held jurisdiction over both criminal and civil cases. It was also empowered to hear appeals from inferior local courts. The Court’s “bench” consisted of a single Chief Justice along with two Associate Justices in New York City and Albany. Dating back to colonial times, appeals were taken to the royal governor and his council. In theory, appeals could subsequently be raised to the Privy Council in London.

[T]he Supreme Court is hereby fully empowered and authorized to have cognizance of all pleas, civil, criminal and mixed, so fully and amply to all intents and purposes whatsoever, as the courts of Kings Bench, Common Pleas and Exchequer, within their “Majesties” Kingdom of England have or ought to have; in and to which Supreme Court all and every person and persons whatsoever shall or may, if they shall so see meet, commence or remove any action or suit, the deed or damage in any such action or suit being upwards of twenty pounds, and not otherwise, or shall or may by warrant, writ of error or certiorari, remove out of any of the respective courts of Mayor and Aldermen, Sessions and Common Pleas, judgment, information or indictment there had or depending, and may correct errors in judgment, or reverse the same, if by just cause, provided always that the judgment removed shall be upwards of the value of twenty pounds.

New York’s first constitution was adopted in 1777. Article 35 declared that:

[S]uch parts of the common law of England and of the statute law of England and Great Britain, and of the acts of the legislature of the colony of New York, as together did form the law of the said colony . . . shall be and continue the law of this State subject to such alterations and provisions, as the Legislature of this State, shall from time to time, make concerning the same.

Article 35 retained the colonial court structure inherited from England. Until substantially reorganized in 1847, the Supreme Court of Judicature was New York’s highest court with original jurisdiction.

The first Chief Justice of New York’s Supreme Court of Judicature was John Jay. In 1790, Robert Yates was appointed Chief Justice by Governor George Clinton, becoming only the third Chief Justice post-independence. In 1787, John Lansing was the Mayor of Albany and a practicing lawyer. Lansing would subsequently become the fourth Chief Justice in 1798, after Yates’ retirement.

Until 1820, the Supreme Court of Judicature held its regular sessions in only two locations, New York City and Albany. In 1785, it was decided that the Court should hold two terms each year in Albany. While individual judges would travel “the circuit” on a regular basis to surrounding counties, Judge Yates was based out of his home in Albany. When traveling on circuit he would sit with local judges on the Court of Oyer and Terminer.

Because Albany was one of the court’s only two fixed locations in 1787, this post grows out of continuing efforts to drill down into Albany court records. In particular, this post focuses on Judge Yates’ calendar in the late summer and early fall of 1787, after he departed the Constitutional Convention on 10 July 1787 with John Lansing. The Yates Returns’ timeline is discussed in Part IV.

On April 13, 1786 New York adopted an important, early bankruptcy law, the “Act for Relief of Insolvent Debtors” (New York Laws of 1786, Ninth Session, Chapter 24). At the time, the nation was facing a severe recession. Shays’ Rebellion in Massachusetts is a well-known example of the economic conditions and resulting dislocations which preceded the Constitutional Convention in May of 1787. Not surprisingly, the new bankruptcy law generated a large volume of court filings. The Act can be found on page 242 of the 1886 republished edition of the Laws of the State of New York, Vol II.

New York’s Act for Relief of Insolvent Debtors set forth a detailed procedure to allow a debtor to be discharged. The alternative was a horrific and often indeterminate stay in debtor’s prison. 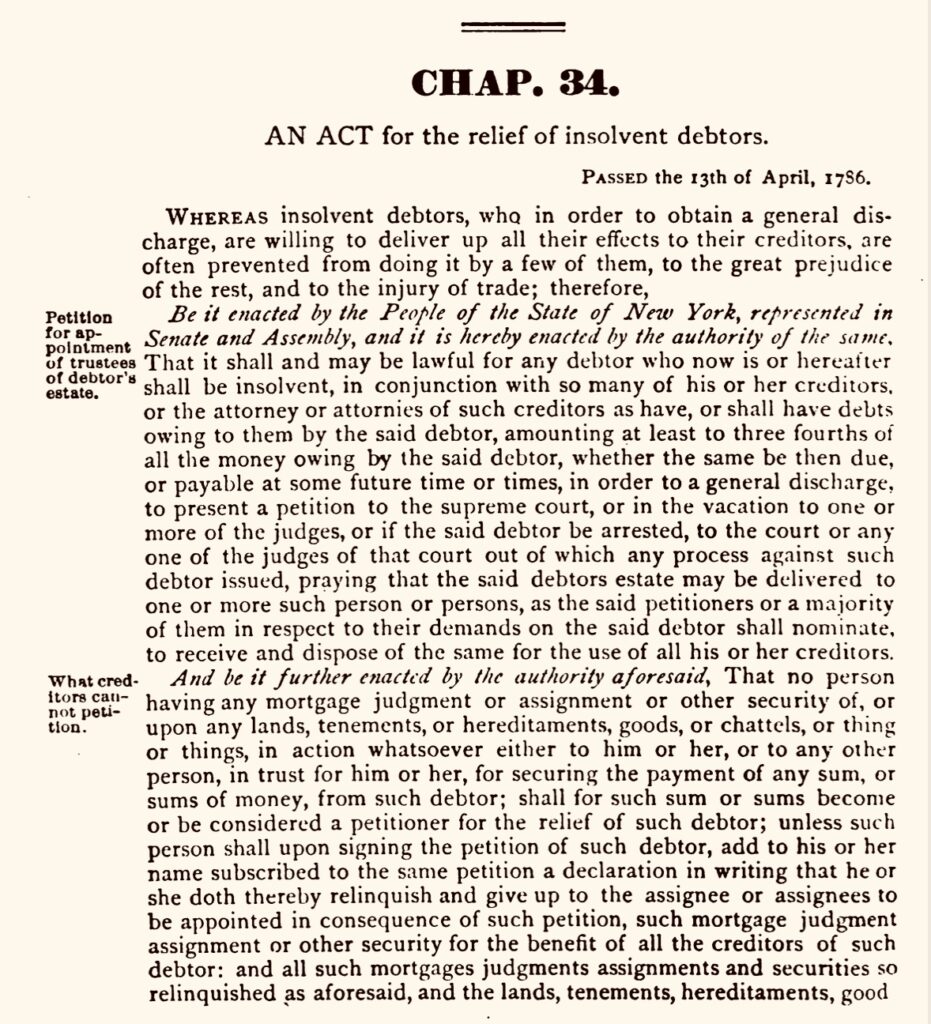 Copied above is the title and first page of the six-page Act. Importantly, the sixth paragraph of the Act required that “notice shall be given by the petitioners to all the creditors of such debtor, by advertising the same in two or more of the public news papers, to show cause if any they have, by such a day as shall be appointed by the court….why an assignment of said debtors estate should not be made, and the debtor discharged.”

Copied below is a sample legal notice to the creditors of Joseph Harrison, based on an Order signed by Judge Yates on 4 September 1787. The Harrison notice was published in the Albany Gazette on October 15, 1787. 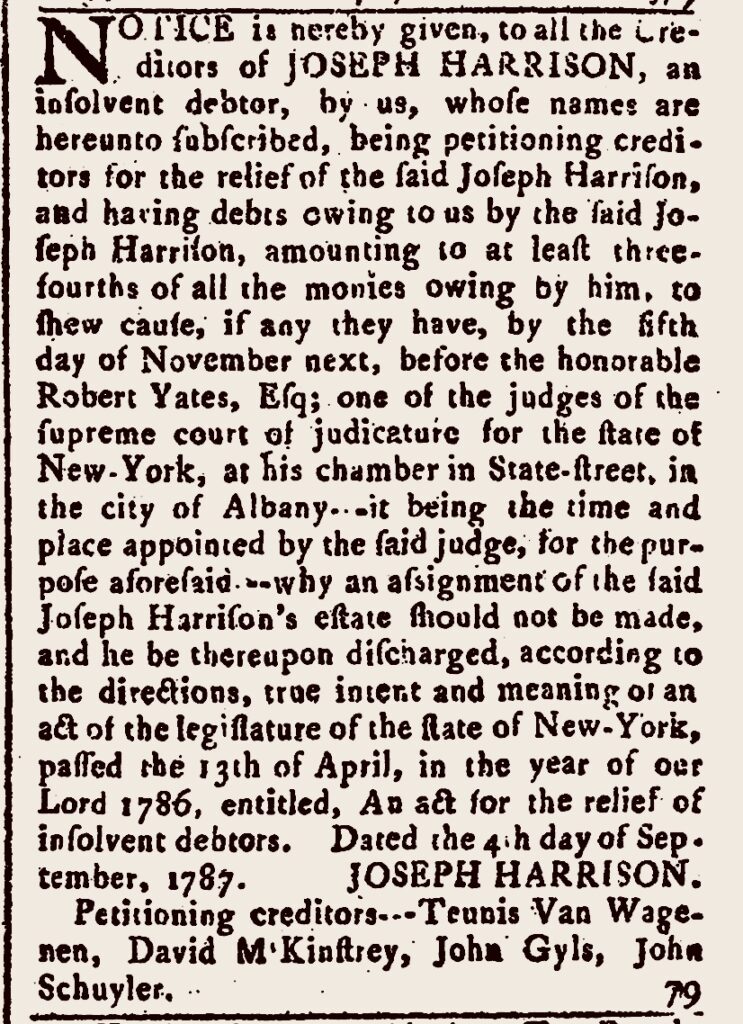 Under the Act, each new case filing would ordinarily generate the following activity and court records:

The Harrison legal notice is powerful evidence confirming the timeline for Judge Robert Yates’ return trip to the Convention. The information discussed below in the Harrison, Kent and Tripp cases aligns perfectly with the fact that Judge Yates left Albany in mid-September to return to the Convention, but arrived too late.

The following chart gathers together information from a dozen insolvency cases heard by Judge Yates in 1787 and early 1788. Importantly, the chart establishes that a hearing date would regularly be set approximately ten days to two weeks following the entry of the initial order in an insolvency case under the 1786 Act.

The Kent and Harrison cases are significant for several reasons. First, Judge Yates’ entry of an order in the Kent case on July 18 confirms that he was back in Albany, hearing cases ten days after leaving the Constitutional Convention on July 10. Thus, the Kent case can be considered an important bookend in the “Yates Returns” timeline.

Two hundred and thirty years later, we now know why the hearing in the Harrison case was delayed. Judge Yates expected that he would be out of town in Philadelphia starting in mid-September.

As discussed above, ordinarily the hearing in an insolvency case was held ten to fourteen days after the entry of the initial order. Yet, on September 4 Judge Yates set a hearing date in the Harrison case for November 5, two months – not two weeks – from the date of the initial order. Why?

Based on other evidence summarized in Part I, Judge Yates attempted to travel to Philadelphia in mid-September. He submitted a bill for six days of travel to New York City, where he learned that the Philadelphia Convention had “risen.” After learning that he was too late, Yates then turned around and spent six days returning to Albany. According to records of the New York State Auditor discovered in 2021, Judge Yates requested and was paid £ 19 and 4 shillings from the State of New York. This sum represented a total of twelve days of travel, at 32 shilling per day, from Albany to New York City (and back).

The ironically named Tripp case, provides the final bookend on the “Yates Returns” timeline. On September 26, Judge Yates was back in Albany where he entered the initial order in the Tripp case.

This expanded timeline, using the Kent, Harrison and Tripp insolvency cases is illustrated in the following chart:

The published court notices in the Kent and Tripp cases are copied below. Each was printed in the Albany Gazette, pursuant to the sixth paragraph of New York’s Act for Relief of Insolvent Debtors. 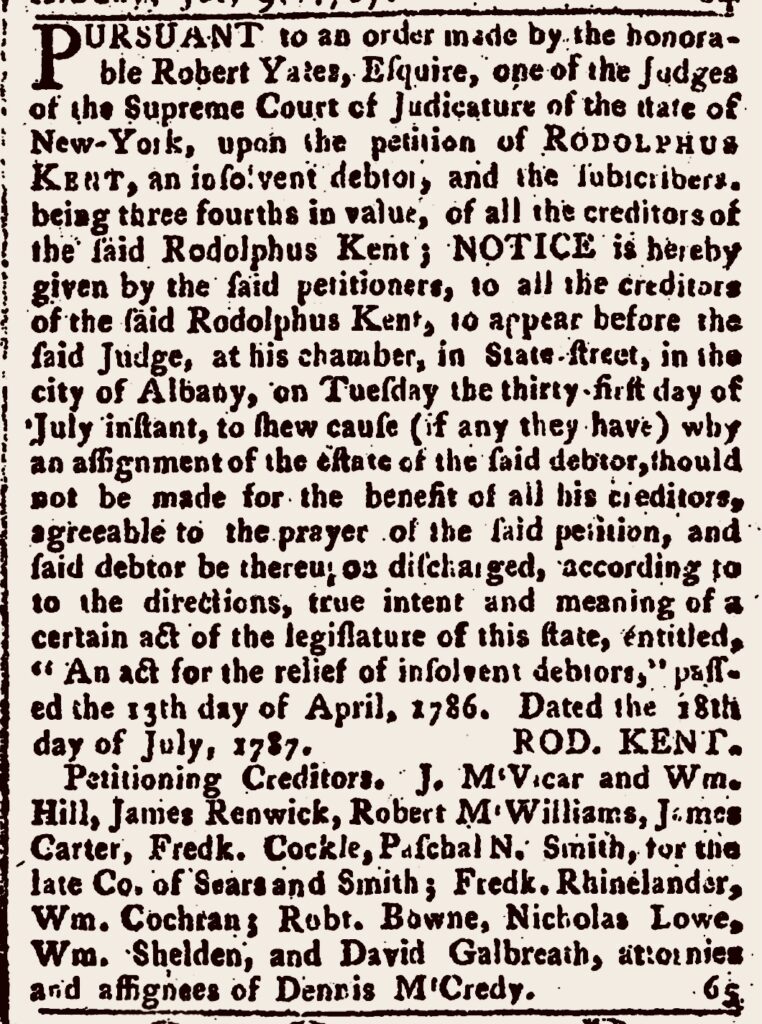 Copied below is the first notice published in the Tripp case. 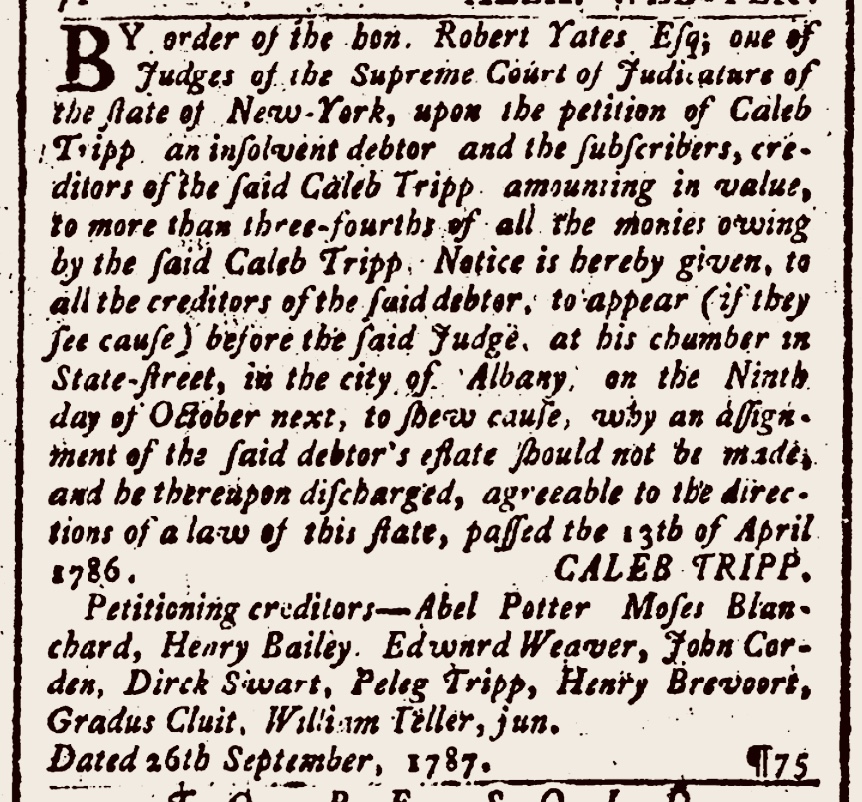 Copied below is the second notice in the Tripp case, along with notices in the Moulton and Tuttle cases. Other notices described in the chart above are available upon request by any researcher/fellow traveler.

This post will be updated with images from the New York State Archives, Albany Hall of Records, and any other court records that become available. Scholars and other researchers are invited to assist with this continuing investigation.

A History of the Bench and Bar of Albany County, W. Dennis Duggan (Historical Society of the New York Courts, 2021)

William Wyche, Treatise on the Practice of the Supreme Court of Judicature of the State of New-York in Civil Actions (New York, 1794)