John Lewis and the Civil Rights Act of 1964

The nation lost a beloved civil rights icon with the recent passing of Congressman John Lewis. Lewis was engaged in nearly all of the pivotal events in the civil rights movement: the Nashville lunch counter sit-ins in 1960, the Freedom Rides in 1961, the March on Washington and Martin Luther King’s I Have A Dream Speech in 1963, the Mississippi Freedom Summer of 1964, and the Bloody Sunday march across the Edmund Pettus Bridge in 1965. Perhaps his proudest achievement was the adoption of the Voting Rights Act of 1965 (the “VRA”), which built upon the Civil Rights Act of 1964.

The VRA of 1965 was one of the most effective civil rights laws in American history and arguably one of the most consequential laws ever passed by Congress. This two-part post attempts to recount the story of John Lewis’ struggle for the adoption of the Civil Rights Act of 1964 and the Voting Rights Act of 1965. We are only beginning to understand the debt of gratitude that is owed to John Lewis and his allies who were not afraid to get into “good trouble, necessary trouble.”

Part I of this post discusses Lewis’ civil rights legacy leading into the historic March on Washington in 1963, his meeting with President Kennedy and the Civil Rights Act of 1964. Part II  continues with a discussion of Bloody Sunday and the adoption of the Voting Rights Act of 1965. It was not by accident that the Voting Rights Act was introduced by President Johnson a week after John Lewis led the historic march over the Edmund Pettus Bridge, where he was almost killed by the Selma Police. 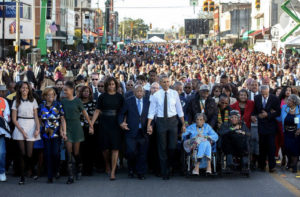 John Lewis was the son of sharecroppers, born into a family of ten children in rural Alabama. In 1957 he wrote to Dr. Martin Luther King and was invited to visit MLK in Montgomery.

As a student, Lewis organized sit-ins in segregated lunch counters in Nashville, resulting in his first arrest. The Nashville sit-ins were among the earliest direct action campaigns targeting racial segregation in the South.

As described by David Halberstam, then a reporter for The Nashville Tennessean:

The protests had been conducted with exceptional dignity, and gradually one image had come to prevail — that of elegant, courteous young Black people, holding to their Gandhian principles, seeking the most elemental of rights, while being assaulted by young white hoodlums who beat them up and on occasion extinguished cigarettes on their bodies.

Freedom Riders and the Civil Rights Act of 1964

In 1961 Lewis was one of the 13 original Black and white Freedom Riders who sought to expose segregation in public transportation. The Freedom Rides were organized by the Congress of Racial Equality (CORE) and were designed to pressure the federal government to enforce Supreme Court decisions which were being ignored in the Jim Crow South. 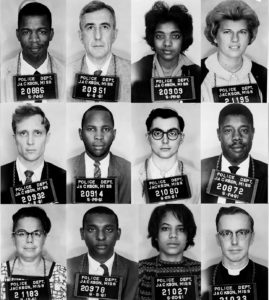 Lewis and his fellow activists traveled by bus from Washington, D.C., to New Orleans. Starting in South Carolina the Freedom Riders experienced horrific violence. For example, Lewis was rendered unconscious lying in a pool of blood outside the Greyhound Bus Terminal in Montgomery, Alabama.

When the Freedom Riders arrived in Anniston, Alabama, a mob firebombed their bus on May 14. Assured by local officials that they would look the other way, the KKK beat the passengers as they fled the burning bus. 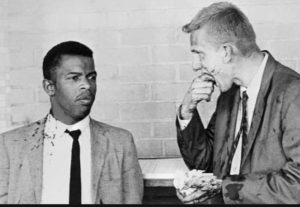 Rather than being protected by the police in Jackson, Mississippi, Lewis was arrested after he entered a “whites only” area of the city’s segregated bus station. Lewis spent 31 days in Mississippi’s notorious Parchman Penitentiary for “disorderly conduct.”

Over the next several months more than 60 additional Freedom Rides continued. Despite the danger, Lewis and the Freedom Riders blazed the path for the eventual adoption of the Civil Rights Act of 1964.

Three years later, the Civil Rights Act of 1964 was adopted. The landmark law ended segregation in public facilities, provided for integration of schools, and made employment discrimination illegal.

As chair of the SNCC, Lewis was one of the “Big Six” leaders who helped organize the 1963 March on Washington. More than 250,000 demonstrators assembled at the Washington Monument, where the rally began with celebrities and musicians. Participants then marched across the Mall to the Lincoln Memorial. The day ended with a meeting at the White House with the march leaders and President Kennedy.

At the age of 23, Lewis was the youngest speaker at one of the most important days in the history of the Civil Rights Movement. Lewis’ speech, which proceeded Martin Luther King’s I Have a Dream Speech, was the event’s most assertive address, vowing to keep marching “until the Revolution of 1776 is complete.” 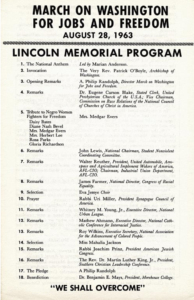 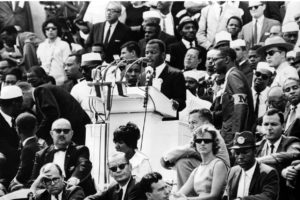 On June 11, 1963, President Kennedy addressed the nation to propose civil rights legislation. Click here for a link to Kennedy’s televised speech from the Oval Office. The following day Medgar Evers was assassinated in front of his home in Mississippi. President Kennedy submitted his civil rights bill to Congress the following week. It was immediately condemned by Southerners. Strom Thurmond described the bill as “unconstitutional, unwise and beyond the realm of reason.” Other Senators described the legislation as a “complete blueprint for the totalitarian state. . . “

The law was adopted in the House on February 10, 1964, but faced vocal opposition in the Senate. The “Southern Bloc” of 18 southern Democratic Senators led by Robert Byrd (D-WV) and Strom Thurmond (D-SC) filibustered for 54 days.

While Congress debated the bill, two tragic events occurred. On September 15, 1963, the Sixteenth Street Baptist Church in Birmingham, Alabama, was bombed. Four young African-American girls died in the blast. On November 22, 1963, President Kennedy was shot in Dallas. Two days after Kennedy was buried, President Johnson addressed a joint session of Congress to urge adoption of the Civil Rights Act of 1964. In one of his finest moments, Johnson argued in his November 27 speech that:

…No memorial oration or eulogy could more eloquently honor President Kennedy’s memory than the earliest possible passage of the civil rights bill for which he fought so long. We have talked long enough in this country about equal rights. We have talked for one hundred years or more. It is time now to write the next chapter, and to write it in the books of law.

The expansive Civil Rights Act of 1964 contains eleven titles. The most important provisions are described below:

This post continues in Part II which discusses Lewis’ march across the Edmund Pettus Bridge on Bloody Sunday and the adoption of the Voting Rights Act of 1965.

John Lewis Remembers His Arrest for Using a ‘White Bathroom’ 59 Years Ago, Newsweek