Article I, Section 8 of the U.S. Constitution grants Congress the power to “establish an uniform Rule of Naturalization.” Yet, the Constitution does not define the term citizen or provide much guidance to Congress.

The Naturalization Act of 1790 was the first attempt by Congress to  comply with its constitutional mandate for the new country. (Click here for more background about the first Congress.) Directly tracking Art. I, Sec. 8, the Act was entitled an act to “establish an uniform Rule of Naturalization.” (The ‘an’ is not a typo since it appears in both the Constitution and in the title of the Act, consistent with the grammatical conventions of the 18th Century).

The simple law consisted of a single paragraph which is copied below in its entirety. The Act established a uniform rule for naturalization for any “free white person, who shall have resided within the limits and under the jurisdiction of the United States for the term of two years.”

Procedurally, an alien applicant for citizenship would simply submit an “application to any common law Court of record in any one of the States wherein he shall have resided for the term of one year at least.” Since the federal court system was still in its infancy, having just been established by the Judiciary Act of 1789, it made sense to use the state court system for the naturalization process.

The Act merely contained three requirements: 1) two years of residency (having lived one year in the state of application); 2) satisfying the judge that the applicant was of good moral character; and 3) taking an “oath or affirmation” to support the Constitution. Upon “proof to the satisfaction of such Court  that he is a person of good character, and taking the oath or affirmation prescribed by law to support the Constitution of the United States…thereupon such person shall be considered as a Citizen of the United States.”

The Act further provided that “the children of such person so naturalized, dwelling within the United States, being under the age of twenty-one years at the time of such naturalization, shall also be considered as citizens of the United States.” Similarly, the Act provided that the children of U.S. citizens born abroad “shall be considered as natural born citizens.” The term “natural born citizen” is a requirement to become President taken from Art. II, Sec. 5. of the Constitution, but the term is not otherwise defined in the Constitution or in the Naturalization Act of 1790.

Because the Act only granted citizenship to free white persons, it did not apply to slaves or  indentured servants, who were considered property. As a result, the Act suggests that non-white residents and immigrants were not eligible to be naturalized. Nevertheless, the Act was silent about the citizenship status of non-white persons born on American soil.

Although the Act specified that children of U.S. citizens born abroad would be citizens, the Act provided that the right of citizenship would “not descend to persons whose fathers have never been resident in the United States.” In other words, citizenship was passed down from father to child (patrilineal descent).  Under the common law of coverture in the late eighteenth century, a married woman took the nationality of her husband. Accordingly, the Act arguably should not be read to include children of American mothers and alien fathers, because a formerly American citizen mother would not be considered a United States citizen under the law of coverture.

By requiring two years of American residency prior to naturalization, Congress likely wanted foreigners to be exposed to American democracy and to prove their loyalty and good moral character.

Library of Congress copy of the statutes at large

Subsequent Naturalization Acts: While the 1790 Act only required immigrants to have lived in the US for two years, growing anti-immigrant sentiment led Congress to increase the residency requirement to five years with the Naturalization Act of 1795. (1 Stat. 414-415).

In 1798, concerns over brewing hostilities with France led Congress to pass the Alien and Sedition Acts, which among other things permitted the imprisonment and deportation of immigrants, criminalized seditious speech, and more than doubled the minimum residency requirement for naturalization to 14 years.  (1 Stat. 566-569). (Click here to read about the Alien and Sedition Acts.) The Naturalization Act of 1802 reduced the residency requirement back to five years.

President Martin Van Buren, elected in 1837, became the first natural born president born in the United States after the Constitution was adopted.

Expanded definition of citizen: African Americans would need to wait 78 years, until the Fourteenth Amendment was adopted in 1868, to gain citizenship under federal law. (Click here to read more about the Fourteenth Amendment.) Native Americans only become citizens through individual treaties or intermarriage, leading to the 1924 Indian Citizenship Act. Asian immigrants were ineligible for citizenship until the 1954 McCarran-Walter Act removed all racial barriers to naturalization.  Without citizenship, nonwhites were denied the right to vote, own property, sue, or testify in court. 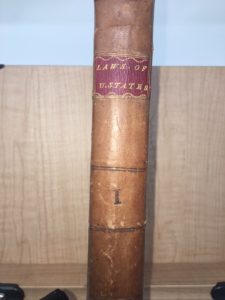 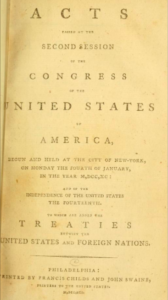 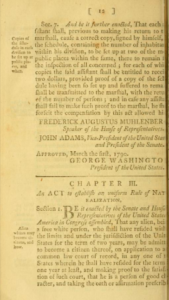 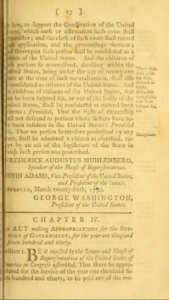