In all of American history a total of three Presidential elections were decided by the House of Representatives. All three examples occurred in the 19th Century. As discussed below, the Election of 2020 is not comparable with the elections of 1800, 1824, or 1876. In 2020 it has been reported that unprecedented efforts have been undertaken to trigger the contingent election process in the House of Representatives. When historians look back on the still unwritten history of 2020 it is hoped that they will note that American democracy was tested but ultimately undaunted.

In 2020 we learned that democracy is more fragile than previously thought. Every so often democracy reminds us that it should not be taken for granted. A strong democracy requires not only public participation at the polls, but also an informed electorate, public confidence, robust institutions and agreement over foundational assumptions.

This post will provide an overview of the three elections in American history that were decided by the House (referred to as “contingent elections”). By contrast, President-elect Biden won the Election of 2020 by more than 6,000,000 popular votes and an anticipated 74 vote electoral college margin of 306 to 232. Accordingly, the contingent elections of 1800, 1824, and 1876 are not remotely analogous to 2020.

In the Supreme Court case of Wesberry v. Sanders, 376 U.S. 1 (1964), Justice Hugo Black emphasized the importance of the right to vote in a democracy:

No right is more precious in a free country than that of having a voice in the election of those who make the laws under which, as good citizens, we must live. Other rights, even the most basic, are illusory if the right to vote is undermined.

The Wesberry v. Sanders case was one of several decisions that developed the concept of “one person one vote”. Beginning with the case of Baker v. Carr (1962) and Reynolds v. Sims (1964), the Supreme Court recognized that all votes should carry the same weight when legislative districts are created following a decennial census. Of course, the United States Senate is constructed differently based on a constitutional compromise. Nevertheless, all elections are governed by the “one person one vote” directive. Throwing out millions of ballots, as courts were asked to do in 2020, would fly in the face of this bedrock principle.

2020 Election by the Numbers

In November of 2020 President-elect Biden received approximately 80 million votes, more than any presidential candidate in American history. Biden earned the highest margin of victory in a two-person race against a sitting president since Franklin D. Roosevelt was elected 1932. At the time of this post, Biden is on track to be awarded 306 electoral votes by the Electoral College, after winning the popular vote with a margin of more than seven million votes.

The elections of 1800 and 1824 are referred to as contingent elections because they were decided in the House of Representatives. The contested election of 1876 is unique because the outcome was decided by an Electoral Commission selected by Congress. In all three cases the election was thrown to an outgoing Congress (in 1801, 1825 and 1877) due to the inability of the Electoral College to award a “majority” of electoral votes to a single candidate. Each election is discussed below.

In 1800, Thomas Jefferson and Aaron Burr (Jefferson’s vice presidential running mate) received the same number of electoral college votes. Although Burr had agreed to run as Jefferson’s vice president, he did not concede the presidency when the electoral vote resulted in a 73 – 73 tie. The election was thus sent to the House, where ironically the “lame duck” Federalists were required to decide who would be the next president in the runoff between Jefferson and Burr.

Over the course of the next week, from February 11 to February 17, the House cast a total of 35 indecisive ballots. Each time, Jefferson received the votes of eight state delegations, but fell one vote short of the nine state threshold. Alexander Hamilton, the leader of the High Federalists, ultimately threw his support to Jefferson. In Hamilton’s mind, Jefferson was “by far not so dangerous a man” as Burr. This would contribute to their duel in 1804.

On the 36th ballot, the single Delaware Federalist representative switched to cast a blank ballot (along with other Federalists from Maryland and Vermont). As a result, Jefferson won 10 states, Burr won 4 states, and two states abstained. Click here for a discussion of the Election of 1800. 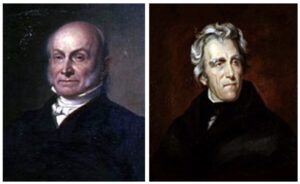 In 1824, the demise of the Federalist party resulted in four Democratic-Republican candidates running against each other in a splintered party. No single candidate obtained an absolute majority of the vote, which was largely divided by region. Andrew Jackson and John Quincy Adams split the mid-Atlantic states. Jackson and Henry Clay split the Western states. Jackson and William Crawford split the Southern states.

While Andrew Jackson had a plurality of the vote, the House awarded the Presidency to John Quincy Adams when Clay threw his support behind Adams. After taking office, President Adams appointed Henry Clay as Secretary of State, leading Jackson to famously accuse Adams of striking a “corrupt bargain” with Clay. Jackson would campaign on this rallying cry four years later when he defeated Adams in 1828. Jackson’s election in 1828 marked the end of the “Era of Good Feelings” and the ascendancy of Jackson’s new Democratic party which competed with the short lived Whig party. 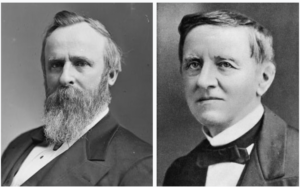 The third contingent election occurred following the Civil War. After President Grant declined to run for a third term, the Republicans nominated Ohio Governor, Rutherford B. Hayes. The Democrats selected New York Governor and reformer, Samuel J. Tilden. While both candidates were moderates who shared much in common, their parties engaged in widespread voter fraud in the hotly contested Presidential election of 1876.

Democrat James Tilden seemingly won the popular vote. He was leading with 184 electoral votes (to Hayes’ 163 votes), but remained one vote shy of the required 185 vote threshold. The votes in four states were challenged (Louisiana, Florida, South Carolina, and Oregon), with electors for both Tilden and Hayes claiming victory and submitting competing slates.

The House was controlled by Democrats and the Senate was controlled by Republicans. Due to allegations of voter fraud, in January of 1877, President Grant and Congress passed the Electoral Commission Act which set up a special, statutory electoral commission to resolve the dispute.

The unprecedented 15 member bipartisan commission was composed of 5 members of the House, 5 Senators, and 5 Supreme Court justices (with four Justices named in the Act to select a fifth justice). The Electoral Commission Act provided that the Commission’s recommendations were binding on the House and Senate. The commission announced its decision two days before the inauguration, certifying a vote of 8-7 along party lines to award all contested electoral votes to Hayes. As a result, Hayes won the disputed election, despite his loss of the popular vote.

Until the “Compromise of 1877” was finalized, the controversy dragged on for months. Ultimately, Southern Democrats agreed to support Hayes’ claim for the Presidency in return for increased funding for Southern internal improvements, withdrawal of federal troops, and an end to Reconstruction.

To end the constitutional crisis, on March 1, 1877, Speaker of the House Samuel Randall put country before party. Even though he was a Tilden loyalist, Randall refused to permit continued obstructionist maneuvers by his party. In the House’s so-called “stormiest” session Randall was forced to ask the sergeant-at-arms to restrain Democratic colleagues. Vermont was counted for Hayes as demanded by Republicans, and the voting process was finalized in the early hours on March 2.

The outcome of the Electoral Commission’s controversial decision is known as the Compromise of 1877, which returned the South to “local rule” with the removal of federal troops. This decision effectively ended the post-Civil War Reconstruction era, with horrible consequences for former slaves as Jim Crowe was permitted to descend upon the South.

Remedial Steps After Each Controversial Election

Among other things, the 12th Amendment revised the two vote per delegate procedure for the original Electoral College. After the 12th Amendment, each elector casts separate votes for president and vice president. If no presidential candidate receives a majority, the House selects from the top three candidates (instead of the top 5 as originally provided in 1787).

Similarly, the process of electing a president changed after the Election of 1824. To avoid a repeat of the controversies of the 1820s, the parties moved away from the Congressional Caucus system of nominating candidates. Under this problematic system, candidates were selected by informal caucuses of members of Congress. Among other concerns, the Congressional Caucus system raised separation of powers concerns when members of the legislative branch nominated the head of the executive branch.

In 1824, the nominee of the Republican congressional caucus, William H. Crawford, was not elected. But because no national system of concentrating support behind a particular candidate had replaced the caucus, no candidate in 1824 received a majority of electoral votes. The breakdown of the Congressional nominating caucus system marked the end of the “first American party system”. In 1832, the Jacksonian Democrats and the National Republicans held formal national nominating conventions.

In the aftermath of the disputed Election of 1876, Congress adopted the Electoral Count Act of 1887 to avoid a repeat of the Hays-Tilden election debacle a decade earlier. Among other things, the 1887 Act delegates to each state the “final determination” of any election disputes within the state, under specified circumstances. The century old Act, which remains in force today, is codified in 3 U.S. Code § 15.

The seven-section Electoral Count Act is officially known as “An Act to Fix the Day for the Meeting of the Electors of President and Vice-President, and to Provide for and Regulate the Counting of the Votes for President and Vice-President, and the Decision of Questions Arising Thereon.” Under the 809 word law, Presidential elections are subject to specified procedural requirements, deadlines, and objection procedures. Click here for a discussion of the Electoral Count Act of 1887.

The Electoral College timeline and procedures are codified in eighteen sections of the U.S. Code at 3 U.S.C. §§1-18, along with the Twelfth and Twentieth Amendments.

Prior to the adoption of the 20th Amendment, Congressional terms lasted until March 4. In 1933, the 20th Amendment moved the start date for Congress to January 3. As a result, contingent elections are now determined by the incoming Congress.

Breaking with its past practice of only discussing American history on this blog, Statuesandstories.com has decided to recognize the debt of gratitude that is owed to the selfless poll workers and volunteers who braved Covid in 2020. Historians will no doubt also record the names Aaron Van Langeveld, Chris Krebs, and Brad Raffensperger who were unbowed by political pressure, in many respects comparable to Speaker of the House Samuel Randall’s heroism in March of 1877.