Hamilton at the Philadelphia Convention

During the Revolutionary War Alexander Hamilton was one of the first to publicly recognize the need for a stronger federal government. As early as 1780 in a letter to James Duane, Hamilton began calling for a convention to address the flaws in the Articles of Confederation. For Hamilton, the fundamental defect was a “want of power in Congress” which rendered the Articles unequal to the prosecution of the war or “the preservation of the union in peace.” His Continentalist essays argued that America had drawn the wrong lessons from the war. Fear of political power was resulting in anarchy.

In the preface to his notes on the Convention, James Madison credits Hamilton with suggesting to Congress on April 1, 1783 that a “general” convention be held with the object to “strengthen the Federal Constitution.” While serving in Congress in 1782-1783, Hamilton and Madison were unsuccessful in their attempt to provide a revenue source for Congress with the adoption of a 5% impost tax. While the impost was approved by Congress, it failed to obtain unanimous support by all states required by the Articles of Confederation.

At the Annapolis Convention in September of 1786, Hamilton played a critical role with James Madison calling for the Constitutional Convention to be held the following year. Hamilton drafted the Annapolis Convention Address requesting the appointment of commissioners “to devise such further provisions as shall appear to them necessary to render the constitution of the Fœderal Government adequate to the exigencies of the Union,” beginning on the second Monday in May, 1787.

After the Philadelphia Convention concluded, Hamilton worked hard to secure the ratification of the Constitution. In addition to the drafting of the Federalist Papers, Hamilton played a leading role at the New York ratification convention. Yet, many historians have been puzzled by Alexander Hamilton’s “uneven” performance at the Constitutional Convention. For a partial explanation here is a discussion of the behind the scenes story of the New York delegation, which was purposely configured by Governor Clinton as a three member delegation to limit Hamilton’s effectiveness in Philadelphia.

According to historian Marie Hecht, Hamilton’s role in the convention was “bizarre and undistinguished.” She readily admits, however, that “he became the sun, moon and stars in the cause of ratification.” For Hecht, “[t]here is no more striking example in history of passionate commitment to a cause that its defender distrusted than Hamilton’s to the United States Constitution.”

Historian Forrest McDonald notes Hamilton’s “seemingly inconsistent conduct” in Philadelphia and observes that Hamilton “contributed little to the deliberations at the convention and did not even bother to attend much of the time.” Of course, McDonald concedes that Hamilton “performed herculean labors to bring about its ratification.”

Historian Clinton Rossiter rates Hamilton’s performance during the summer of 1787 as an “inexplicable disappointment.” For Rossiter, “the wide gap between the possible and the actual in Hamilton’s performance in Philadelphia comes as an unpleasant shock…” Hamilton biographer Broadus Mitchell is more generous indicating that Hamilton “was to find his greater triumph in making not a constitution, but a country.”

This blog post summarizes Hamilton’s involvement with the Philadelphia Convention. After reviewing Hamilton’s activities during the summer of 1787, this post theorizes that Alexander Hamilton may have played a larger role at the Convention than is generally accepted. After each event on the timeline, the relevance for the Hamilton Authorship Thesis (HAT) is described.

Possible significance for the Hamilton Authorship Thesis: Did Hamilton prepare the Cover Letter anticipating that the Society of the Cincinnati could assist with the public relations campaign that would be required to obtain ratification?

Had the deliberations been open while going on, the clamours of faction would have prevented any satisfactory result. Had they been afterwards disclosed, much food would have been afforded to inflammatory declamation. Propositions made without due reflection, and perhaps abandoned by the proposers themselves, on more mature reflection, would have been handles for a profusion of il-natured accusation.

Possible significance for the Hamilton Authorship Thesis: Did the Convention’s secrecy rules enable Hamilton to conceal his identity as the draftsman of the Cover Letter? The HAT Thesis theorizes that Hamilton had more to gain than any other delegate from the symbolic “Washington” signature on the Cover Letter.

June 18, 1787 – Hamilton’s all day speech: Hamilton gave a day long speech which was the only address of its kind at the Convention. Click here for a link to Hamilton’s June 18 speech and here for a link to Hamilton’s notes. Among other things Hamilton’s June 18 speech argued that both the New Jersey Plan and the Virginia Plan were inadequate. Hamilton offered his own plan, which may have made the Virginia Plan appear more moderate by comparison.

July 3, 1787 – Letter to Washington: Hamilton wrote to George Washington expressing the fear that a “golden opportunity” was slipping away. Hamilton explained that “of necessity” he needed to remain in New York for another ten or twelve days but would return to Philadelphia if doing so would not be a “mere waste of time.” Click here for a link to Hamilton’s letter to Washington.

Possible significance for the Hamilton Authorship Thesis: Among other things, Washington’s July 10 letter demonstrates that Hamilton and Washington were sharing their views and may have been coordinating during the Convention. The HAT Thesis suggests that one of the reasons why Hamilton returned was to write the Cover Letter with Washington’s signature, in the event that the Convention succeeded in agreeing on a new Constitution. 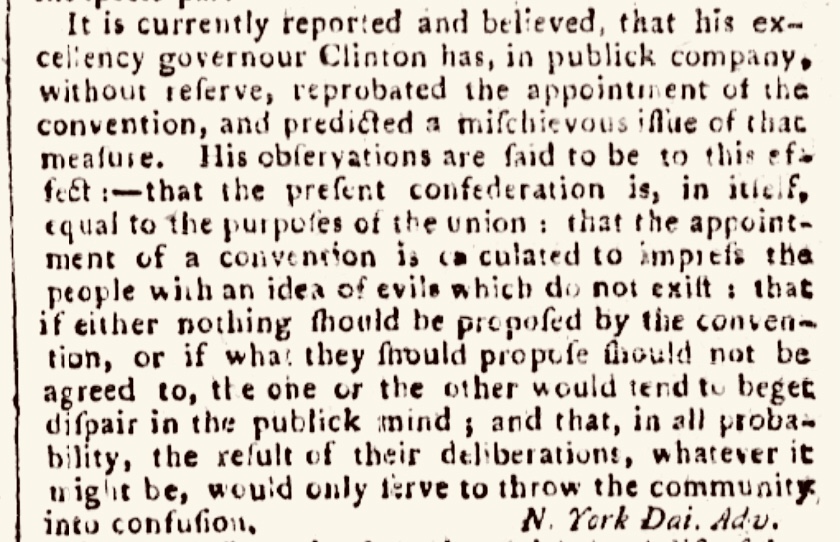 July 21, 1787 – Letter to NY Daily Advertiser:  After having departed the Convention to attend to business in New York, Hamilton wrote a highly critical letter attacking New York Governor George Clinton for pre-judging the work of the Constitutional Convention, which was still meeting in Philadelphia. Click here for a link to Hamilton’s  letter published in the NY Daily Advertiser.

September 8, 1787 – Appointed to Committee on Style: On September 8 Hamilton is appointed to the Committee on Style and Arrangement, which was responsible for the final “polish” and arrangement of the Constitution. Many historians have commented that it was “surprising” that Hamilton was selected for this final committee since he had been absent from Philadelphia more than he was present. At least one historian has suggested that it was “shocking” that Hamilton was named to this committee given his attendance. Click here for a link to Madison’s notes on September 8.

September 8, 1787 – Hamilton’s letter to to Duche: In a letter intended to be shared with the Marquis de Lafayette dated September 8, Hamilton predicted that “there is every reason to believe that if the new Constitution is adopted his friend General Washington will be the Chief.” Click here for a link to Hamilton’s letter to Mr. Duche which is held in the archives of the French Foreign Ministry, Consular Correspondence.

Possible significance for the Hamilton Authorship Thesis: Was it a coincidence that the same day that Hamilton is appointed to the Committee on Style he makes this prediction in a letter that potentially violates the rules of secrecy of the Convention? The HAT Thesis suggests that after being selected for the Committee on Style Hamilton knows that he will be able to draft the Cover Letter for Washington’s signature. If the HAT is correct, perhaps Hamilton already prepared a draft letter which he discussed with his co-Committee members on September 8. 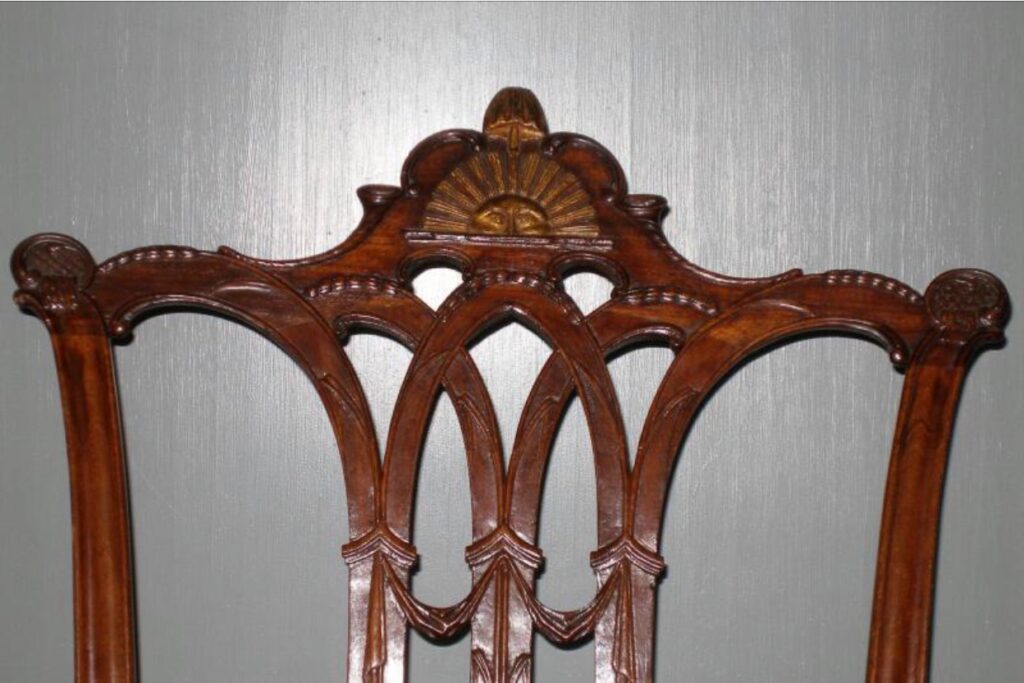 September 17, 1787 – Hamilton urges all delegates to sign: On the final day of the Convention, Hamilton observed that nobody’s ideas were “more remote” from the Constitution “than his own were known to be…” Nevertheless, Hamilton noted that, “[a] few characters of consequence, by opposing or even refusing to sign the Constitution, might do infinite mischief by kindling latent sparks which luck under an enthusiasm in favor of the convention which may soon subside.” In attempting to convince all delegates to sign, Hamilton explained that “it is possible to deliberate between anarchy and convulsion on one side, and the chance of good to be expected from the plan on the other.” Click here for a link to Madison’s notes for September 17.

Other dates that are relevant to the Hamilton Authorship Thesis

May 25, 1787 – Hamilton nominates Jackson as Convention Secretary: On the first day of the Convention, Hamilton nominated Major William Jackson for the job of Secretary. Jackson would be selected over Benjamin Franklin’s grandson, William Temple Franklin. Jackson was a member of the Society of the Cincinnati and had served on Washington’s staff during the war. His duties as Convention Secretary included  maintaining secrecy of Convention proceedings, preparing the Convention Journal, destroying unwanted records at the conclusion of the Convention, and delivering the Constitution’s “plan” (which included the engrossed Constitution, Cover Letter and Resolutions) to Congress on September 20. Click here for a link to Madison’s notes on May 25.

September 8 or September 10 – Pinkney’s motion for an Address: According to Madison’s notes on September 10, Charles Pinkney moved that an Address be prepared to the People, to accompany the Constitution. James McHenry also kept notes at the Convention. McHenry’s notes seemingly conflict with Madison’s notes, suggesting that this motion was made two days earlier on September 8:

Click here for a link to Madison’s notes on September 10:

Mr. PINKNEY moved “that it be an instruction to the Committee for revising the stile and arrangement of the articles agreed on, to prepare an Address to the People, to accompany the present Constitution, and to be laid with the same before the U. States in Congress.”

Click here for a link to McHenry’s notes on September 8:

Agreed to the whole report with some amendments-and refered the printed paper etc to a committee of 5 to revise and place the several parts under their proper heads-with an instruction to bring in draught of a letter to Congress.

If McHenry is correct that a letter or “address” was discussed on September 8 (whether or not a motion was made on this date) this would strengthen the HAT Thesis that a reason for Hamilton’s appointment to the Committee was to prepare the letter. This possibility dovetails with Hamilton’s letter of September 8 predicting to Lafayette that Washington would be “chief.”

August 20 and August 28, 1787 – Hamilton’s letters to King: While in New York Hamilton wrote to Rufus King on August 20 requesting that he be notified when the conclusion of the Convention is at hand, “for I would chose to be present at that time.” A week later on August 27 Hamilton again requested to be notified “as I intended to be with you, for certain reasons, before the conclusion.” While Hamilton is cryptic in the August 28th letter, the HAT Thesis suggests that one of Hamilton’s reasons was to draft a Cover Letter for Washington’s signature, which would send the symbolic message that Washington supported the Constitution and would be willing to serve as President.

Mr. KING suggested that the Journals of the Convention should be either destroyed, or deposited in the custody of the President. He thought if suffered to be made public, a bad use would be made of them by those who would wish to prevent the adoption of the Constitution.