Among the 44 items in the collection pictured below are: 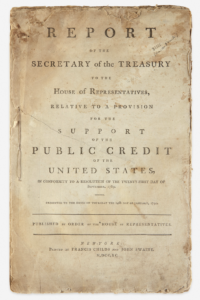 Report of the Secretary of the Treasury to the House of Representatives, Relative to a Provision for the Support of the Public Credit of the United States, dated January 14, 1790 (Image Courtesy of Freeman’s) 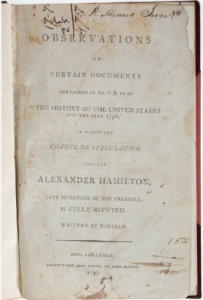 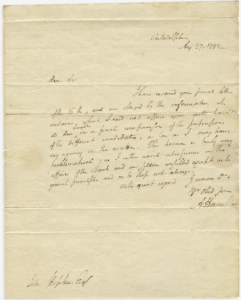 Letter signed and written by Hamilton as the first United States Secretary of the Treasury to John Hopkins, Loan Officer for the State of Virginia, refuting any impropriety or improper influence over the First Bank of the United States (Image Courtesy of Freeman’s) 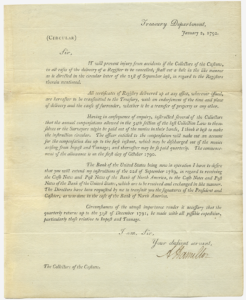 Printed Treasury Department Circular, issued and signed by Alexander Hamilton as first Secretary of the Treasury, to the Collectors of the Customs (Image Courtesy of Freeman’s) 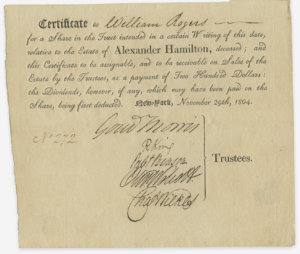 Hamilton’s finances upon his death

Hamilton tragically died on July 11, 1804 following a duel with Aaron Burr. At the time of his death, Hamilton’s debts exceeded his assets after a career of public service. Hamilton’s close friend and colleague, Gouverneur Morris, summarized Hamilton’s finances in a letter to Rufus King, another of Hamilton’s friends:

Our friend Hamilton has been suddenly cut off in the midst of embarrassments which would have required years of professional industry to set straight – a debt of between 50,000 and 60,000 dollars hanging over him, a property which in time may sell for 70,000 or 80,000, but which, if brought to the hammer, would not, in all probabilty, fethch 40,000.”

Gouverneur Morris, who gave the eulogy at Hamilton’s funeral, secretly raised approximately $80,000 from over 100 of Hamilton’s friends. Other New England friends donated land in Pennsylvania, all of which was concealed from the Hamilton children for a generation.

Hamilton’s executors, John Church (Angelica’s husband), Nicholas Fish, and Nathaniel Pendleton put the Hamilton Grange for sale at auction to pay off creditors. They purchased the Grange for $30,000, but sold it back to Eliza for $15,000, enabling her to remain in the cherished family homestead.  The certificate of trust shares pictured above was the means used by Hamilton’s colleagues to assist the Hamilton family following Alexander’s early demise. Click here for a link to a discussion of Hamilton’s finanances and Eliza Hamilton’s pension.

John E. Herzog is the founder and Chairman Emeritus of the Museum of American Finance in Manhattan. Following a successful career as a Wall Street CEO, Herzog now serves as a member of the Board of Overseers at NYU’s Stern School of Business and the Honary Chair of the Alexander Hamilton Awareness Society.