“Incitement of Insurrection” and the Second Confiscation Act of 1862

An Act to suppress Insurrection, to punish Treason and Rebellion, to seize and confiscate the Property of Rebels, and for other Purposes

Following the January 6, 2021 assault on the Capitol, a House Resolution was prepared containing a single Article of Impeachment against President Donald T. Trump: ARTICLE I: INCITEMENT OF INSURRECTION. Click here for a link to the Impeachment Resolution.

Among other things, the concise four page Resolution alleges that during his January 6 rally, President Trump “willfully made statements that encouraged – and foreseeably resulted in – imminent lawless action at the Capital.” The Resolution further alleges that “[i]ncited by President Trump, a mob unlawfully breached the Capitol, injured law enforcement personnel, menaced Members of Congress and the Vice President, interfered with the Joint Session’s solemn constitutional duty to certify election results, and engaged in violent, destructive, and seditious acts.”

The federal crime of insurrection is a felony punishable by up to ten years of imprisonment. “Rebellion or Insurrection” is defined in 18 U.S.C. §2383 of the United States Code as follows:

Whoever incites, sets on foot, assists, or engages in any rebellion or insurrection against the authority of the United States or the laws thereof, or gives aid or comfort thereto, shall be fined under this title or imprisoned not more than ten years, or both; and shall be incapable of holding any office under the United States.

Section 2383 is part of a suit of offenses (Treason, Sedition and Subversive Activities) codified in Chapter 115 of Title 18 of the United State Code. For example, the crime of seditious conspiracy is contained in 18 U.S.C. §2384; the crime of treason is set forth in 18 U.S.C. §2381. Some of these crimes date back to the Crimes Act of 1790, which enacted the first Federal criminal laws adopted by the First Congress. While the nation’s first Federal offenses were adopted in 1790, the crime of insurrection in Section 2381 dates back to Abraham Lincoln and the Civil War. 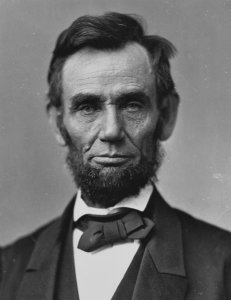 Insurrection under the Second Confiscation Act of 1862

During the bleakest days of the Civil War, the Thirty-Seventh Congress enacted the Second Confiscation Act on July 17, 1862. Formally know as “An Act to suppress Insurrection, to punish Treason and Rebellion, to seize and confiscate the Property of Rebels, and for other Purposes,” the 1862 Act was an effort to expand the tools available to President Lincoln to help win the Civil War. The 1862 Act was also a step forward in the effort for universal emancipation and abolition of slavery.

Section 2 of the Confiscation Act of 1862 is pictured below. It is substantially similar to 18 U.S.C. §2383, with only minor revisions adopted in 1948 and 1994. The marginal notations contained in the 1862 Act label Section 2 as “Engaging or assisting &c., in rebellion against the United States, how punished”:

Click here for a link to the Act, which contains 14 sections. The first section of the Act declared that anyone adjudged guilty of treason “shall suffer death and his slaves, if any, shall be declared and made free…” Section 3 provided that every person guilty of insurrection “shall be forever incapable and disqualified to hold any office under the United States.” Six years later, Section 3 of the Fourteenth Amendment would similarly bar from public office any person who took an oath of office to support the Constitution who engaged in insurrection or rebellion against the United States.

Complementing the law’s criminal provisions, the civil provisions of the Act focused on confiscation of property as a way to hasten the end of the war. Section 13 authorized the President to grant pardons and amnesty as he may deem expedient. Section 14 provided that the court shall have the full power to initiate proceedings and do all other things necessary to carry out the Act.

When the Senate met in extraordinary session during the summer of 1861, it enacted the Confiscation Act of 1861 as one of the wartime measures  intended to provide President Lincoln with tools to win the Civil War. Congress was jolted into action following the Union defeat at the First Battle of Bull Run. Otherwise known as the First Confiscation Act, the 1861 Act authorized the federal government to seize property, including slaves, used to support the Confederate rebellion. 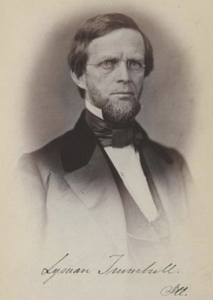 President Lincoln threatened to veto the law based on a concern about the law’s constitutionality.  The bill was revised on July 16 and signed into law by Lincoln the following day.  Along with the Second Confiscation Act, Congress also adopted the Militia Act of 1862 , which were both signed by President Lincoln on July 17.

The final compromise bill authorized the federal government to free slaves in rebel territory and prohibited the return of fugitive slaves. The 1862 Act also allowed the Union army to recruit African American soldiers. After the law was enacted, Lincoln issued what would be called a presidential signing statement. Lincoln also began making plans to proceed with his own emancipation policy, which would be presented as a first draft (the “Preliminary Emancipation Proclamation“) to his Cabinet on July 22, 1862. Lincoln issued the Emancipation Proclamation on January 1, 1863 after announcing on September 22, 1862 that if the Confederacy did not rejoin the Union all slaves in rebellious states would be freed.

Although more aggressive than the first act, both Confiscation Acts lacked enforcement capabilities and were only marginally successful. President Lincoln’s Emancipation Proclamation eventually rendered the acts superfluous by liberating all slaves within Confederate states regardless of the allegiance of their owners. Nevertheless, the Confiscation Act of 1862 remains a significant, if under-appreciated, step in the abolition of slavery by President Lincoln. The crime of insurrection created by the Second Insurrection Act remains in place today in 18 U.S.C. §2383. 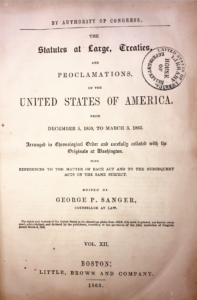