While the Hamilton Papers at the Library of Congress are voluminous, they are far from complete. As is not uncommon with manuscript collections, papers can be damaged, mislain, purposely destroyed or lost. Or, it may be difficult to categorize fragmentary drafts which cannot be connected to any other papers in a collection. “Page 13” in Box 35, Reel 29 of the Hamilton Papers is a perfect example. Grouped with other orphaned legal files, Page 13 is a single fragmentary page labeled “Morrisania Claim & Papers.” As described below, a longstanding mystery about Page 13 has now been solved.

Although Page 13 is undated and does not connect to any other pages in the Hamilton Papers, all is not lost. It has been long known that “Morrisania” is the name of the estate of Hamilton’s close friend, Gouverneur Morris. By comparing Page 13 to texts in the Gouverneur Morris Papers at Columbia University and the Loyalist Papers at the University of New Brunswick it can now be authoritatively concluded that Alexander Hamilton assisted the Morris family in a multi-year effort to obtain relief from London for damages to the Morrisania estate.

This investigation has also located the missing “pages 1 to 12” from the full, final version of the Morrisania Claim. Connecting the dots, it can now be conclusively established that Page 13 was a loose page of the preliminary draft, the final version of which was filed with the British authorities. Moreover, by tying together previously disconnected Morrisania files it becomes clear that attorney Alexander Hamilton had a longstanding professional relationship with Gouverneur Morris. Importantly, the evidence suggests that collaboration between Hamilton and Morris on the Morrisania file continued from 1783 through April of 1787, into the weeks preceding their arrival at the Constitutional Convention.

This blog post – Part I – is the first of a multi-part series summarizing the story of how the orphaned Page 13 can readily be connected to the Papers of Gouverneur Morris at Columbia University and the extensive Loyalist Collection in New Brunswick. Interestingly, this investigation also resulted in several unexpected discoveries:

While biographers of Gouverneur Morris have noted the protracted litigation over the Morrisania estate, the following new details have never before been revealed:

This post will continue in Part 2 with a discussion of the arbitration award by Clinton and Schuyler dated 3 March 1787. Part 2 will also explore the legal maneuvering that enabled Gouverneur Morris to purchase of the Morrisania estate. The long delayed acquisition of Morrisania occurred in connection with the settlement of litigation originally brought by Gouverneur Morris’ half-brother, Richard Morris, against Gouverneur Morris’ mother, Sarah Morris. Biographer, James Kirschke describes Gouverneur Morris’ purchase of Morriania as “absurdly complicated,” involving multiple moving parts, loans and transactions. After years of delay, Morris finally acquired title to Morrisania in April of 1787. Part 3 (pending) will identify as yet unanswered questions which are raised by these discoveries.

The papers of Gouverneur Morris are held at the Library of Congress (5.9 linear feet held in 25 containers) and at Columbia University (23 boxes). Of course, additional Hamilton and Morris papers are owned by private collectors or are held by other institutions, including the New York Public Library and the New York Historical Society.

The Loyalist Collection holds primary documents, published on microfilm and in digital formats, focusing and relative to the lives and times of American loyalists of the American Revolution (1775-1783), including years leading up to the conflict and post-war resettlement. This is a special collection of British, North American and West Indies Colonial, and early Canadian sources from approx. 1750-1850.

Hamilton’s legal files at the Library of Congress include agreements, affidavits, legal briefs, client financial papers, contracts, memoranda, and notes. Where possible, files are organized alphabetically by case or client name. Other material is arranged topically, including legal opinions by Hamilton, powers of attorney, wills and legacies. Page 13 is housed in Box 35, reel 29, together with eleven other fragmentary files which the Library of Congress catalogues as “Other legal papers; Fragments.” Click here for a link to Page 13 (Image 7 of 12). As described below, Page 13 is no longer an orphan.

It is immediately evident from Page 13 that it is part of a larger document. In the two and a half paragraphs on the page, Hamilton made more than a dozen edits. This suggests that Page 13 was an early draft. But a draft of what? Page 13 is copied below, along with the corresponding – and virtually identical – page from the Morris Papers at Columbia. The only substantive difference between the two documents is that the edits on Page 13 from the Hamilton Papers (left side) were incorporated into the final draft in the Morris Papers (right side).

The first full paragraph on Page 13 (left side) is copied below, along with the corresponding paragraph in the Morris Papers (right side).

Perhaps the biggest clue is contained in the bottom paragraph which refers to the “Claimant and those interested in the Morrisania Estate…” By connecting the dots between the Hamilton and Morris Papers and the Loyalist Collection, we now know that the “Claimant” was Sarah Morris. She was replaced by her step-son, Staats Long Morris, upon her death in January of 1786. The Board is the “Board of Claims” appointed to hear loyalist claims following the American Revolutionary War. Based on a notation on the full thirteen-page document at Columbia, we can authoritatively conclude that Page 13 was a draft of “The Morrisania Claim on the British Govt for Cattle & Wood” filed with the Board of Claim on or about 18 October 1783.

The same text appears in the Loyalist Collection. A copy of the “Report of the Commissioners on the Claim of Mrs. Sarah Morris of Morrisania for Supplies to the Army No. 351” is set forth below (the “Report”). The full “Morrisania Claim” at Columbia is quoted at length in the Report in the Loyalist Collection, including the identical text from orphaned Page 13 at the Library of Congress. Note that the Report was dated 2 March 1784. This begs the question of why the damages claims were not paid out until 1789. The protracted Morrisania Claim, along with a discussion of the complex litigation involving the Morrisania Estate will be discussed in Part II (pending). An engraving of the Morrisania mansion is also copied below. 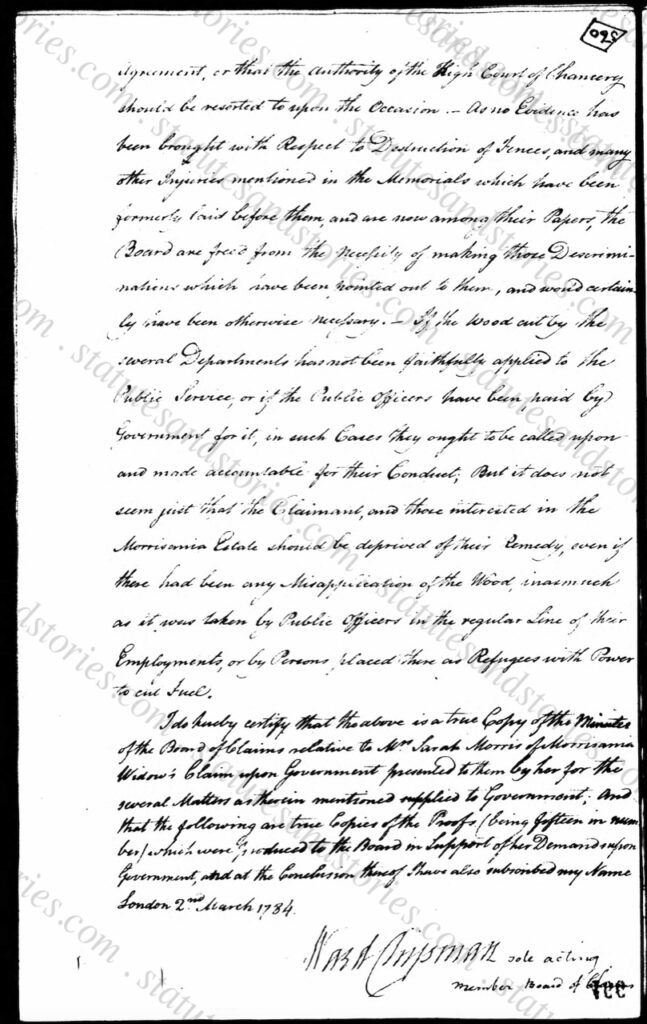 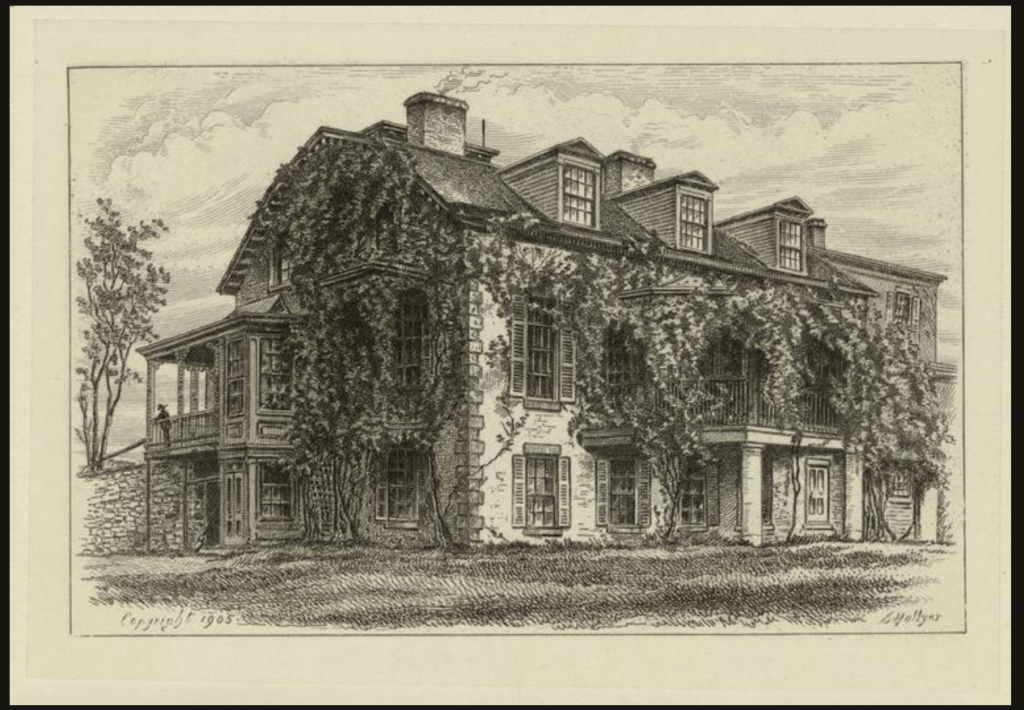 In hindsight it is not surprising that Hamilton would have represented loyalists in the Morris family. Despite the fact that doing so was politically unpopular, Alexander Hamilton did not shy away from representing loyalists seeking to reclaim seized property. Hamilton may also have believed these families, and their financial capital, would prove critical for re-building the United States after the war. He also wisely wanted to facilitate post war re-integration within American society. Hamilton correctly recognized that peacefully resolving property disputes was an important step in enabling a successful transition to civil society and the rule of law.

For a discussion of Hamilton’s representation of loyalists click here. Click here for a PowerPoint presented to the National Conference on History Education in 2021: Reconciling Patriot Versus Loyalist Communities Following the Revolutionary War: Attorney Alexander Hamilton’s Representation of Loyalists and Hamilton’s Phocion Essays.

This post continues in Part 2 with a discussion of the arbitration award by Clinton and Schuyler dated 3 March 1787. Part 2 will also explore the legal maneuvering that enabled Gouverneur Morris’ purchase of the Morrisania estate.