Miss Dally’s Boarding House: The forgotten location where the Constitution was “drafted”

Until recently the location where the Preamble to the U.S. Constitution was written was an unsolved mystery. For decades historians have suspected that Gouverneur Morris boarded with Miss Dally during the summer of 1787, but researchers lacked proof. As recently announced by StatutesandStories.com, we now have confirmation that Gouverneur Morris was in fact boarding with Miss Mary Dally at 311 Market Street in Philadelphia. But who was Mary Dally? What else can be learned about the location where Gouverneur Morris wrote the penultimate draft of the Constitution? Even though records are scarce, Miss Dally has a fascinating story to tell.

This blog post – Mystery Solved Part II – is based on a wide-ranging investigation of Gouverneur Morris’ papers, financial records and correspondence located at the Library of Congress, the Morris Papers at Columbia University and other archives.

After they resigned from office in 1784, Gouverneur continued working with Robert Morris in Philadelphia. During this period Gouverneur was a confirmed bachelor. He did not get married until 1809 at the age of 57. As described in Part I there is no evidence that Gouverneur Morris ever owned property in Philadephia. Gouverneur Morris continued boarding with Miss Dally from 1782 to 1787, when he wasn’t traveling on business for Robert Morris, or visiting his Morrisania estate that Gouverneur acquired in April of 1787.

This blog post – Part II – focuses on Miss Dally and her largely forgotten boarding house. As set forth below, it is now possible to paint a more detailed picture about Miss Dally and her sister, Mrs. Clarke. Part II uses correspondence between delegates at the Constitutional Convention, newspaper ads by Miss Dally, memoirs, and diaries to piece together their story.

Because Miss Dally and her sister, Mrs. Clarke, had operated their boarding house(s) for over a decade, their names repeatedly appear in the correspondence between members of Congress. In fact, during the Revolutionary War Miss Dally’s lodging house was appropriately referred to by Congressman William Whipple as “Liberty Hall.”

Part III (pending) identifies unanswered questions for further research. For example, who else boarded with Miss Dally in 1787? What other taverns, lodging houses and businesses were located near Miss Dally’s? It is possible to locate receipts or other records which might help flesh out Gouverneur Morris’ work with the Committee on Style between September 8th to September 12? Can the precise spot where Miss Dally’s boarding house was located be determined using old Philadelphia maps?

Beginning in 1778 Miss Dally’s name (with alternate spellings) begins appearing in the correspondence and diaries of Massachusetts delegates to the Continental Congress. On July 23, 1778, delegate Samuel Holten recorded in his diary that:

I removed from Wido(w) Robbinson’s to board at the house of Miss Dolley and Clark in 2s Street.

Sam Adams, the firebrand revolutionary, also knew Miss Dally. While residing with Miss Dally, Sam Adams wrote to his wife Betsy on December 13, 1778 indicating that Miss Daily and her sister sent their regards. According to Adams’ letter sent from Philadelphia:

Miss Clark and her Sister Miss Daily in whose house the Massachusetts Delegates are agreeably scituated present their respectful Compliments to you.

In 1776, the British evacuated Boston after General George Washington was able to successfully place cannons on the strategic high ground of Dorchester Heights.  After relocating from Boston the British captured Manhattan during the Battle of Brooklyn. New York served as their base of operations for the balance of the war.

Yet, the revolutionary “Spirit of 1776” began in Boston, the site of the first battles of the war. Not surprisingly, the Massachussetts delegates to Congress were ardent patriots. In an under-appreciated letter from Philadelphia dated 8 November 1778, New Hampshire delegate William Whipple wrote to his friend, Virginia delegate Richard Henry Lee. As recorded in Richard Henry Lee’s memoirs, Whipple described his arrival in Philadelphia:

My Dear Sir – On my arrival here…I had the pleasure of receving your your [letter]….I have taken up my quarters at Liberty Hall, where you know there is a set well agreed in political sentiments….

Whipple wrote that he anticipated “the pleasure of some long winter evening, when, with a social pipe and friendly glass” Lee and other colleagues returned “to our little circle.”  The name “Miss Dalley” appears again in correspondence between Massachusetts delegates James Lovell and Elbridge Gerry in February of 1781.

Pictured below is a map of central Philadelphia in 1776. Independence Hall (then known as the State House) is located in the top right corner of the map. The Delaware River is shown at the bottom of the map. Miss Dally’s boarding house is believed to have been located on the north side of Market Street between 2nd and 3rd. Market Street runs east – west, with the numbered streets running north – south. 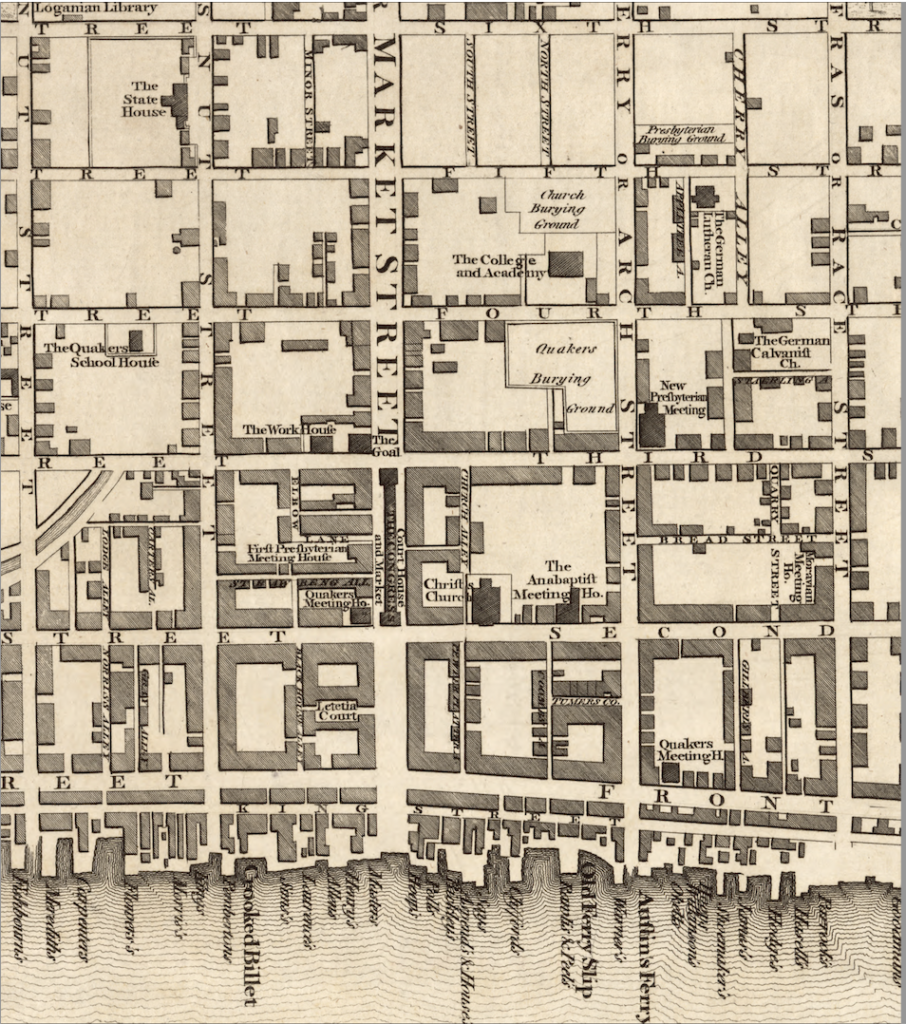 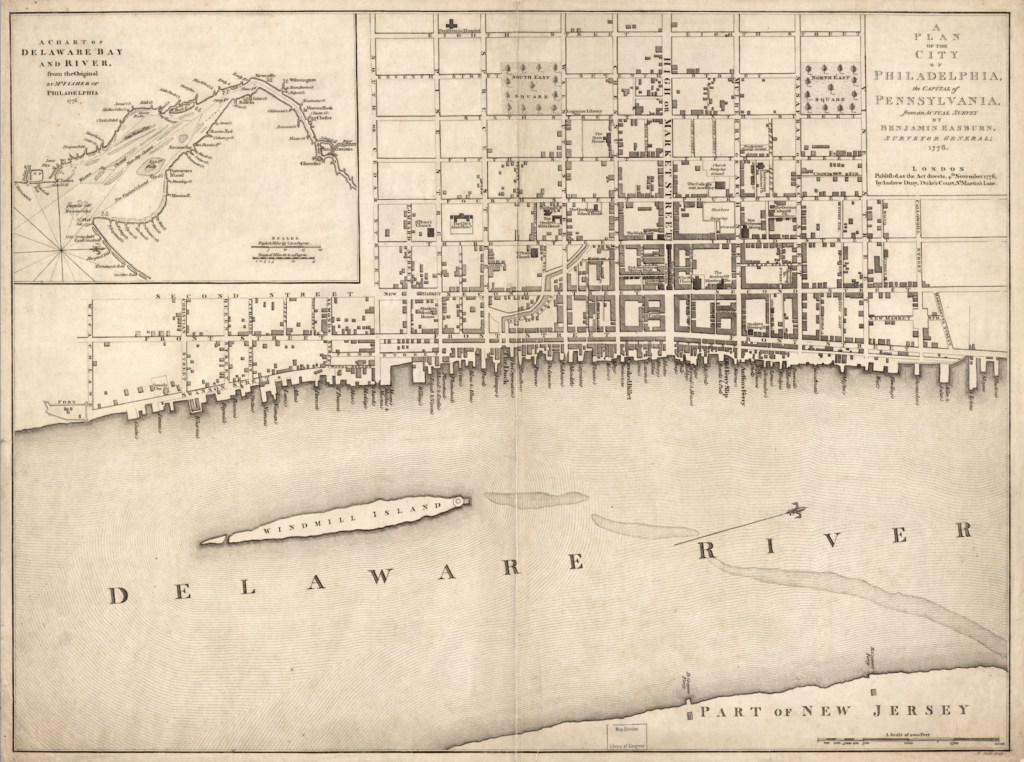 To walk from Miss Dally’s to Independence Hall, a Congressional delegate in 1778 (or a member of the Constitutional Convention in 1787) would walk two blocks west on Market and turn left to walk two blocks south on Fifth Street to Independence Hall. While walking west on Market one would pass Benjamin Franklin’s home, the Indian Queen boarding house, and Mary House’s boarding house (where James Madison and most of the Virginia delegation boarded). George Washington resided at Robert Morris’ mansion during the summer of 1787. Robert Morris’ mansion was located on the south side of Market Street between 5th and 6th, on the same block as Mary House’s boarding house.

Perhaps the most instructive letters sent from Miss Dally’s were written by Elbridge Gerry to his young wife, Ann. Gerry served as a Massachusetts delegate in the Continental Congress from 1776 to 1780. He would later become Vice President under Jefferson. It appears that Gerry and the other Massachusetts delegates were sufficiently satisfied with their housing arrangements at Miss Dally’s that they kept returning.

Gerry was also a delegate to the Constitutional Convention. By letter dated 9 August 1787 Gerry informed his wife that “I arrived here [in Philadelphia]…about an hour ago with Colo. Hamilton.” According to Gerry, he and Colo Hamilton “are both at Miss Dally’s.” It makes sense that Hamilton would board at Miss Dally’s. Hamilton and Gouverneur Morris were both close friends. In September they would both serve together on the Committee on Style and arrangement which was tasked with preparing the final draft of the Constitution.

Gerry’s detailed letters written during the Constitutional Convention are suggestive of the range of Miss Dally’s talents. The letter assumes that Ann was already familiar with Miss Dally, when Gerry explains that “Miss Dally informs me she has some very good Hyson [tea for sale]….. at a Dollar and a half by the half Dozen.” Gerry enclosed a sample and explained that “Miss Dally thinks it more difficult to preserve the Flavour of Hyson than of the black Tea.”

From this letter one can infer that Miss Dally had diversified beyond merely providing room and board and was now selling imported tea. This conclusion is further supported by a newspaper ad pictured below from “Mary Dalley,” indicating that she “just opened” her new tea shop in June of 1789. The ad began appearing in several Philadephia papers two years after the Constitutional Convention. In an ad in the Pennsylvania Packet Miss Dally lists her address as “opposite the Indian King, in Market, near Third Street.” It is unclear whether she was selling tea from her boarding house, or a nearby storefront.

Assuming that “Miss Dalley” was selling tea from her boarding house, the ad suggests that another famous boarding house, the Indian King, was located across the street from Miss Dally’s. The importation of several varieties of tea from China suggests a growing international trade in Philadelphia. If so, Miss Dally could be described as an entrepreneur who preceded Starbucks. Miss Dally may also have been involved with currency trading in the 1780s.

During the final month of the Constitutional Convention Gerry wrote his wife on September 1, 1787. It is clear by the final month of the Convention that Gerry was not pleased with the deliberations at Independence Hall. In his letter Gerry agreed that the Articles of Confederation was an “arbitrary System of Government.” Nonetheless, he wanted “considerable alterations” to the draft Consitution and explains that he was only staying in Philadelphia to prevent his colleagues from “saying that he broke up the representation.” Gerry would be one of only three delegates in attendance on September 17th who refused to sign the Constitution.

Gerry’s September 1st letter is also useful because it provides additional information about Miss Dally. Gerry indicates that he would ask Miss Dally to “look out for” some silk for a suit. Miss Dally’s expertise with silk is not surprising because she may also have been a taylor.

Pictured below are images from Francis White’s Philadelphia directory published in 1785. It is noteworthy that Miss Dally is listed as a “taylor.” Her sister, Mrs. Clark, is described as operating a “boarding house.” The same location – Market Street between Second and Third – is listed as the address for “Dally Mary,” “Clark Mrs.” and “Morris Governeur.”

Years later, in 1795, advertisements appear in Philadelphia papers indicating that a “Mrs. Daley” was educating young ladies at the Bordenton Academy. The newspaper announcements “respectfully” acquainted the public that she “continues” to educate “Young Ladies” and promised that “the strictest care is taken of their morals,” while “all possible attention” would be paid to “the different branches of education.” After having interacted with Congressional delegates from around the nation for approximately two decades, it makes sense that Miss Dally would become an educator.

It is no coincidence that Miss Dally became an innkeeper. Her father, Gifford Dally/Daley/Dalley, was also a boarding house/tavern operator. In the 1780s Gifford Dally operated the famous City Tavern on Second Street as the “keeper.” This also explains why Mary Dally’s sister, Mrs. Clark, was also in the boarding business.

Pictured below are newspaper reports and advertisements involving Gifford Dally in 1778, 1783 and 1794. The only thing consistent about the spelling of Gifford Dally’s name is that it was inconsistent: Daley/Dalley/Dally.

In the early 1790s Gifford Dally was the door-keeper for Congress. For example, the Federal Gazette reported on 3 March 1791 that Gifford Dally was directed to “take the care of the rooms appropriated for the use of the House of Representatives” between sessions of Congress and to “make the necessary provision for fire wood.”

Reflecting the fact that Gifford Dally worked with several hospitality-related businesses over time, copied below is an advertisement for Dally’s hotel. It is unclear whether Miss Dally or her sister assisted their father at their father’s hotel on Shippen Street between 3rd and 4th Street. It would not be surprising, however, if the family worked together. Gifford Dally’s advertisement for Dally’s hotel boasted of his “long experience in the business” and that the Dally Hotel furnished the best liquors and the “best provision the markets will afford, at any hour, on the shortest notice.”

Philadelphia was ravaged by several Yellow Fever outbreaks in the 1790s. By working with the public – and travelers from out of town – there is no doubt that Miss Dally was at risk of exposure. Although it is very difficult to read, a death notice in the Porcupine Gazette suggests that “Miss Kitty Dally,” the “daughter of the late Gifford Dally”, died of Yellow Fever in 1798. It is likely that “Kitty” was either Mary Dally, or one of her sisters? 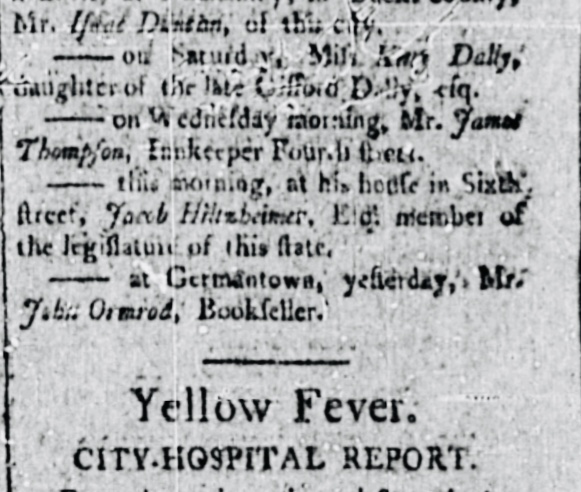 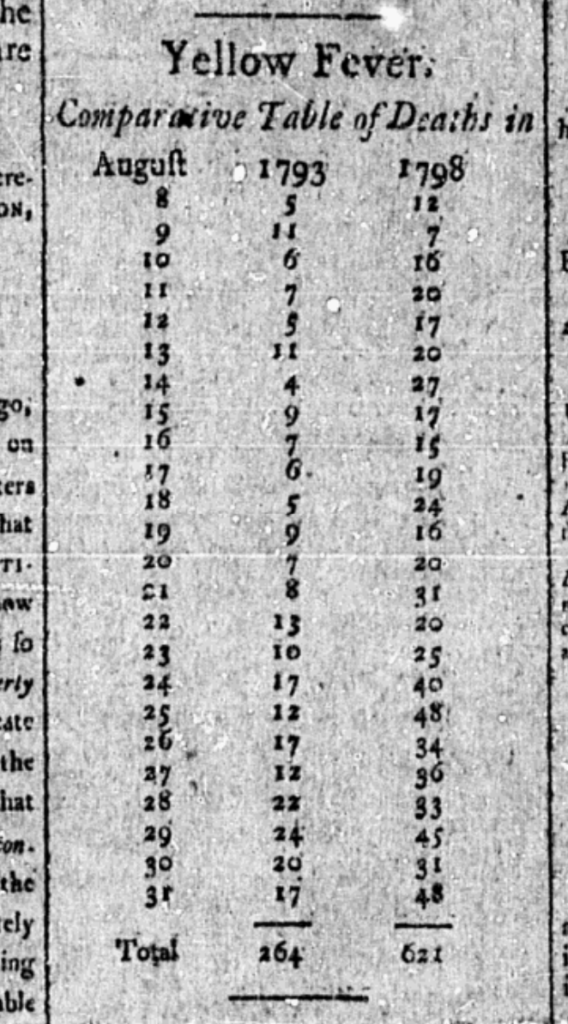 Statutesandstories.com is hopeful that a historic marker can be placed at the appropriate location in Philadephia to honor Miss Dally and the site where Gouverneur Morris drafted the Preamble. Feel free to reach out by email for more information.

This post continues in Part III (pending) which explores research questions about Miss Dally, Gouverneur Morris, and the drafting of the Constitution during the summer of 1787.