Why would Hamilton have taken a loan from Governor Clinton?

Warning: the following information is hot off the presses and has not been analyzed. Please also excuse any typos as this is being written on the fly. I am nonetheless posting these images on the internet at the request of a well respected Hamilton scholar, Michael Newton. I welcome the input and insights of esteemed colleagues. I also look forward to discussing same with my hero, Professor John Kaminski, and plan to update this post accordingly in the near future.

The images below were photographed by my colleague Sergio Villavicenio who carefully took high resolution pictures of journals, ledgers and registers in the New York State Archives in connection with ongoing research on our documentary about the Constitution’s Cover Letter. To learn more about our Cover Letter research and the Hamilton Authorship Thesis (HAT), click here and here. To learn more about  our pending Cover Letter documentary, click here to visit www.TheCoverLetter.org. 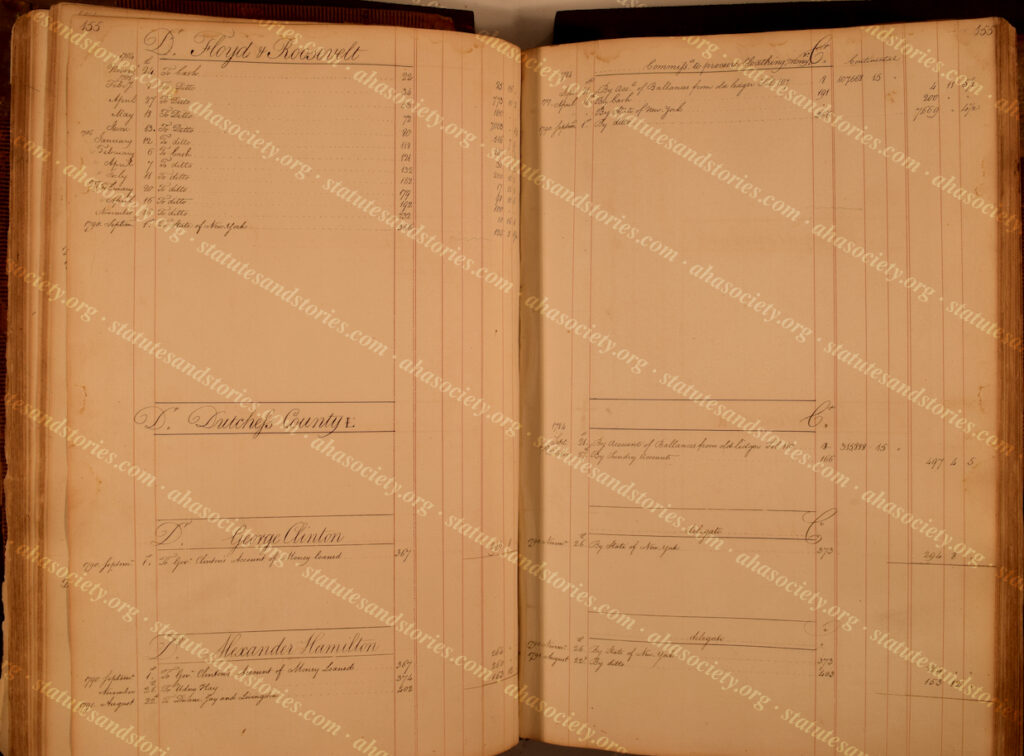 The images above only scratch the surface of the treasure trove in Albany waiting to be tapped. For example, graduate students could mine these records, in my view, on the following non-exhaustive list of topics that might provide a fertile field for PhD dissertations:

By way of background, in November of 1784 New York adopted its own state impost, which was expected to be the “cornerstone of Clinton’s recovery program.” As detailed by Kaminski, annual revenue from New York’s state impost ranged from $100,000 to $225,000. This revenue stream represented between one-third to one half of the state’s annual income. For Clinton and his base of yeomen farmers, the income from New York’s state impost on foreign imports not only helped subsidized low real estate taxes for New York farms but also allowed Clinton to pay salaries to his supporters on the state payroll.

During the debate over the proposed federal Impost of 1783, Abraham Yates and John Lansing were leading figures opposing Hamilton’s proposal to empower federal tax collectors loyal to the Confederation Congress.

In particular, harkening back to abuses by British tax collectors, Abraham Yates feared that “collectors, deputy collectors, comptrollers, clerks, tide-waiters, and searchers” would create an oppressive federal bureaucracy. Others feared that unrestrained federal tax officials would be a source of corruption, intrigue and cabal. Based on these objections – and no doubt influenced as well by New York’s parochial local interest, in 1784 and 1785 the New York legislature rejected the proposed Impost of 1783. Of course, New York’s veto enabled Governor Clinton to continue collecting valuable state impost duties on ships using the port of New York.

For Kaminski, Clinton’s intransigence over the Impost of 1783 was based on an understandable, but parochial commitment to New York above the larger interests of the Union:

The governor saw the benefits derived from this horn of plenty; after all the ill treatment the state had received from its neighbors and from Congress, Clinton was reluctant to surrender New York’s most valuable asset-an asset that would greatly benefit the yeomen who formed the great bulk of the governor’s supporters.

Internet: please report back what you find.